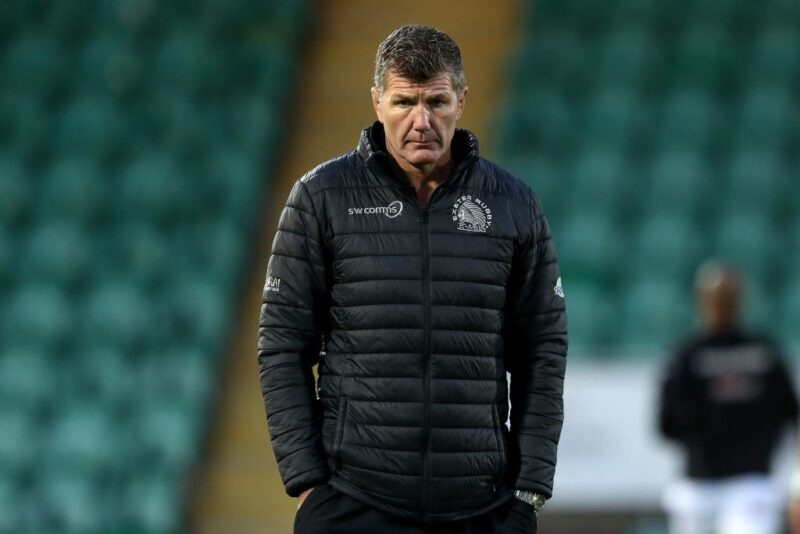 Exeter Chiefs director of rugby has accused Northampton boss Chris Boyd of playing mind games in the lead up to their Champions Cup quarter-final this weekend.

Saints have managed to avert a crisis after EPCR yielded to the club’s requests to be given dispensation to register Alex Seville, who Gloucester have allowed to move on loan to Northampton as emergency injury cover.

And while Baxter supports the common sense around that decision being reached, he took objection to a comment by Boyd over how Exeter could treat lone remaining fit loosehead Manny Iyogun.

With all four senior options injured for Saints, Boyd noted that when Iyogun came on after 24 minutes at Welford Road to pack down against Dan Cole last weekend the England and Lions tighthead “was kind to him on a couple of occasions”, adding: “The attitude Exeter take in the scrums will determine whether they go to uncontested.”

Baxter responded: “What does that comment mean? That Northampton will go to uncontested scrums but not if we do not push? It was a weird comment all round, made to influence. It is a quarter-final, not a pre-season friendly, but EPCR made a sensible decision.

“We played Northampton a couple of weeks ago in the Premiership at Franklin’s Gardens. We had a tighthead on the bench who came on [after an hour, Alfie Petch] not having played in the league before. I cannot remember there being anything in the Press about there being an issue over a 20-year old guy playing his first Premiership minute.

“We do not know how long Alex Seville has been training with them. He came on for Gloucester against us last week so he is more than capable of surviving against our front row.”