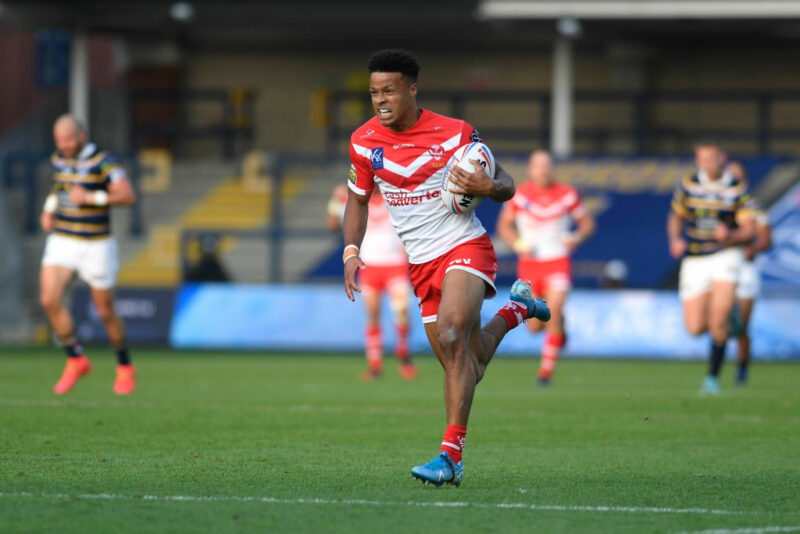 Regan Grace, the Welsh flyer whose amazing hat-trick for St Helens has been acclaimed as the greatest in Super League, is eligible to play for England.

The revelation, confirmed by the man himself in an interview with The Rugby Paper, will intensify interest across the Rugby Divide in the future of the uncapped 23-year-old wing from Port Talbot.

Grace’s contract at St Helens runs out in November next year, leaving the Welsh Rugby Union ample time to prepare a deal aimed at bringing him home for the 2023 World Cup. Eddie Jones could see him as offering the potential to be a latter-day Jason ‘Billy Whizz’ Robinson.

Asked about his dual eligibility, Grace said: “My dad (Leroy) is from Birmingham. I am aware that would make me eligible for England but it’s something I haven’t thought about.

“I’m happy where I am, playing for a great club. Until Saints came along, I thought I’d missed the chance of playing professional rugby. As a kid, Jonah Lomu was my big hero, then Shane Williams and Jason Robinson.’’

At 5ft 10in and under 13 stone, Grace is more like the British greats than the colossal All Black. “Most people reckoned I wasn’t big enough but there is no substitute for speed,’’ he said.

“That’s something you can’t teach. I owe my mother (Debbie) a lot. She would go out and get me boots or shoulder pads. She always made sure I was on the right track and did the right things.

“It was tough at the start, being away from home and my friends. I’d go back to Port Talbot most weekends in the early days but then I realised that the environment at Saints was perfect for me. It allowed me to concentrate on the challenge of making myself good enough without any distractions.’’

The video of Grace’s hat-trick against Leeds – the first from 90 metres, the second an acrobatic one-handed finish, the third from his own in-goal area – has gone viral. “My first thought with the last one was not to get caught behind my own line,’’ he said. “I was just trying to get out and find some space.

“I’ve been overwhelmed by the reaction, lots of messages and phone calls.

A lot came from people who said they hadn’t watched Rugby League before but they would be following it now. Bringing in new fans is very important. I’ll just carry on as usual trying to do my best.’’

Chris O’Callaghan, the former Aberavon player and coach, put Grace on the road to St Helens as a 17-year-old from the famous junior club Aberavon Quins. “Regan was on the Ospreys radar in the very early days,’’ he said. “He was in their under-age set up along with another boy, Calvin Wellington, but nothing happened and they dropped off their radar.

“Regan had a glittering career in Welsh youth rugby although he didn’t get capped. The Ospreys seemed to lose interest with the result that he and Calvin fell through the system.

“I knew the St Helens chairman Eamonn McManus and the head of their academy, Mike Rush. I told them: ‘Look, these boys (Grace and Wellington) are too good to turn down. If you don’t do something fairly quickly, you’re going to lose them.’

“They signed them. Calvin played one game but Regan, whose background is in Rugby Union, stuck at it. Everyone thought he was too small but he’s defused that perception quite brilliantly. Now the world’s his oyster.

“I pay tribute to Saints for nurturing his talent and having the perception to recognise his ability. As we always say in the Latin Quarter of Port Talbot: ‘Ability without opportunity is nothing.’

‘’In League they tried to bombard him with high balls. He’s worked hard to eradicate that perceived weakness to the point where opposing teams will think twice about giving him the chance to run from deep.

“He is now officially the fastest man in Super League and anyone who’s seen his hat-trick against Leeds won’t be surprised.  He won’t be fazed by that because he’s never been fazed by anything.

“Regan’s got the one quality you can’t coach – blistering pace. He’s a proven finisher on a worldwide scale. He’s the same now as he’s always been – a very laid-back, very level-headed, very nice guy. He always comes back to his old club, Aberavon Harlequins, ever willing to donate something to help.’’