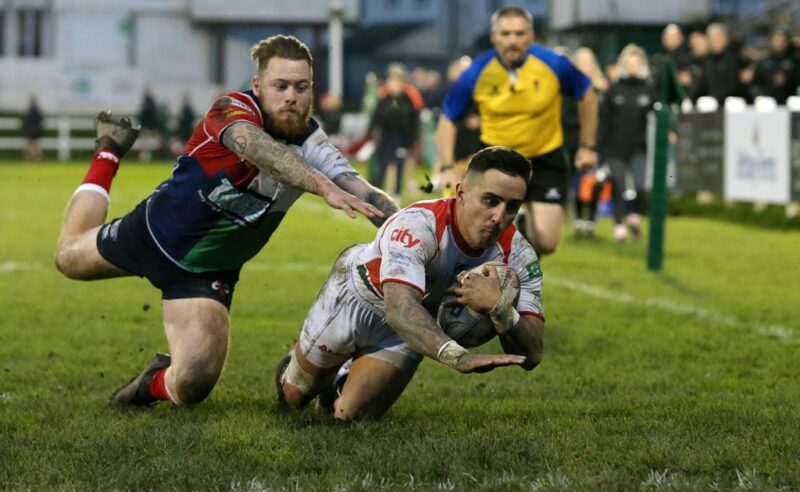 Plymouth Albion owner Dave Venables has accused the RFU of displaying “Dickensian authoritarian arrogance” after seeing his club docked 20 points and effectively fined £20,000 for a minor clerical error relating to payments to players.

Albion will start the National One campaign on minus-five points, with a further 15 points suspended, after being found guilty of ticking the wrong ‘Yes-No’ box in relation to ‘material benefits’ being paid to players during the truncated 2019/20 campaign.

Despite Albion managing director Max Venables, subsequently seeking clarification three days before the RFU’s deadline for submission, Plymouth were informed the declaration could not be amended as disciplinary proceedings had already been opened.

In their judgement, the RFU found there was no attempt to mislead, no dishonesty, no financial benefit to the club and that it was a genuine administrative error on Plymouth’s behalf. However, swingeing punishments were still handed down.

Albion’s appeal was thrown out and Dave Venables, who pumped £400,000 into the Brickfields outfit to save it from liquidation in 2016, has lambasted the RFU in a hard-hitting letter to Twickenham in which he lays bare his emotions.

Defending his son Max, who was responsible for the initial box-ticking error, Venables wrote: “I am both disappointed and ashamed by the actions, attitude and position the RFU and the members of the disciplinary committee have taken over this issue.

“It was no more than an innocent clerical error made by a ‘rookie’ administrator who has worked tirelessly to turn around a club from struggling for survival to a happy, friendly and hospitable club in addition to a profit-making business in its own right.

“Quite why the disciplinary panel, including a Silk, would see fit to have a need to go as far as to impose punishment on a member club for an inconsequential administrative error escapes me.

“Indeed, it flies in the face of the ethos, nature and character that once epitomised Rugby Union.”

Venables added: “It occurs to me that the disciplinary committee have behaved with a level of Dickensian authoritarian arrogance.

“Imposing the deduction of 20 points in addition to withholding the much needed £20,000 travel support grant is akin to strapping a medieval soldier to a gun carriage wheel and whipping him, in-front of his company, simply for failing to polish all his tunic buttons!”

Venables concluded: “Sadly the RFU appear culturally and spiritually illiterate. While focusing on the BIG funding from international corporate sponsors, who might yet turn out to be predators, they choose to PUNISH members of the rank and file.”

I have read the findings of the RFU Disciplinary Committee and their further decision regarding the appeal.

I am not surprised by the outcome but admit to being both disappointed and somewhat ashamed by the actions, attitude and position the RFU and the members of the disciplinary committee have taken over this issue. It was no more than an innocent clerical error made by a ‘rookie’ administrator who has worked tirelessly to turn around a club from struggling for survival (following its near insolvency) to a happy, friendly and hospitable club in addition to a profit-making business in its own right.

Faced with impeding liquidation in 2016, I rescued your rugby ‘union’ member club, Plymouth Albion RFC. Not wanting to see a club whom I had played for over 100 times go to the wall and in the absence of any support from Twickenham, or indeed any other ‘union’ saviour, I stepped up to the mark to rescue the club. It has cost me and my family circa £400,000+ to save your ‘union’ members club from liquidation.

I stress the word ‘union’ because it is a value I hold as important and a fundamental quality that I hold dear. Indeed the nature of Union an important value that once made rugby union the finest team sport in the world. Quite why the disciplinary panel, including a Silk would see fit to have a need to go as far as to impose punishment on a member club for an inconsequential administrative error escapes me.

Indeed it flies in the face of the ethos, nature and character that once epitomised Rugby Union. It occurs to me that the Disciplinary Committee have behaved with a level of Dickensian authoritarian arrogance. I am minded of the adage:

“Laws are made for the guidance of wise men but the instruction of fools.”

I must further respectfully add:

“Wisdom is a state of the human mind characterised by profound understanding and deep insight. It is the consciousness of wholeness and integrity that transcends rules, often referred to as ‘Common Sense!”

Indeed, the manner in which the RFU have addressed this issue appears characterised with meddlesome self-importance of petty bureaucrats at virtually every level. Whilst rules are important in the governance of organisations, they are not enough! Practical wisdom requires the use of wise improvisation! In the service of the right aims, the wise person will ‘bend the rules’ in the service of good and natural justice. One might expect better from a Silk! Then again perhaps not?

Rules should not be followed blindly; particularly where following said rules will cause disadvantage or be detrimental to a key objective. In these circumstances, there may be a more effective procedure. Effective leaders need the moral skill and the moral will to improvise effectively at the appropriate times. Virtue and wisdom are almost inseparable.

The challenge facing organisations and society at large is that developing wise people requires a degree of freedom to make mistakes and learn. Imposing the deduction of 20 league points in addition to withholding, the much needed £20,000 travel support grant is akin to strapping a medieval soldier to a gun carriage wheel and whipping him, in-front of his company, simply for failing to polish all his tunic buttons!

Might I invite the committee to see the wider picture in this scenario?

Plymouth Albion Rugby Club, a member of the Rugby Union was in major distress and in administration facing insolvency. The RFU did not turn up on site with help, advice and support, instead our rugby fathers remained comfortably numb to the desperate position this member club was in.

In the event, I stepped up to the plate and rescued the club from insolvency. I repeat, lest you fail to grasp the reality of my personal funding commitment; I introduced circa £400,000 of my own monies to save the club. Having steadied the ship we have as a family turned the club around and were due to announce (for a second consecutive season) a small profit before the Covid 19 lockdown.

I am a successful businessman who owns a recycling and demolition business. I have two sons. The youngest, Max Venables, just 30 years old, was working in my family business. In the event of stepping forward to rescue the rugby club, I was busy with my own company and unable to devote my time to administer the club’s affairs. I asked Max to take the helm of Plymouth Albion’s struggling ship.

Please be minded that Max came from a scrap business. He was certainly not experienced in RFU administrative requirements, but in the interest of saving the rugby club, Max with some reluctance, stepped into the breach. For the purpose aiding the disciplinary committee apparent ‘sketchy’ knowledge and understanding of the atmosphere and circumstances pertaining to the role of taking the helm of a struggling company rescued from the jaws of insolvency is NOT an easy seat to hold.

Recruited from the recycling and demolition industry, young Max gave of his all to save the club and turnaround its ailing affairs. An independent observer would likely draw the conclusion that Max, and my family, have giving excellent service and support to the notion of the ‘union’ we know as the RFU and the wider rugby world they represent.

In his naivety Max made an error filling in a Tick Box – He agrees that he was unsure of the question and misunderstood the import of the ‘other pecuniary benefits Yes – No’ boxes. In his genuine ignorance Max contacted the RFU to query the question and the box he had ticked, believing it to be honest and truthful.

Indeed, there being some time before the deadline for submitting the said form to the RFU, Max contacted Twickenham to request help and advice to make the appropriate correction in the interest of honesty, expediency and progress.

In their judgement the committee acknowledged that there was:

• NO Intent to mislead,

• NO financial benefit to the club

• It was a genuine administrative error.

Reading the deliberations and findings of the learned disciplinary committee, I virtually lost the will to live, wading through the legal beagle jargon confusing to ordinary people!

Clearly the committee are content with their deliberations and sanctions. Noting a similar scenario with the affairs and disciplinary case of Rams RFC, over the same alleged transgression, the path appears clear and one suspects, predestined. Indeed I suspect the outcome of our hearing was determined even before Plymouth Albion presented their case.

“These are the NEW BOYS on the block let us, The BIG BOYS at Twickenham mark their card and show them where they stand, and they must ‘Fag’ for us in a time honoured traditional manner!”

The good people of Plymouth and a wider cohort of genuine rugby union supporters donated to a crowd funding initiative promoted by Max on behalf of the cash impoverished Plymouth Albion. Bear in mind Coronavirus robbed the club of a £100,000+ end of season income stream from prestigious home fixtures and end of season activities.

In unprecedented circumstances of difficulty the UK Government stepping forward with various rafts of support for the nation’s business community and its citizens in general. Conversely our Twickenham Fathers saw fit to deduct of 20 league points from the club’s future endeavours and to further withhold a desperately needed, £20,000 in legitimate travelling expenses.

The outcome of Albion’s disciplinary case and appeal was not known by the club when Max launched a Crowd Funding initiative to help make up the serious shortfall resulting from the Coronavirus Lockdown. Do I advise Max to make known the position that the RFU are withholding £20,000 of central funding? The good people donating their £10, £20 and larger sums did so in good faith blissfully unaware that their generosity and support was to be undone by the RFU who chose to PUNISH the club thereby effectively making our appeal under false circumstances?

The law is sometimes referred to as ‘An Ass’.

It occurs to me that this adage fits well in this scenario. Yes, Max, and I suspect others at the struggling club were in error and a mistake was made… But … this is Rugby where we hold the values and ideals of union where members help and support one another to mutual benefit

The quality of mercy is not strained;

It droppeth as the gentle rain from heaven

Upon the place beneath. It is twice blest;

It blesseth him that gives and him that takes.

Sadly, the RFU appear culturally and spiritually illiterate. Whilst focusing on the BIG funding from international corporate sponsors, who might yet turn out to be predators, they choose to PUNISH members of the rank and file.