By Neale Harvey
Gloucester chief executive Stephen Vaughan insists he has no qualms over the acquisition of convicted South African drugs cheat Gerbrandt Grobler.
Former Western Province and Stormers lock Grobler was banned for two years after admitting to taking the anabolic steroid Drostanolone during the 2014 Currie Cup.
Grobler, now 26, sat out the 2015 and 2016 Super Rugby seasons before resuming his career with Top 14 side Racing 92 for the 2016-17 campaign. He then joined Munster, helping the Irish province reach last season’s PRO14 final.
Munster were heavily criticised for signing the player and Gloucester are now facing similar scrutiny. However, Vaughan told The Rugby Paper: “The thing about Grobler is he was young, daft and he’s held his hands up.
“He was injury prone and thought his career was going nowhere and he took bad advice, but he’s served his penance and since then he’s played for two good clubs in Racing and Munster and played very well.
“He’s got an extremely good CV and Munster were incredibly positive about him as a guy, on and off the pitch.
“Can anybody say they’ve never made a mistake? For me, it’s a case of people in glass houses throwing stones really. He’s made a mistake, admitted it and now he’s playing good rugby so we’ll welcome him with open arms.”


Gloucester also raised eyebrows by signing four other South Africans, with lock Franco Mostert, hooker Franco Marais, flanker Jaco Kriel and prop Ruan Dreyer joining Grobler as coach Johan Ackermann reshapes his squad.
Vaughan denies the club’s commitment to English-qualified players has waned, insisting: “We will hit our EQP number.
“Although it looks like we’re just bringing in South Africans, we’ve also signed Danny Cipriani and Matt Banahan and lost non-EQP players like Ross Moriarty, Richard Hibbard, Matt Scott, John Afoa, Motu Matu’u and David Halaifonua.
“If people are going to point fingers and say we’ve got five South Africans, it just feels a bit ‘Alf Garnett’.
“When we had Moriarty, Hibbard and Owen Williams nobody said we had too many Welsh lads. Johan’s just added some lieutenants he knows personally so there’s no issue.”
Meanwhile, Vaughan says being back in the Champions Cup for the first time since 2013-14 is worth upwards of £250,000.
Having seen his club pooled with Exeter, Munster and Top 14 champions Castres, Vaughan said: “The difference between being in the Challenge Cup or Champions Cup is £250,000 to the bottom line… and more if you progress.
“We know we’ll have a minimum of two sell-outs and that affects membership sales, plus bar and hospitality takings. If we do get through, the quarter-final is a money-spinner.”
Gloucester, for many years one of the Premiership’s few profitable clubs, lost £1.1m last year and will be in the red again this year, but Vaughan added: “I’m not concerned because we have clear plans to be sustainable.
“We’ve invested a big chunk of money in players and facilities, with a new pitch as well, but it’s a ‘controlled explosion’. We’re not going in blind, we want to be a top six club competing strongly in both top competitions.”

The Rugby Paper is on sale all year round! Keep abreast of the June internationals and your club’s activities in the off-season by subscribing: http://bit.ly/TRP-Sub 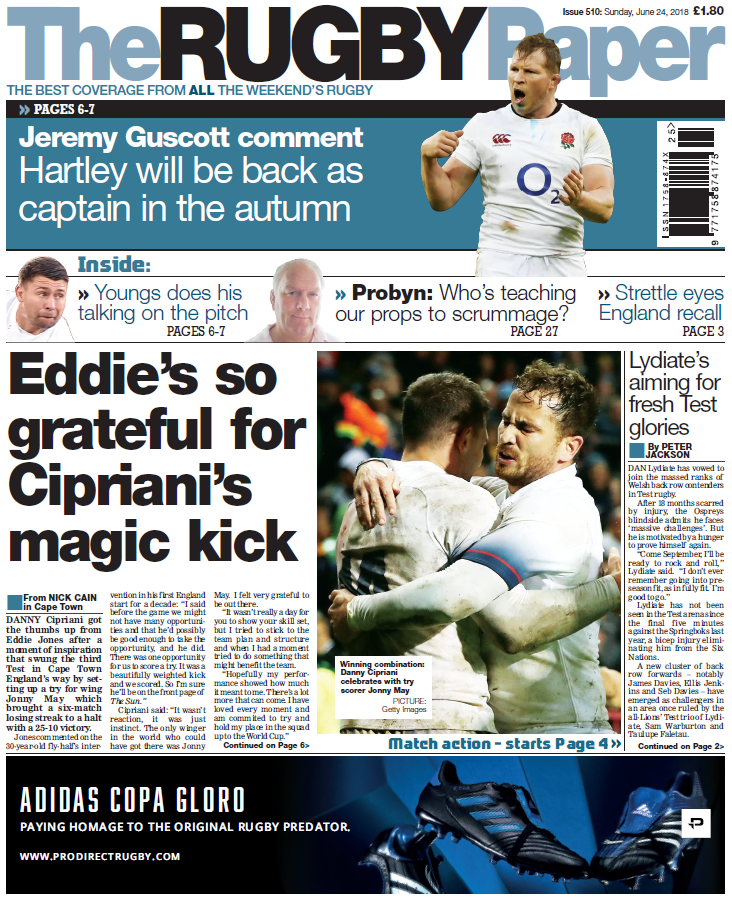