The lingering questions for England heading into the knockouts 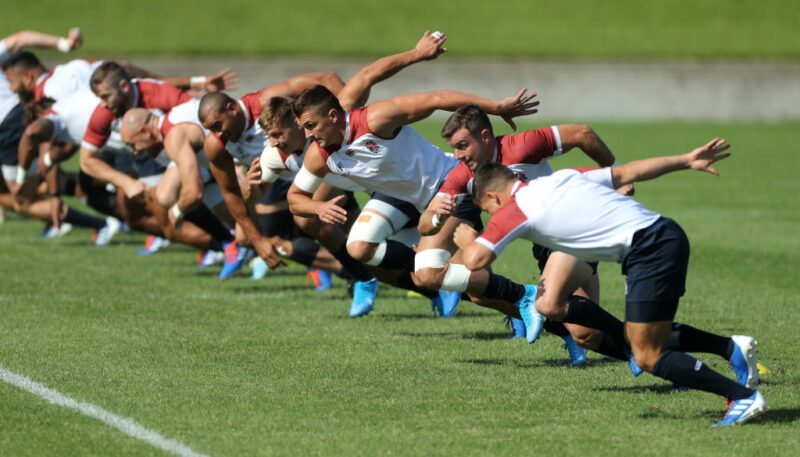 The considerable disruption Typhoon Hagibis has already caused may have accidentally offered Eddie Jones and England some sense of clarity as they head into the knockout stages of the World Cup as Pool C winners – having not even had to don a shirt against fellow qualifiers France.

No more questions on “throwing the game” to avoid New Zealand in the semi-finals. No more queries on team selection for the final pool match. No fretting on picking up a key injury heading into the business end of the tournament.

There are, however, a few lingering question marks as Jones’s men look towards the presumed clash with the Wallabies. Nothing major, maybe even a few positive headaches to mull over – but three main points spring to mind.

Should Jones maintain the course with the Ford-Farrell axis?

It wasn’t a long time ago that George Ford’s England career looked to be on the brink of destruction. Cast aside as Owen Farrell slotted back into fly half and the Tuilagi-Slade centre pairing blossomed, there are plenty who will say Ford only returned to the ten shirt because of Slade’s ill-timed injury heading into the tournament.

Nevertheless, Slade was injured – and Ford has owned his role ever since. Captaining during the warm up games and once at the tournament against the USA, his performances have been near faultless. Ford’s ability to take the ball to the line and commit defenders before putting runners into space is something that won’t have gone unnoticed by Jones – indeed even his performances with the boot have looked more assured than Farrell’s thus far.

With Slade now back fit (if not match fit), the question is whether Jones will stick with the in-form Leicester man. Despite his stellar World Cup to date, Jones may prefer Farrell’s physicality at first receiver against Australia. Still, with England set on a collision course with the All Blacks, Jones will do well to remember the effectiveness of the Sexton-Farrell axis during the Lions’ tour in 2017.

Farrell’s place is certain. Where along the line is yet to be confirmed.

Just how hurt is Billy?

Taking one specialist eight to the tournament was a move that was always going to garner attention, particularly if injury struck. With Billy Vunipola appearing in the public eye with his ankle in a cast on Tuesday, the what ifs and maybes around his fitness are firmly in full flow.

The younger of England’s Vunipola brothers is yet to set the tournament alight, but there’s no escaping his prowess as one of the most ferocious ball carriers in world rugby. He, his brother Mako and Farrell are arguably England’s three true all-world players, with Billy’s explosive running crucial to the team’s bruising up-front approach.

Right now, it would appear he’ll be fit to face the Wallabies. But what if he isn’t? Who plays there instead? What if he reinjures himself? If there is one true worry in the England camp right now, it’s the fitness of their talismanic number eight.

It’s fair to say that England’s tournament has gone quite well so far. Two tries conceded in three games, each one a romp. The dismantling of Argentina is of course the most notable victory, albeit it came largely against 14 men. The France game was to be England’s first real “test” – one they should pass comfortably, but a stiffener for Australia all the same. Now the clash with the French has been settled with a “N/A” 0-0 draw, has it been too easy for us?

England will have enjoyed over two weeks of R&R once their quarter final comes around, largely unscathed after three comfortable wins. The Australians, meanwhile, will have faced three decidedly physical encounters with Wales, Georgia and Fiji, and an additional fixture against Uruguay. England will be fresh, Australia will be sore, but battle hardened – which one is better?

The France game was a key opportunity for Jones to give back-to-fitness players valuable minutes. Henry Slade, Mark Wilson, Mako Vunipola and Jack Nowell are just a few big names in need of game time – but the opportunity to offer them it has been snatched away. England will head into their first knockout game confident, but the pessimists among the fan base might worry that things have gone too well so far, and a bit of bust up with the French might have refocused the collective mind.

As the storm closes in, England will have plenty of time to dwell on such dilemmas. A trip to Oita Stadium on the 19th will hopefully be proceeded by an extended stay in Yokohama where the semis and finals take place (you can view England’s route via Chapman Freeborn’s interactive map here).

While all of us hope the weather will be reasonable, England will be hoping for their best starting line-up, a fit Vunipola and that legs haven’t gone too cold during an unexpectedly lengthy break.