Posted on 29th September 2017 by Nick Verdier in Young Gun 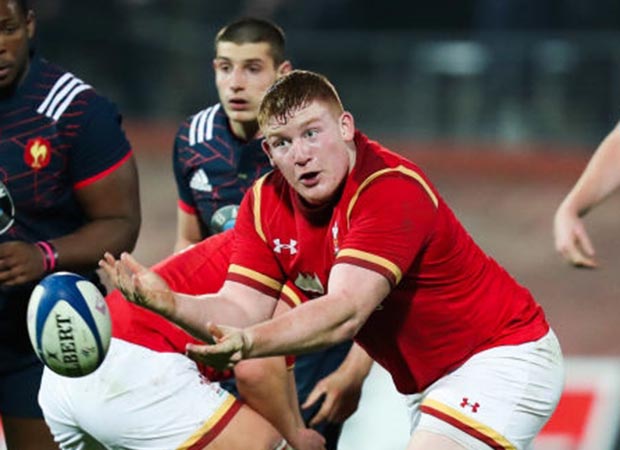 Rhys Carre already has the size and power to play senior rugby but he is fully aware his technique has to improve is he is to fulfil his childhood dream of one day wearing the Cardiff Blues jersey.

Standing at 6ft3in and a whopping 20st 6lb (130kg), the 19-year-old breezed through age-grade rugby and it was no surprise to see the Blues hand him a two-year academy contract last season.

But playing against men is no mean feat even for a physical specimen like Carre and he is working hard in training with the help of Wales legend Gethin Jenkins.

“As a young prop getting up to speed with the scrummaging has to be my main focus,” he told The Rugby Paper.

“Luckily for me my size gives me an advantage so I can focus on my technique to make improvements.

“It’s quite tough physically but it’s great to be able to play rugby and train full-time and I’m very much enjoying myself at the Blues right now.

“Having guys like Gethin with his huge international experience is tremendous. He’s one of the best looseheads in the game so it’s great for me to get feedback from him and he’s always happy to share his tips.

“Age-grade rugby wasn’t easy as such but there’s a lot more to scrummaging in senior rugby than just power. You have to get your technique right and there’s a lot to learn about.

“You come up against older and more mature player who know all the tricks. I managed to get a few good scrums going forward which is a very nice feeling.”

Before he can make the step up to the Pro14, Carre will have to earn his stripes in the Welsh Premiership which could also open the doors to the Wales U20s squad next year.

He added: “My main goal for the season is to train as hard as I can to improve, get used to the senior level and maybe make an appearance for the Blues towards the end of the season.

“I’m going to be playing for Cardiff in the Welsh Premiership which is a great competition for me to break into. I played a bit last season for them  but now I’m full time I’m hoping I can get more and more game time as the season goes on.

“I’ve been brought up in Cardiff and played for the Blues all my life so it’d be a dream come true one day put on the Blues shirt in the Pro14.

“It’d be great to get in the U20s squad again. I managed to play a year early which was nice so I’m hoping I can do it again and feature in the both the Six Nations and the World Cup in Argentina.”