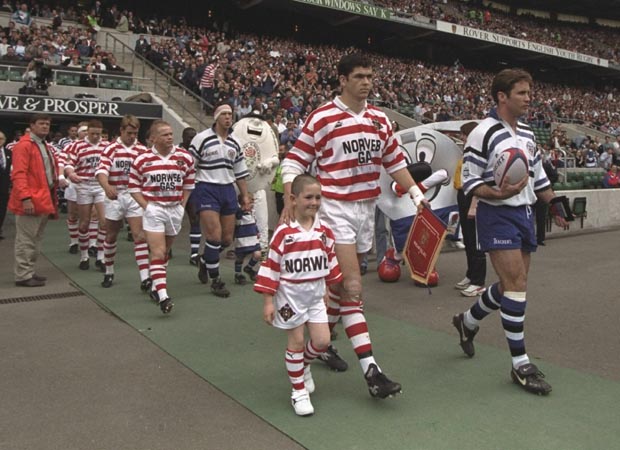 One hundred years of animosity and bad blood were about to be forgotten and an attempt made
to answer the age old question which was the better code, League or Union.
In August 1995 exactly 100 years after the North broke away from the Rugby Football Union to form the Northern Rugby Football Union the IRB declared Union an open game.
Payments to players were no longer prohibited meaning Union players would no longer be ex-communicated and declared persona non grata for switching codes. It also opened the door for two cross-code games two take place in May 1996 between the two power houses in each code.
Bath were at the peak of their powers and were about to do the league and cup double while Wigan were sweeping all before them in the 13-a-side game.
Both clubs would face each other under the other’s rules and Danny Sacco, now president of Bath Rugby, explains how the challenge first came about.
“An agent Alan McColm contacted Bath players who had formed their own company called The Bath Players Initiative but they couldn’t get the deal done.
“Twickenham wouldn’t play ball with them. So myself and David Bradshaw the marketing guy from Wigan started putting it together.
“I installed phone lines in the Teachers Stand, I had my wife and relatives answering the phones and off we went. In those days it was like East meeting West.
“Every time I went to Twickenham the frosty reception was unbelievable, they thought I was evil and were set in their ways and didn’t want to see the game take place,” he said.


It was then announced the first game under league rules would be played at Maine Road on May 8, just days after Bath lifted the Pilkington Cup against Leicester at Twickenham.
Phil de Glanville then newly appointed England captain recalls preparation was rushed and consisted of one training session against South Wales RLFC.
“We have celebrated appropriately on the Saturday night and then most of Sunday. Clive Griffiths gave us a Bank Holiday Monday training session in League.
“I think at that stage they were about Division Four. We were all hung over, had no idea what to do and we got absolutely thumped. We knew we were in big trouble.
“Until then we had been focused on the Courage League and the Pilkington Cup so that was a big shock. We weren’t very well prepared to say the least.
“I would say it is the only match I have ever been scared of in the changing room before hand because we were so under prepared and uncomfortable about that was going to happen.”
Wigan warmed up with a 76-8 win over Paris Saint-Germain and were about the show Bath no mercy Martin Offiah scoring six of their 16 tries. Jon Callard scored Bath’s only try.
Jason Robinson and Henry Paul who went onto play for Bath also scored as Bath felt the full force of the Wigan might going down 82-6.
“We did well to score one try. There were a lot of tackles, which is the nature of the game, up and back, up and back. They put the full team out and fair play to them,” adds de Glanville
“We were pretty dominant. And you have to remember that in rugby league you can run points up very, very quickly, We tried to make the game as quick as possible,” says Shaun Edwards.
In-between the two code clashes Wigan did the unthinkable at the time, they went to Twickenham and won the Middlesex 7’s beating Wasps in the final. Edwards now Wales assistant coach who was Wigan captain at the time had captained England U16s at Union before signing professional forms with his home town club.
He insists that at no stage did Wigan think that they stood a chance of winning the return game at Twickenham.
“We had practice matches against Orrell and soon realised that the dark arts of Union in terms of scrum and breakdown were going to be incredibly difficult.
“We were pretty hopeless at it but the big thrill for us was to play at Twickenham both in the Sevens and in the game against Bath.

“But after the League match Nigel Redmond came up to us and said see you at Twickenham,” laughs Edwards. “He couldn’t wait to get us in the scrum. We were pretty hopeless. People actually thought we could win the union game but I knew we didn’t have a hope in hell.
“We represented League well in the Sevens when we won that because we played some attractive rugby. Even in the final we got absolutely battered in the contact area but got scraps of possession and scored some decent tries.”
Returning to the scene of their Pilkington Cup win, Bath were quick to put Wigan to the sword running into a 25-0 half time lead before pushing onto win 44-19.
Adedayo Adebayo scored two tries while Jon Sleightholme, Mike Catt, de Glanville, Ian Sanders and a penalty try completed the rout. Craig Murdock (2) and  Va’aiga Tuigamala scored Wigan’s.
Sleightholme, who famously skinned Jason Robinson for his try, had several chances to play League. He remembers referee Brian Campsall trying to calm the Bath forwards before kick-off.
“He (Campsall) came into the dressing room and said, joking aside, we know this is going to be one-way traffic but be sensible in the set-piece, especially the scrum. We don’t want anyone going off on a stretcher really badly hurt. It did kick off after the first scrum a few fists flying and I am sure Graham Dawe had something to do with that.
“It was great to see the reversal of the apprehension we felt at Maine Road, there was going to be a bit of pay-back. Terry O’Connor told me recently that they were absolutely petrified at the scrum stuff and when we have got the likes of Nigel Redmond, Andy Robinson and Graham Dawe, they aren’t the type of person you can have a sensible conversation with about taking it easy.
“You cross the whitewash and it is on. Even though Graham had got a pair of white boots to mimic Henry Paul who had worn white boots in the League game,” he said.
RFL chief executive Maurice Lindsay predicted the two codes would come together within five years but they never did.
And, even though everyone agrees both sides ended up with a healthy respect for each other, did it resolve the age old argument?
No not really.
*This article was first published in The Rugby Paper on August 24.