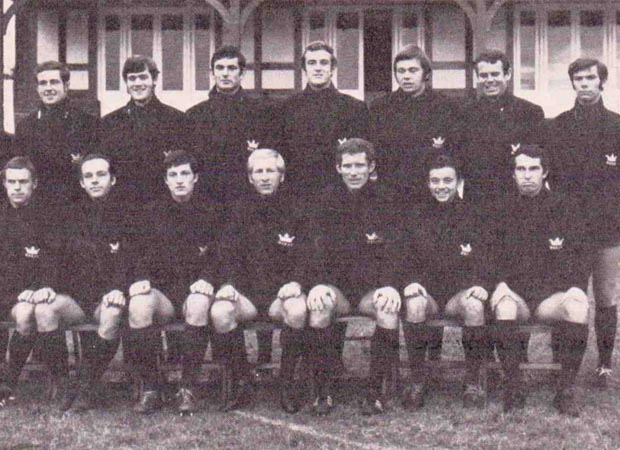 South Africa’s 1969-1970 tour to Great Britain and Ireland remains to this day one of the most controversial in the history of rugby union. South Africa’s ruling National Party introduced a system of racial segregation called Apartheid in 1948 and it would run through to 1994 after the release from prison of Nelson Mandela.
International sports tours and matches had become a focal point of cultural identity for white South Africans and the Springboks’ touring party was made up entirely of Afrikaners.
They were seen as heroes to the majority of the white ruling classes in South Africa and immediately there were calls for the tour to be scrapped but these were ignored.
The anti-Apartheid movement decided to disrupt the tour with an eye, too, also on the upcoming South African cricket tour scheduled for the summer of 1970.
The scheduled visit of the rugby Springboks to Iffley Road in November 1969 was supposed to celebrate the centenary of the Oxford University Rugby Club but turned into something far more political.
Despite the politics involved, Oxford skipper Chris Laidlaw, already an All Black, doesn’t recall any pressure being put onto the team to pull out of the game.
“My college authorities probably didn’t even know the game was on. The matter was certainly never raised with me. The university didn’t discuss it as such but several prominent academics publicly questioned the wisdom of the Oxford name being associated with a racially selected team,” he told TRP.
But one member of the team, flanker Steffan Jones, admits that he did consider pulling out of the game and recalls the reaction of a friend opposed to him playing. “I nearly didn’t play because I sympathised with the demonstrators but came to the view it’s better to play, or else where do you draw the line, and which teams don’t you play against?
“I did talk to Chris Laidlaw about it a bit, I did have the chance to go on a London Counties tour of South Africa a little bit later and I was No.
“A year before the game I was in the High Street in Oxford asking people to boycott Cape Fruit, but I did feel a little bit guilty I must say.
“A good friend came to see me later and told me she was disgusted. She had been one of the demonstrators and it took quite a lot of time to rebuild our friendship,” he said.
The threat of violence from the Stop The Seventy Tour campaign meant that an alternative venue to Iffley Road, Oxford, had to be found.
Laidlaw says: “There were doubts the game could be played. There were direct threats to disrupt it if we played at Iffley Road and those were taken seriously. I was asked by the RFU if I thought we could handle this and was obliged to say I didn’t know.
“All I did know was that determined protesters from around the UK were intent on stopping it. A few days beforehand the words, ‘stop the tour or else’, were sprayed onto our pitch in weedkiller.”
The decision was left in the hands of RFU President Dudley Kemp from Hampshire who wanted the game played at the United Services Ground in Portsmouth with a Royal Marines armed guard.


This idea was rejected on the Monday evening by Prime Minister Harold Wilson, saying it was the democratic right of people to protest.
And it was not until late on the Tuesday evening that it emerged that the game would be played at Twickenham.
Peter Hain was Stop The Seventy Tour campaign chairman. Now the MP for Neath, Hain, then a 19-year-old student, has clear memories of waiting for a telephone call to mobilise his fellow demonstrators.
“The new venue was kept secret but Bob Trevor, a friendly Welsh sports journalist with the London Evening News, had promised to phone us immediately the press were informed.
“At 9.30 the night before, our phone rang and his familiar voice said, ‘Twickenham, 3pm’, I immediately relayed the news.
“Over 1,000 rushed to the ground and we all purchased tickets, grouping together in the main stand. The match took place under siege.
“Midway through I spotted an opening in the police cordon and tried to jump over the spectator fence, but was immediately grabbed, carted out and dumped on the pavement,” he said.
While centre Doug Boyle recalls that the team were not told until almost the very last minute that they would be playing at Twickenham, there had been time to mobilise 500 policemen, who managed to ensure the match was completed.
“We didn’t know pretty much until the day of the match. We got on a coach and somebody said it’s going to be Twickenham.
“They only told us at the last minute because if they broadcast the news they would have had even more demonstrators.
“And when we got there at least 50 per cent of the crowd were anti-Apartheid demonstrators. And only the West Stand was full,” added Boyle.
Oxford had warmed up for the game with a 13-9 win over Cardiff a few days earlier and prop Richard Griffiths feels that the university were, in rugby terms, playing the tourists at the right time.
“I don’t want to downplay what we did. But we were lucky.
“It was the first match of the tour and I don’t think they were completely match fit.
“And because of the politics
surrounding us playing them, and them being so grateful that Oxford University had agreed to play them, that they were told behave themselves,” he said. Hooker Julian Malins is quick to acknowledges the work that skipper Laidlaw had put into drilling nearly every mistake out of the university game.
“The captain was the coach and the captain chose the team and there was none of this management business. We trained as a team,” he said.
“Chris was the best scrum-half in the world at the time and he drilled us and everything that was done was done perfectly.

“There was none of this business of mistakes, he eliminated mistakes. When we scrummaged he put the ball in straight but, like a genius, at an angle so it could be hooked.
“I could see from his muscles exactly when he was coming in, he also brought to these islands the spin-pass from scrum half.
“It was Chris who taught it to Gareth Edwards, I was there when he did it. And the Springboks made the mistake of having Tommy Bedford on the sidelines and not playing.
“They underestimated us.
“We had Peter Dixon and Peter Torry in the back-row and they were two of the best back-row players in the country at the time.
“And Rod Speed was one of the best props.
“So we had a very, very good team. The key was the two stars in the pack and one world class star running it from scrum-half.
“The Springboks were unfit and thought that the first game was going to be a piece of cake and by the time they woke up and needed to roll over us they started to make mistakes,” he said.
The Springboks started well with Piet Visagie landing a penalty goal but at half-time Oxford had taken the lead thanks to two Mike Heal kicks.
Laidlaw says that it was only at half-time that they believed they could win which they did after Visagie missed a last-gasp drop-goal.
“We didn’t really expect to win it but we knew we had as good a team as Oxford had had for decades and realised that by half-time we had a real chance.
“It was one of the best games I have ever played and the rest of the team desperately wanted to strike a blow against the Springboks partly because of the misgivings we all had about what that team represented.
“And our forwards were a highly underrated outfit.
“The Springboks were genuinely shocked by the extent to which we ran them round. We had a variety of other innovative tactics including short lineouts.
“And the use of a double backline using blindside wing and two loose forwards on defence and this caught the Springboks off balance.”
*This article was first published in The Rugby Paper on August 31.