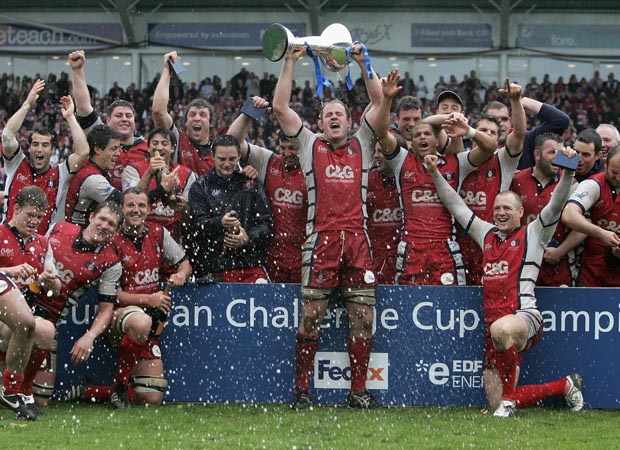 Cup finals are often tight, tense affairs decided by a mistake or controversial penalty. But not on this particular occasion as two sides packed with current and latent international talent defied sodden conditions at a packed Twickenham Stoop to produce a seven-try thriller that was decided deep in extra-time by a remarkably energetic kick and chase by Gloucester’s gifted No.8 James Forrester. It was shame that Forrester was destined to never reach such heights again, as injuries intervened thereafter to deny him the startling Test career his sumptuous skill-set deserved.
A look at the two backlines says everything we need to know. Irish, revitalised under the enlightened management of Brian Smith and with bright-as-a-button assistant coach Toby Booth in tow, included Mike Catt, Delon Armitage, Topsy Ojo, Sailosi Tagicakibau, Riki Flutey, Paul Hodgson and kicking-king legend Barry Everitt in their ambitious selection, while the Cherry & Whites, under new management themselves that year after Dean Ryan succeeded Nigel Melville as director of rugby, fought fire with fire by rolling out the likes of James Simpson-Daniel, Mike Tindall, Anthony Allen and livewire scrum-half Pete Richards, all with points to prove to England’s selectors.
This European Challenge Cup final was truly one to savour and for older members of the Gloucester side, it offered a chance of redemption. Flanker and club legend Andy Hazell recalls: “We’d been to cup finals before and lost and, for a lot of us, memories of losing the 2003 Premiership final to Wasps were still raw. We’d been tagged ‘chokers’ for losing that and some other big games and we’d had a bit of heartache which had taken a while to recover from, but in 2005-6 we had a really tight group of blokes – a good mixture of experience and youth – and we were desperate to put some silverware in the cabinet and show what Gloucester rugby was really all about.
“London Irish were a bloody good team that day, with guys like Bob Casey, Nick Kennedy, Juan Leguizamon and Olivier Magne in their side as well as all their star backs. But we had a lot of young lads like James Forrester, Jon Pendlebury, Ryan Lamb, Luke Narraway and Anthony Allen coming through as well and we also had some pretty hard-nosed operators of our own in the pack, so it was one of those games where we didn’t look at the opposition too much before. In other finals and big games we’d spent time worrying what teams would do to us, but before this final we did just work on ourselves and the majority of our preparation was about what we were going to do.”
Irish led early, but tries from Mark Foster and Hazell cancelled out an Armitage effort to give Gloucester an 18-13 half-time lead. Recounting his own score, Hazell says: “It was all down to Pete Buxton really. He used to love a maul did Pete – ask him what he wanted to do in training and he’d maul all day – so Dean and Carl Hogg had worked with us constantly for the previous two weeks on this maul that went round the front of the lineout, using Pete as a human shield with me sitting behind him. We still used it last year until Pete retired and it rarely worked, but on this day it did and it actually led to my try in the cup final. Sheer genius really – or so Pete would say!”
Everitt and Ludovic Mercier – on for the injured Lamb – traded penalties after the break, but Gloucester looked to have the wrapped up proceedings when Simpson-Daniel intercepted Casey and screamed in from halfway. Gloucester led 31-19 with ten minutes of normal time remaining, but Irish summoned the courage to hit back and when hooker Robbie Russell followed Magne over the line for the second score in quick succession, Everitt was left with a conversion to win it. “It was a case of ‘oh no, here we go again’,” Hazell recalls. “All we had to do was see the game out, but Irish scored twice and suddenly we’re staring down the barrel of having that chokers tag again.”
But this time Gloucester got lucky as Everitt missed his kick, meaning it was 31-31 and into extra-time. Ryan rang the changes by introducing fresh legs and despite Everitt kicking Irish 34-31 ahead, the game was decided by Forrester who capped a fine personal display when, following great work by Richards, Simpson-Daniel and Allen, he chipped over the Irish rearguard and beat the cover defence to touch down. “I got the man-of-the-match award – a lovely bowl that’s sitting proudly in my office – but my main memory of the day is Jamie scoring that try,” says Hazell.
“I’ve never experienced another player like him and God knows how many caps he’d have won without his injuries. His physique was different and he could bend and twist through tackles. We used to smash him in training but he wouldn’t go down and you’d just slip off him. He wasn’t in the gym all the time but he had all the skills and a knack of being in the right place at the right time, so we’d often use him out wide, a bit like Leicester with Tom Croft. It was a tragedy that he had to finish his career early but his try against Irish was fantastic and is one of my best rugby memories. It wasn’t the Premiership medal we craved, but it was a cup win we worked hard for.”