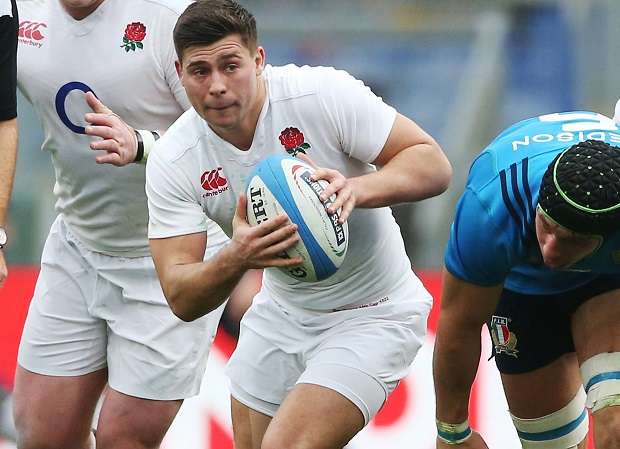 Bullish Ben Youngs reckons England’s tourists are ready to shock Australia next month under the belligerent leadership of Eddie Jones.
Having captured a Six Nations Grand Slam at the first attempt, Jones has made no secret of his desire to move England into the world’s top three.
A three-Test series against the World Cup runners-up offers that chance and Youngs believes he and his Red Rose teammates can thrive under Jones.
He told The Rugby Paper: “Coaches are always different but, for me, the most impressive thing I’ve found with Eddie is how he interacts with the squad.
“When you’re on the pitch you work very hard but he also understands when you’re off it you can relax around the hotel and switch off.
“He’s great at instilling team belief and individual belief and I really enjoyed that. He gave me huge confidence to just go out there and play.
“I like Eddie’s bullishness; he doesn’t mince his words, he says what he believes and it’s easy for players to buy into that mindset and attitude.
“It’s different now, I love it, and going down to Australia is something this side is ready for.
“We’re coming off the back of a Six Nations Grand Slam and now we want to see where we are against the Southern Hemisphere. There’s going to be a good test for us down there and it’s a tour we’re all desperate to be part of.”
Despite featuring in all of England’s Six Nations matches, Youngs refuses to take his place for granted having lost the No.9 jersey to Danny Care against France.
Youngs has been in good form for Leicester but still throws in the odd poor game – an annoying trait the 26-year-old is battling to eradicate.
He explained: “Every player wants to be really consistent but sometimes it’s harder than you’d like and that can be very frustrating.
“But the big thing at Leicester under (head coach) Aaron Mauger now is that he’s very good at telling you not to get caught up in the moment. If something goes wrong or a game doesn’t go right, he makes sure you don’t lose sleep.
“Mauge gets you back on task and taps into the things that make you perform well again the following weekend, which is great.
“Lots of people are competing for tour spots and it’s an important couple of weeks now to really put my hand up and stake a claim. Eddie will be analysing everything we do, so I’ve got to concentrate on being as good as I can be.”
Youngs looks certain to travel and having starred in a drawn series against the Wallabies in 2010 and again for the British & Irish Lions on their successful tour Down Under in 2013, the 57-cap scrum-half’s experience could prove vital.
Despite England’s heavy World Cup loss to Australia, however, he insists revenge will not be on his mind. He said: “The Wales defeat probably felt more like that going into the Six Nations, but against Australia we were well beaten.
“The scoreline shows they were by far the better team, so this tour is not about revenge, but for proving we can be a good team.
“I’ve got great memories of Australia and it’s a great place to tour. You know you’ll be tested but that’s what you want; you want to be challenged as players and as a team, so we’re certain to get that and we aim to rise to it.”
Youngs, meanwhile, has domestic matters on his mind and is relishing next week’s Premiership play-off semi-final trip to Saracens.
Tigers have had no joy on the Allianz Park plastic, having lost all three previous matches there by a combined points tally of 97-22.
Youngs hopes Saturday will be different, though, explaining: “The way we’ve developed under Mauge means we’re playing some great rugby and we’ve learned lessons from our Champions Cup semi-final defeat to Racing.
“We didn’t really control the ball that day and we were edgy. From that we were sloppy and we conceded 28 turnovers, so we’ve got to go down there and be really accurate and focus on imposing our game plan on them.
“Saracens are the most well-drilled side in terms of everyone knowing their role and we know the threats of Owen Farrell, Maro Itoje, George Kruis and Billy Vunipola, but the fast track will suit us and we’ll throw everything at it.”
Youngs has been involved in four Premiership winning teams since featuring in the 2007 crushing of Gloucester.
A fifth would be sweeter given the high the city is currently experiencing after Leicester City’s footballing success.
Youngs added: “There’s a real buzz around the place. Their season folds up after playing Chelsea today so, hopefully, from tomorrow all the focus will be on us and it would be brilliant for the whole city if we could double-up.”
NEALE HARVEY