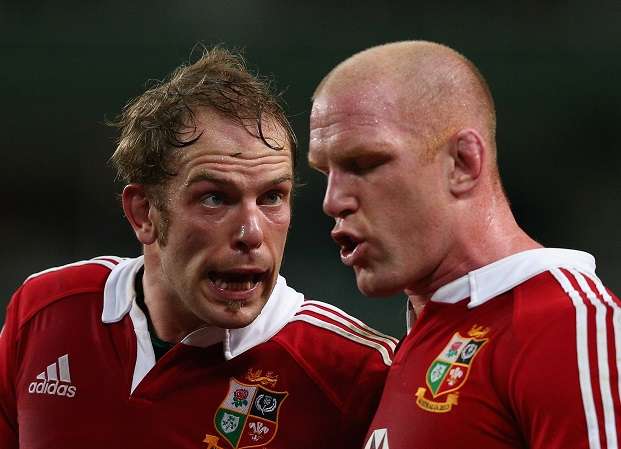 Alun Wyn Jones celebrates a decade in the Six Nations but admits he will miss locking horns with his Ireland nemesis Paul O’Connell.
Lock Jones was the longest-serving Championship campaigner in the Wales team that started at the Aviva Stadium on Sunday.
Only Gethin Jenkins has lasted longer for Wales but started on the bench in Dublin. Jamie Roberts has played one more Six Nations tie though did not make his debut until a year after Jones.
In the previous nine years, Jones has experienced it all, from sharing a wooden spoon in his first campaign in 2007 to Triple Crowns, titles and Grand Slams under Warren Gatland.
Throughout it all has been the constant struggle with O’Connell, competitors each week for Munster and Ospreys, team-mates with the British Lions, fierce rivals for their countries come the Championship.
It was a rivalry that has pushed both players but O’Connell’s retirement is just one of many changes in the Ireland side.
“The Six Nations will be really interesting. There has been a lot of change, some new captains and some teams might feel they are struggling in certain areas because of injuries,” said Jones.
“A few of Ireland’s players have retired and their playing dynamic will change. Ultimately, Dublin is a difficult place to play there no matter who they have.
“We have experienced it a few times. It is the sum of their parts with Ireland. There will be no Paul O’Connell and I sometimes think about that.
“I wish him all the best in his recovery and I will probably miss him on the park, winning line-outs and stuff. We got to know each other very well as team-mates with the Lions and opponents for our clubs and countries.
“I will miss locking horns with him and that competition between us as we both try to win. You cannot shy away from how effective the guy was in his position.”
MATT LLOYD