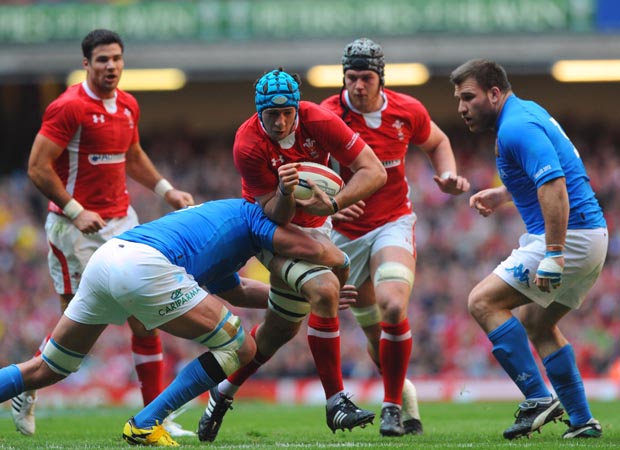 By PETER JACKSON
English clubs are lining up “massive” bids to land four Welsh stars in time for next season.
Leicester are preparing a move for Liam Williams, Northampton are pursuing Jake Ball and Bath are understood to be confident about signing another Scarlet, Rhys Priestland.
The fourth Welsh transfer magnet, Ospreys flanker Justin Tipuric, is wanted by more than one Aviva Premiership club, Leicester believed to be heading the queue.
Surprisingly, Wales have not offered their Lion a dual contract – all the more so given that he will be a free agent at the end of the season.
Head coach Warren Gatland has presented dual contracts to four Ospreys – Danny Lydiate, as revealed by The Rugby Paper last week, Alun-Wyn Jones, Dan Biggar and Rhys Webb.
Liam Williams, an electrifying presence during the autumn series when picked, was one of the top ten players on the WRU’s original dual-contract list as drawn up by Gatland in mid-July. The confidential list, published by The Rugby Paper in August listed the players in “priority recruitment order”.
Williams then was in tenth place, behind Sam Warburton, Alun-Wyn Jones, Talupe Faletau, Gareth Anscombe, Alex Cuthbert, Ken Owens, Dan Biggar, Gethin Jenkins and Scott Williams.
That list has changed with Jenkins dropping out at 34, but Leicester’s move leaves Williams with a big decision.  The Tigers see him making as big an impact as his namesake and former Scarlet team-mate, Owen Williams.
Now that the English elite have the financial muscle provided by an enhanced domestic television deal, the WRU face the embarrassment of losing some of their best home-grown talent.     According to one source, Tipuric and Ball have been made “massive offers”.
Gatland’s decision to give Lydiate a dual contract would appear to be at Tipuric’s expense.  No offer from the WRU will have left the 25-year-old specialist openside thinking hard about whether his future is still in Wales.
He has been permitted only one start for Wales all year, against Fiji and spent the rest of his time on the bench as a substitute for Lydiate. The Ospreys have offered him a new deal in the fervent hope they can keep him.
The Welsh regions are at a considerable financial disadvantage when it comes to keeping their best young players out of English and French clutches.
Leicester see Williams as their full-back successor to Mathew Tait, the former England wing who is expected to be playing for Bayonne next season in succession to the current France No.15, the Montpellier-bound Scott Spedding.
Losing Williams, a 23-year-old in the process of making a name for himself as a Test player, would be a demoralising blow for the WRU dual contract scheme based on an annual investment of £3.2m.  Gatland has already found that it is not enough to guarantee that the best of those still left in Wales, stay there.