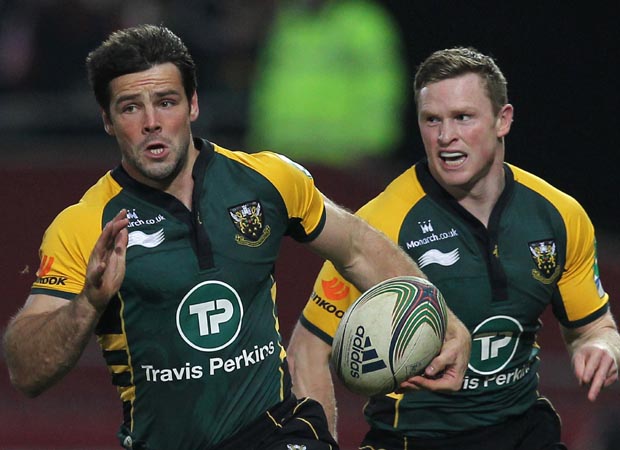 Northampton full-back Ben Foden admits he misses his pal Chris Ashton – and is thrilled at the prospect of a reunion on England duty next month.
Foden and Ashton used be inseparable for Saints and England during four heady years in which they developed a telepathic under-
standing on and off the field.
But since Ashton crossed to the ‘dark side’ and joined Saracens in 2012, Foden has found the going tougher, with injuries and Mike Brown’s emergence combining to restrict the Chester-born flyer to four international appearances in two years.
Foden, 28, told The Rugby Paper: “I think we both miss each other a bit and I did work very well with Ashy. He knew my game inside out and we grew up in the four years we spent at Northampton and being on the international scene together.
“We learned each other’s running lines and his support play was so crucial for his game and my counter-attacking. Since he left we’ve both had to work on our games in different areas, but he’s at the forefront again now and doing what he does best.
“It’s not been an ideal couple of years for me since Ashy left. I’ve struggled with injuries – first my right ankle, then right knee – and that does affect your confidence when you rely on a spring in your step and the ability to explode through tackles.
“But I’ve started to run my form a little hotter now and I’m getting over my knee injury. Things like that tend to last through the season but I feel back to my best and I’m match-fit as well, so I’m really confident going into this last part of the season.
“Hopefully, I’ve given the England selectors something to think about and I’d love to get on tour and see if Ashy and I can still do what we did.”
Foden accepts his opportunities will be limited by Mike Brown’s fabulous form, adding: “Browny’s been superb. I played with him all the way through England U21s and the Saxons and he broke into the England team before me, but ran into trouble.
“But his attitude has been fantastic and he’s spoken to the coaches about what they’re looking for from a full-back, worked at his running game and speed and now has that ability to beat the first man, which is so important in rugby at the moment.
“Browny’s deceptively strong in making and breaking tackles and you can’t argue with his form. He’s definitely one of the best full-backs in the world at the moment and when you watch someone running as hot as he is, all you can do is applaud.
“At the same time, though, you have to keeping putting the pressure on. There will be chances and there’s 16 months until the World Cup, so a lot can happen and if you work hard and raise your own game, you’d hope opportunities will come.”
Foden and Ashton have a hot date in Cardiff next weekend, where the former will compete in Friday’s Amlin Challenge Cup final against Bath before the latter takes centre stage for Saracens in their Heineken Cup showdown with Toulon.
“It’s great to see Ashy doing well and I’ll wish him all the best,” Foden said. “We’d love to be involved in the bigger, better tournaments as well, but we’re in the Amlin and hopefully we can go on and grab some silverware.
“The England selectors are watching and it’ll be my last chance to impress before the squads are announced.”
NEALE HARVEY