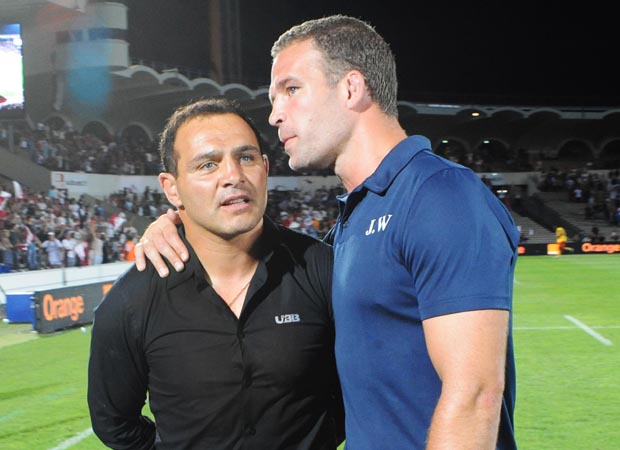 Joe Worsley had an expertise in rocking opposing teams which is unsurpassed in pro rugby. Worsley was the chop-tackler par excellence, the Wasps and 78-cap England flanker whose ankle-high felling of the opposition, cutting a chainsaw-like swathe, changed the course of games.

The big, rangy destroyer whose superb technique disrupted their rhythm and left the best laid plans in tatters.

Yet, Worsley, now ensconced as the defence coach at Bordeaux-Begles, where his old Wasps team-mate Raphael Ibanez is director of rugby, experienced a surge of conflicting emotions this week at the unfolding events at the two clubs he holds dearest.

No sooner had Bordeaux-Begles blasted apart the pecking order in the Top 14 by putting six tries past unbeaten Clermont in a 51-21 victory at the Stade Chaban Delmas in front of 26,000 ecstatic supporters, than Worsley heard that Wasps were being uprooted from London to Coventry.

Having been at Bordeaux-Begles for two years Worsley sees this as a reflection of different rugby cultures as he compares the Wasps experience with his new home on France’s Atlantic coast.

“I understand both sides of the argument at Wasps. The fans must be annoyed, but the flip side is that if you want to build something you have to have a stadium. When we separated from Chris Wright at QPR and then went to Adams Park I believe that Steve Hayes genuinely thought that it would happen with the new stadium plan at Wycombe.”

He adds: “Saracens, with much more resources than Wasps, had people on that Allianz Park project full-time for years. It is very hard to find somewhere to build anything in London, let alone a stadium. For Wasps it is now about building a new fan base and working with a new rugby community. They have to build a pyramid, and it must involve keeping hold of the best young talent in Coventry – which has produced a lot of good players – and in West London too.”

Worsley says there is a completely different dynamic at Bordeaux-Begles, and highlights the different attitude of local and municipal government to sporting facilities in France. 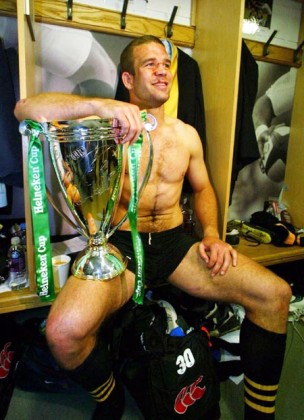 “Our average gate is 26,000, and we are the best attended side in the Top 14. When there’s no more beach, and the summer fun is over, they flock in. We are being given the 34,000 capacity Chaban Delmas stadium next year free of charge by the city council because the football club is moving, whereas in Britain the whole process of pro sport is slowed down by stadium issues.”

He explains how the Bordeaux-Begles model works. “It’s astounding how far this team has come given that the two clubs that form it, Stade Bordelais and Begles, only joined together in 2006. They won promotion two seasons before I arrived, and the only way you can describe the different traditions is that it would be like amalgamating Harlequins and Gloucester.”

He continues, “The main backers are the Moga family, and the club president Laurent Marti, who made his money in textiles, has done a huge amount as a backer in making sure the club now breaks even. Marti is an astute businessman, and after what happened at Wasps I know how important it is to have something stable. You need roots, and without a stadium it’s not easy to make the most of a very famous marketable name.”

Worsley says that he has enjoyed the experience of putting down new roots of his own in Bordeaux. “When Rafa (Ibanez) began at Bordeaux-Begles he knew I was out on a limb after having an operation on my neck, and thinking about my future, and we always talked about coaching when we were at Wasps. Also, as a family we’d always wanted to live abroad and experience a different culture.”

He adds: “I miss London – I love it – I’m from there. It’s an amazing place because there is so much to do, whether its exhibitions, music or the theatre. But Bordeaux is very special too. It is a great town, and I’ll do my bit for the Bordeaux tourist board any time they want. It’s close to the beach and the Arcachon basin, it’s only three hours from the skiing in the Pyrenees, and is next door to the Saint Emilion wine region.”

However, while the beauty and richness of the Bordeaux area takes care of the pastoral side of things, what about the business of a new career as a coach?

Worsley answers: “I’d aimed to get involved in coaching slowly, but necessity is a good way of learning – and I’ve learned very quickly.”

He adds: “I didn’t speak much French but after six or eight months I could get by, and now I can have a good conversation. As a coach I work hardest at keeping everything going rather than focusing on one area and letting others slip. It’s like trying to keep hold of a number of rocks when you’re at the top of a slope. You let each of them roll a little way down, and rescue them, but don’t let any roll all the way down the hill.”

Worsley fleshes out his coaching outlook. “I’ve brought in stuff that I learned from Wasps, England and the Lions, as has Rafa with the breadth of his experience in club rugby and captaining France. At the same time as giving the players little elements of everything, you have to be careful not to overload them. Here we focus on the individual, and improving specific areas. This was something that didn’t happen to me a lot during my career. Even at Wasps individual improvement was more organic, because the guys were very motivated, rather than the result of structured planning.”

Worsley says that it is interesting the way that coaching ideas are adopted by different teams at different times. “I remember  Wasps played Stade Francais in Europe and we smashed them with the blitz defence when Fabien Galthie was their coach. However, whereas Wasps changed their defensive system, Montpellier – coached by Galthie – now have their own version of the blitz.” 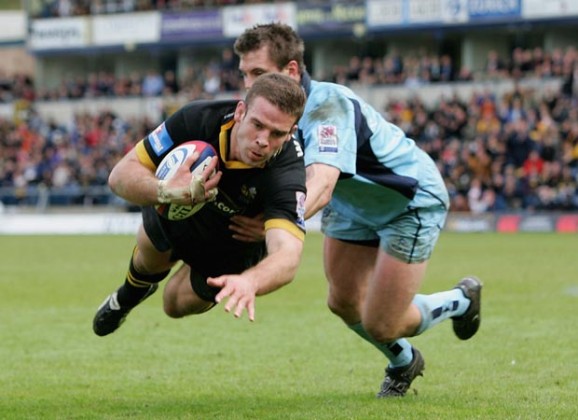 Joe Worsley dives over to score against Worcester

Worsley says that the Top 14, with its massive squads and man-mountain teams, is a monster of a league.

“The game here is slower than in the Premiership with the ball often in play for only 30 minutes. It’s about big strong men – more old school. However, there are also a number of teams who can play a faster brand, and last season Toulon switched from slow to fast (to win the double).”

Worsley explains that last season Bordeaux-Begles  nearly qualified in the top six, but that this season being in the second tier European Challenge Cup is no disaster. “We know that to play in the Top 14 and Europe requires a very large squad. The game here may be slower but the level of contact is huge – and without big squads the blokes would just fall apart. If you are playing in it you must have a big squad because with 20 teams in the Europeans Champions Cup every game is going to be a tear-up.”

Worsley says, “Bordeaux-Begles have got a lot of young talent. For instance, we’ve got two full-backs, Romain Lonca and Sofiane Gitoune, who will play for France. We are very ambitious in terms of how we play – and we always play rugby. The win over Clermont was probably our biggest against a marquee club, although we did beat Toulon 42-0 two years ago.”

He adds: “Toulon were not good that day, whereas, looking through the tape, Clermont played very well against us at times. Defence and contact are my main areas, but more and more I realise how important it is to work with our experienced attack coach, Vincent Etcheto, especially in counter-attack.”

Judging by Bordeaux-Begles rapier-like thrusts from Clermont turnovers the team from France’s sixth city are the coming force in the league. However, while Worsley is delighted to be part of that progress he says that the Top 14, and France at international level, have serious issues to overcome.

One of the biggest is perceived to be the number of overseas players in the Top 14, and its detrimental effects on the national team. Worsley does not buy into that argument.

“There are loads of good French players and having foreigners here isn’t the big problem. They’ve got the talent, but they’ve also got major handicaps. The biggest one is that they are knackered. Their players start in mid-August and play all year. As a top pro that simply doesn’t work, and mentally you’re ruined. The problem is that the top French players are being flogged.” 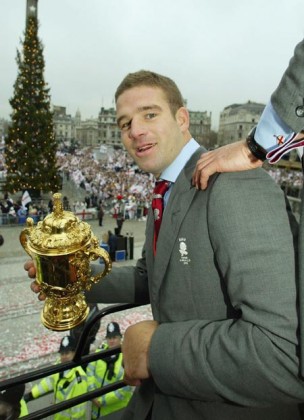 Worsley says it is why he will not be backing France to win the 2015 World Cup: “They are capable of winning big games, for sure, but not winning enough of them in a row.”

He says player release could also become a flashpoint in the build-up to the tournament. “The French league has been very good at helping players from other nations to develop, with Georgia a prime example, but the only worry is that some of the poorer nations might have problems with player release from clubs.”

By comparison, Worsley believes that England – despite the shockwaves at Premiership level surrounding Wasps – are in a stronger position than France. As a veteran of three World Cup campaigns in 1999, 2003 and 2007, he likes what he sees and says that Stuart Lancaster and his coaches should press on with their high-speed approach.

“It’s very exciting, and with phenomenal talent coming through from all backgrounds it’s great to see. It’s the pay-off from 2003. England appear to have a real identity and to have developed as an attacking side. After the New Zealand tour people were bemoaning England playing too much rugby – but you have to do it. You have to be confident and stick with it. It’s about becoming more efficient with the ball, and then turnovers won’t hurt you to the same extent.”

He adds: “Forward play has always been a strength, but England must keep going down that route (of running rugby). We couldn’t win a World Cup playing now like we did in 2003, you have to develop that new attacking game. Teams have to evolve, because everyone else is.”

When it comes to evolution Joe Worsley knows the territory. How else could he have made the transformation from chainsaw tackler to one of the creative forces behind the impressive Bordeaux-Begles break-out?