Posted on 10th April 2020 by admin in Brendan Gallagher, Columnists 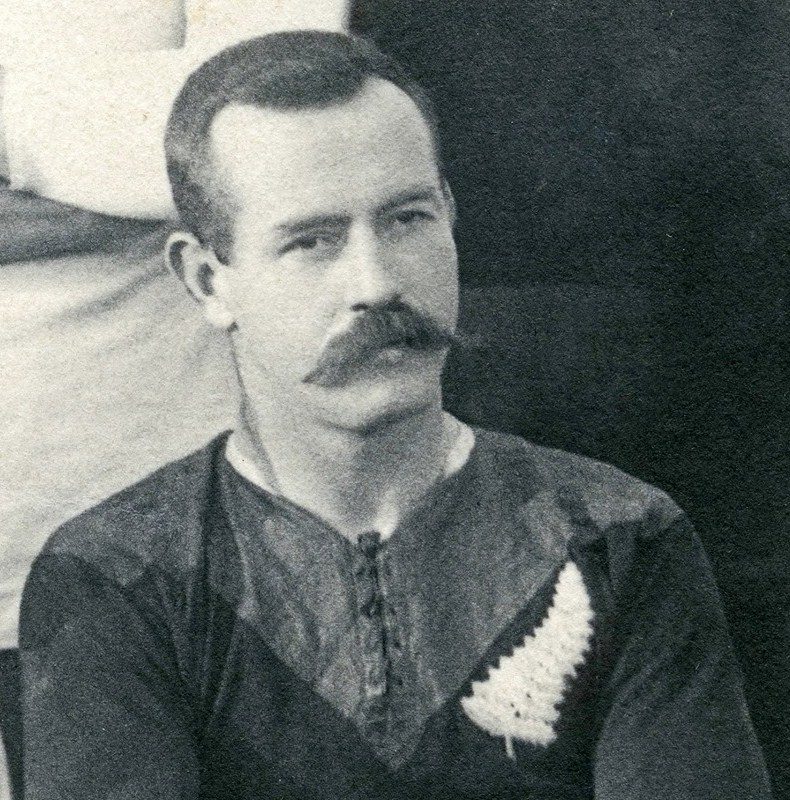 It’s more than a little ironic that the All Blacks – famed for their teamwork, devotion to the jersey, comradeship and projection of all that is good in New Zealand – were founded only after a failed mutiny in the Southern Ocean.

The trail-blazing 1905-6 tour to Britain was a massively ambitious, expensive and prestigious project but initially there was seething disquiet within the squad. In the ‘final trial’ for selection the North Island had caused a massive shock by hammering the much-fancied South Island team 28-0 which caused a hurried rethink and late influx of North Island players into the tour squad.

That included Dave Gallaher, a rugged, no nonsense Army man originally from Ramelton in Donegal, who hadn’t been among those originally sounded out for the eight-month tour back in January. Now, not only did he hurriedly answer the call to arms, he found himself installed as the captain of the tour party.

Despite smiles for the Press and well-wishers as they left, tensions were running high and there was insurrection afoot on the SS Rimutaka as tour manager George Dixon recorded in his dairy:

“Eight days into the voyage a crisis arose when Gallaher announced at a team meeting that he was resigning the team captaincy immediately. Gallaher said that it had become apparent following the team’s departure from Auckland that the players wished to appoint their own captain.”

A motion was put forward that ‘this meeting heartily endorses the appointments made by the New Zealand management committee’ and was carried 29-17.

Despite 12 malcontents publicly showing their lack of confidence in their skipper and others chuntering in the background Gallaher had carried the day by calling their bluff, a classic pre-emptive strike. Much emboldened the Army captain and Boer War veteran then cracked the whip like never before.

Every day would start with a workout at 7.45am followed by a short break for breakfast before running, sprinting and agility training on deck from 8.45 to 10am. Then came scrummaging practice for the forwards, skills for the backs, and there would be another similar session at 3pm every other day.

Most afternoons were spent in the ship’s well-appointed gym where boxing was the main occupation along with Sandow developers – a collection of barbells pioneered by the renowned German bodybuilder Eugene Sandow. By the time they reached Plymouth, New Zealand were in prime shape. An early example of train hard, play easy.

At team meetings in the saloon bar every night he rammed home the message – how could a small nation like New Zealand hope to compete against the motherland if they were bickering and fighting among themselves? Hard training, discipline, efficiency, courage and teamwork.

Gallaher demanded everything from his men that he had already displayed himself in the guerrilla warfare exchanges on the High Veldt. The New Zealand modus operandi was in place and has never changed.

Gallaher employed science and strategy as well. Along with vice-captain JW Stead and Billy Wallace, another trusted lieutenant, they put into place what we would readily recognise these days as a gameplan. Hookers were to throw the ball in at the line-out which was an innovation and the forwards arriving for a scrum would take up predetermined positions rather than the ‘first up first down’ method that were the norm.

There were to be well-drilled set-piece plays and calls in the backs and most radical of all, Gallaher himself redefined the art of back row play by standing off and breaking from the scrum and getting among the opposition scrimmage to prevent release.

The British Press christened him the ‘Rover’ – rugby’s first sighting of the modern-day flanker.

New Zealand started with a huge 55-4 win at the Exeter County ground against Devon who were a power in the land and who were to easily win the County Championship later that season.

The local Exeter Express and Echo immediately dubbed New Zealand the All Blacks on account of their striking all-black kit which, alas, rather discounts the more romantic notion put forward by Wallace when he wrote home.

Wallace claimed the nickname came from a report in a London paper a few weeks later that insisted New Zealand played as if they were all backs and a sub had changed it to All Blacks.

Gallaher’s All Blacks won 34 of their 35 games on tour with their solitary loss that epic Test against Wales. In total they scored 976 points and conceded just 59.

Gallaher played in 26 of those games and missed just one of the five Tests, being injured for the game against Ireland in Dublin. Although his team were much praised and feted for their sensational brand of rugby, his abrasive style, controversial Rover role and rather taciturn personality, ensured that Gallaher himself received a good deal of criticism.

As the tour wound up, Gallaher and Stead used the voyage home to write The Complete Rugby Footballer, a 300-page master class in rugby and a highly prized collector’s item these days.

The inaugural Wallabies visit of 1908-9 was less touted, expectations were modest, yet they proved to be excellent tourists, playing 39 matches over seven months – including matches in Canada and USA on their way back – winning 33 of the games including a comfortable Test victory over England at Blackheath. In their only other Test they lost 9-6 to the outstanding Wales side of that era.

They also took the Olympic title although Olympic challenge would be a more appropriate term with the only opposition that could be mustered were the County Champions Cornwall.

Australia won 32-3 at White City on a pitch marked out alongside the massive outdoor swimming tank, as a swimming pool was then called.