Home / Features / Columnists / Guscott column: Dean Richards is still my man to take over from Eddie

Guscott column: Dean Richards is still my man to take over from Eddie 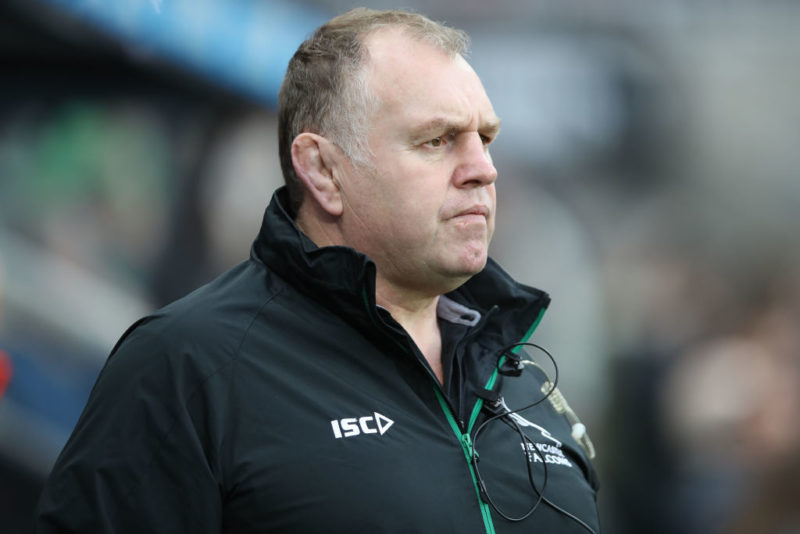 VERY few countries in the international game appear to have succession planning in place when it comes to coaches – and I have said before that I do not subscribe to the concept.

For instance, Eddie Jones now has an England coaching team which includes John Mitchell, Steve Borthwick, Scott Wisemantel and Neal Hatley. The likelihood of the last three of them taking over is minimal – although Mitchell has done the job before with the All Blacks, and could do so again at international level.

However, is Mitchell part of the RFU’s succession plan? I ask the question because the initial impression given was that the RFU wanted to nurture an English coach to take over from Jones.

In any case, this week, the RFU’s acting CEO, Nigel Melville, said that Jones is contracted until 2021 under the agreement drawn up by his predecessor, Steve Brown, and that it is in place subject to any release clauses that have been negotiated.

I guess whether Jones continues for part or all of the two-year extension will ultimately be down to those clauses, as well as the RFU’s newly appointed chief executive, Bill Sweeney, when he takes over this summer.

We have heard about Warren Gatland replacing Jones, and Steve Hansen has also been mentioned, but that sounds to me more like straightforward recruitment than succession planning, which is about nurturing a coach from your own ranks.

In the business world lots of companies go out and recruit a new CEO when there is a vacancy. If that occurs because the business has gone poorly and the CEO has been sacked, then generally someone from inside takes over as interim CEO – and if that goes well, they are appointed.

The same happens with international coaches. It was the case when Stuart Lancaster was promoted from within to be appointed England coach by the RFU, and now the same is true of Ole Gunnar Solskjaer at Manchester United.

It is also the case with Andy Farrell being lined-up to take over the Ireland head coach role from Joe Schmidt after the World Cup. Schmidt would have had a huge say in who took over from him, and Farrell has done well to be promoted from defence coach to head coach while he is still in his early 40s.

Shaun Edwards is another candidate for a top job, but does he want to make the step from being one of the best defence coaches in the world with Wales, to running the whole show? In the end, it depends on your level of ambition.

During Lancaster’s time as England head coach, Farrell was very hands-on. With his authority and personality, Farrell has head coach written all over him, whereas I’m not sure Edwards has the same personality.

That said, there are all sorts of personalities among the head coaches in the Six Nations, especially when you compare Gatland, Jones, Schmidt, Gregor Townsend, Conor O’Shea and Jacques Brunel.

If England were to win the 2019 World Cup it would be a very difficult decision for Jones to just walk away. Clive Woodward found it hard to do so in 2003, and he stayed on until it all went up in smoke in 2004.

Woodward came into an archaic system but he had really good players, and he had plans to continue it. However, he got frustrated because the RFU did not have control of the biggest asset, which is the players – and that has remained a problem that still exists today.

It is too difficult to build a sustainable relationship between country and clubs when you have two entities that want different outcomes. At times there does not seem to be a lot of collaboration between them – so a resource which should be an unbeatable combination often does not work.

That is why you have a state of affairs where the two most successful club coaches in the country, Mark McCall of Saracens and Rob Baxter of Exeter, have said publicly that they do not want the England coaching job when Jones steps away.

McCall has really got nothing more left to win in club rugby, yet he knows that coaching England is almost an impossible job compared to the task facing the likes of Gatland, Schmidt and Townsend, who have control of their players thanks to central contracts.

England are one of the biggest, wealthiest unions in the world, and they have one of the most financially powerful leagues – and yet they cannot get it together. Baxter and McCall effectively enjoy a level of  control at their clubs that they would not have at international level.

Yes, the England job is very well paid, but there is also so much downtime in a season where you cannot put your plans into practice – and then all of a sudden there are eight million people watching you on TV, and 80,000 watching you live, and the pressure and exposure is off the charts.

If either McCall or Baxter were to make themselves available for the England job, my money would be on McCall, because of what the Northern Irishman has achieved already. My instinct is that McCall would want it on his own terms – with his own coaching team imported in full – because only an inexperienced coach would take the England job with anything less. They have to be able to change anything that they want.

The best fit for the next England coach is someone who understands the English club-country scene. McCall and Baxter are immersed in it, and Gatland knows it from his time with Wasps. I would also not overlook Dean Richards, who I still believe is the best qualified coach for the job, and would be my man even now.

There is a rumour of a Dean Ryan/Jim Mallinder ticket for the England job, which I don’t really understand. They are both currently employed by the RFU, but it would be the wrong choice simply because neither of them have won enough at club level to justify it. Jim has won one Premiership title with Northampton, but otherwise where is the CV which makes that appointment work?

So, Richards and McCall would be top of my list, with Gatland very close them – but they have to understand the challenges of English domestic rugby, and recently Warren has been very used to being able to rest the Welsh players when he wants to.

Set against that, Gatland’s record with the Lions and Wales has proved that he can go anywhere and have the right effect. However, even he could struggle with becoming coach of France. If England is a hard challenge, then the challenge in France – if Gatland is serious about it – is huge.

Just imagine the politics, especially if you don’t speak the language. It would be like Gatland being in one of those, “I’m a celebrity, get me out of here” challenges where you have to put your hand down a hole without knowing what’s in there.

As for the England job, it would be best for someone to do it on their own terms – and it would be best if they are not doing it for the money, because then they are wealthy enough already not to have to worry. The problem is there are not many of those around.