Home / Features / Columnists / Cain column: How did a £91m sink hole open up to swallow RFU?

Cain column: How did a £91m sink hole open up to swallow RFU? 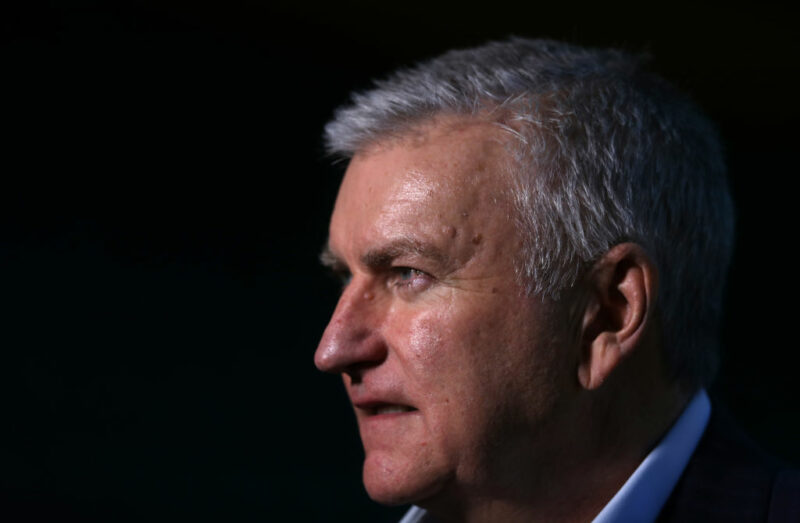 HOW is it that the RFU, which has had the enviable reputation almost since its inception of being the wealthiest union in the world game, has gone cap-in-hand to the British government begging for a bail-out?

According to Bill Sweeney, the RFU’s under-siege chief executive, who has responsibility for the well-being of the sport in England, it must have state support, because it is in danger of being wrecked on the Covid rocks.

After being told by government that the game could be without supporters coming through the turnstiles for a further six months due to the pandemic, Sweeney was reduced to begging Boris Johnson – or at least, his quasi-sports minister, Oliver Dowden – for help.

Sweeney said that without fans the RFU would see a loss in income from the Autumn internationals of £46 million, and a further loss of £60 million from the Six Nations, resulting in a cumulative loss of £106 million.

However, if Sweeney had done his homework, he would have felt acutely embarrassed by the way the RFU has squandered its once impressive financial reserves, when he went to Dowden to plead for a rescue package.

Sweeney said: “Without support we are in danger of clubs at the heart of communities across England, as well as players and volunteers, disappearing forever.”

He added: “Sport is vital for people’s physical and mental health, both of which have never been as critical as they are now.”

Those statements smack of desperation, but they are accurate. What is also accurate is that the RFU must be held to account for the tragic financial management which has led it to have to go on bended knee to the government for aid when it should have had the reserves to support itself – at least in significant part – during this period of hardship for Rugby Union in all its forms across the land.

The reality is that between 2005 and 2008, the RFU had an establishedset of financial ‘Golden Rules’ which were written into its strategic plan, with the primary aim of creating a multi-million pound reserve as a buffer against unforeseen crises such as pandemics, wars, civil strife, or natural catastrophes.

This reserve was, and is, common practice among big, prudent organisations – including those in sport like World Rugby/IRB, which holds reserves needed to cover the loss of income in case a World Cup tournament has to be cancelled.

The application of the Golden Rules fiscal policy meant that by 2011 the RFU’s reserves had grown to £62 million – with a projection they would have reached £67 million by 2019 if the financial rules of banking £2.5 million in every four-year cycle had remained in place.

This would have offset much of the £106 million loss of income the RFU predicts it now faces.

What is staggering is that instead, by 2019, the RFU reserves were minus £24 million, representing a total reduction in its audited reserves in the eight years from 2011 to 2019 of £91 million.

What makes this £91 million obliteration of the Twickenham reserves even more mind-boggling is that it was so deep in the red despite a £30 million RFU profit from hosting the 2015 World Cup.

This was meant to have been ring-fenced specifically for the community/amateur game in England. It goes without saying that if some of that profit had been held in reserve by the RFU, the current parlous state of most community clubs could have been ameliorated.

While Sweeney received this hospital pass when he took over as RFU chief executive last year – and reacted by slashing funding to the Championship clubs – the responsibility for the grim state of the RFU’s finances rests with his two predecessors, Ian Ritchie and Steven Brown.

It also falls within the remit of the current RFU board chairman, Andrew Cosslett, and his predecessor, Bill Beaumont.

When Ritchie, who was chief executive from 2012 to 2017, decided to leave Twickenham, he was said to be on a £700,000 yearly salary – but unfortunately the inflationary trend at the RFU on his watch was of a far greater magnitude than that. In fact, it has emerged since that his spending spree was not just in excess of what the game in England could afford, but has left the RFU in dire financial straits.

Ritchie and Brown, who was his chief financial officer, appear to have abandoned the Golden Rules guidelines. These included undertakings to ensure that the RFU was profitable in each financial cycle, as well as a 50-50 investment split between professional and amateur sectors, and a stipulation that RFU operating costs were within a ceiling of 80 per cent of revenue, and payroll costs within a ceiling of 50 per cent.

In October 2017, by which time Brown was embroiled in a rocky stint as chief executive having succeeded Ritchie, it had become apparent that there was a sink-hole in the RFU’s reserves.

This was because the Professional Game Agreement (PGA), which was negotiated and signed off by Ritchie in July 2016, committed the RFU to paying the Premiership clubs a crippling £220 million over eight years, mainly for the rights to England player release.

That Ritchie had overspent massively on the PGA was made crystal clear the following year when venture capitalists CVC bought a 27 per cent share of the entire Premiership Rugby operation for £275 million.

After the PGA debacle led to Brown having to make swingeing staff redundancies at Twickenham in a desperate attempt to cut costs, he decided to leave the building in late 2018 – although the RFU books revealed later that he had been given a £300,000 payoff.

Ritchie had meanwhile been appointed as chairman of Premiership Rugby – the same organisation he had been negotiating with as chief executive of the RFU. Extraordinarily, he made the move without any challenge about a conflict-of-interests from his former employer.

The question that has to be answered by Cosslett and Beaumont is how this desperate financial situation either escaped the scrutiny of the RFU board, or what persuaded them to not only approve Ritchie’s PGA plan, but also the concurrent massive £30 million overspend on the East Stand refurbishment at Twickenham.

Cosslett might also explain how the RFU accounts show an overspend of almost £1 million (£900k) in the England team budget for the South Africa tour in 2018, which is almost the budget for an entire tour in itself.

Cosslett has been RFU board chairman since 2016, when he took over from Beaumont (2012-2016), and he was an independent non-executive director on the RFU board from 2012.

In the RFU’s own governance and integrity statement in its 2019 Annual Report, it states: “The depth and diversity of experience of members of the Board and executive team, particularly the experience of independent non-executive directors, means that there is a high level of experienced scrutiny and oversight of the biggest decisions made by the RFU.”

That claim is utterly contradicted by the £91 million sink-hole decisions that have swallowed the RFU’s entire reserves.