Home / Features / Columnists / Guscott column: Is there a role for Scott Robertson with the Lions?

Guscott column: Is there a role for Scott Robertson with the Lions?

Posted on 9th September 2020 by admin in Columnists, Features, Jeremy Guscott with 0 Comments 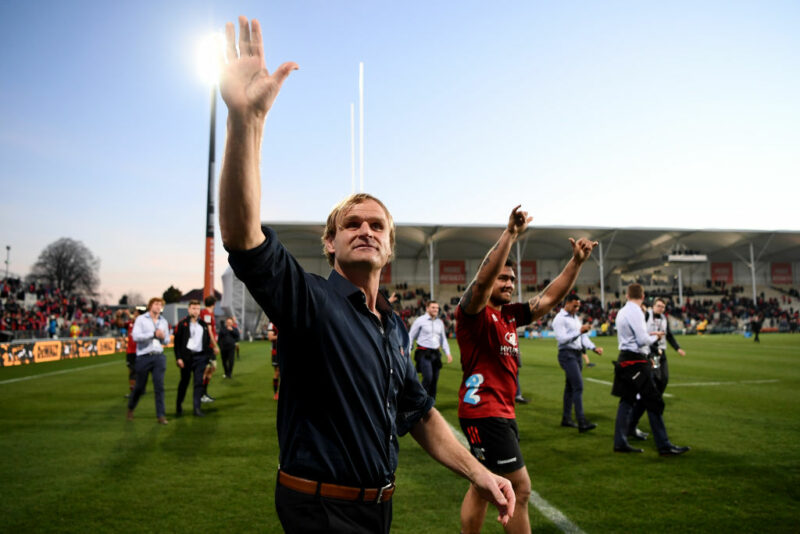 IN today’s game it doesn’t matter where the Lions coaches come from but I’d be surprised if there wasn’t a large contingent of Home Union coaches on Warren Gatland’s staff next summer.

Going back to South Africa will be a huge challenge to play the world champions and he needs the best coaches available. Some of them might not be available, like Shaun Edwards, who said recently that France was his sole focus, but Gatland must put the emphasis on continuity.

Crusaders coach Scott Robertson has made his desire to be part of that set-up public after another Super Rugby triumph in New Zealand, but it would be a left-field choice if Gatland were to choose him as a specialist coach – in charge of attack, defence or the forwards.

Experience both in the playing squad and coaching panel is a must because you are playing catch-up from the start with so little preparation time and such an intense schedule once you arrive – plus Robertson just doesn’t know the Lions players well enough.

Gatland’s known for a long time that he’s going to be head coach and with everything being normal he would be here watching the season restart and the Autumn Internationals, planning his coaching team and likely drawing on what he’s had before – the likes of Graham Rowntree, Steve Borthwick, Andy Farrell, Edwards, Rob Howley and Neil Jenkins.

Stephen Jones, now Wales attack coach should also be in the mix, as well as Gregor Townsend, who we understand declined the offer in 2017 to focus on his new job as Scotland head coach. There is a chance this time that Farrell might feel he is in that position now having just taken the top Ireland job.

The Lions definitely need characters in the coaching staff and Robertson seems like a massive character. You see him breakdancing when Crusaders have won the championship and it seems he is hugely respected and well-liked by his players, coaching team and supporters.

Robertson is a proven winner and I don’t think the players would be fazed if he is selected by Gatland, although the other British and Irish coaches who miss out would be a bit peeved in the same way as some players are resentful when a player who qualifies for Test rugby through residential grounds is chosen ahead of them.

But if a player misses out they know they have to work harder and improve to get in next time and it’s similar for coaches.

Rob Baxter would not be an outrageous choice for the trip. He’s certainly made an impact with Exeter but the question mark is, can he do it quickly? While he has international players in his squad he’s not been an international coach. That may not be a necessity but I do know it helps.

When you think of those periods of intense rugby that you run as a national head coach – four weekends in the Autumn, the Six Nations and three-week tours – you’re used to that intensity after a lot of planning time. It’s just a different level to the club game where you have the players all the time and that change must take coaches some getting used to.

The Lions is the most intense experience of all. If I sat down with a virgin Lions tourist player and told them what to expect it would only be five per cent of what it actually is. It’s so physically and mentally draining it’s almost impossible to explain.

Plus it all seems pretty laid-back in Robertson’s native New Zealand. While it’s a way of life with huge attention, if you watch an interview with players or coaches it is very relaxed – it’s not often you’ll listen to a strained interview where the reporter is asking hard questions and the interviewee is uncomfortable.

If Robertson is selected by Gatland, it will be interesting in what role. He was a back rower in his playing days – winning 22 caps for the All Blacks – but no Home Union pack plays like a New Zealand pack so coaching the forwards would be almost chalk and cheese. He’s dealt with lots of All Blacks at the Crusaders, and while it is the best of the best in the Lions, the forwards will not possess the skillsets and game understanding of the Kiwis. That would be his big challenge, adjusting to what he has to work with.

Gatland will already have formulated a plan as to how to dismantle the defensive wall and set-piece machine that makes the South Africans but a New Zealand brain isn’t a bad thing to have in reserve. Robertson will know South African rugby inside out as his side have beaten them all in Super Rugby and it would be a huge advantage to have that inside track on the Boks players and team strategies. Ideally you would also want to have the same knowledge about the players from Britain and Ireland.

But coaching is coaching. The difficulties can be language barriers, cultures and skillsets, yet you still want to achieve the same thing. Techniques translate – whether it be how to lift and jump at the lineout, understanding how to attack space or play with smoke and mirrors in the backline – it’s the same game.

It wouldn’t take long for a coach of Robertson’s ability to see the quality of players by watching TV games and a lot of those assumptions will be reinforced otherwise when he sees them live.

As simplistic as the South African game plan is, if they are all fit they will be extremely hard to beat on home soil. If I was Gatland I would try to get as much help and inside knowledge as possible and bring in Robertson as a consultant.

I can see problems if he were to come in a specialist coach as he doesn’t know the players well enough or know what to expect on a tour like that – but giving him a consultancy role on the tour could hand the Lions a secret weapon and be a game changer.