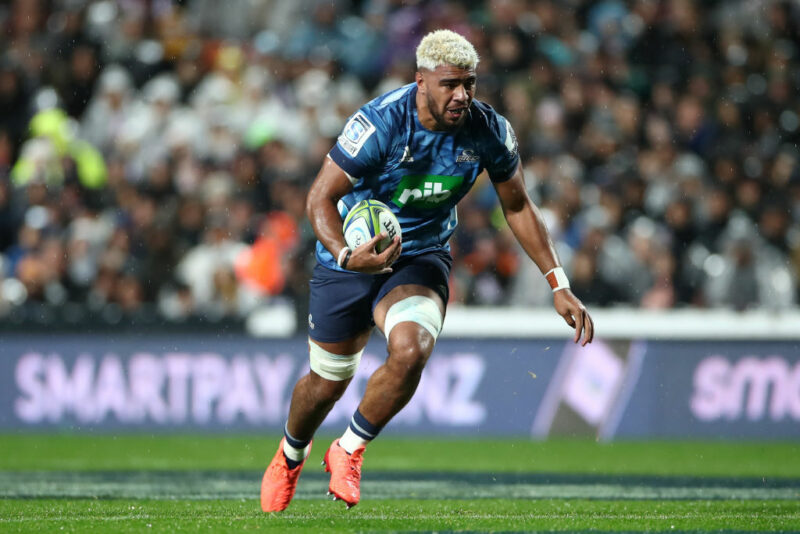 SPECULATION in New Zealand that Eddie Jones is interested in the impressive young Blues No.8, Hoskins Sotutu, is on the money – with the proviso that Sotutu plays club rugby in England.

“He is a talented player, definitely physical, and has got some pace and feel for the game. If he wanted to play club rugby in England, and wanted to play for England, we’d definitely be interested – but it’s him that’s got to want to dance.”

The England head coach has shown a pretty mercenary approach to the recruitment of overseas players so far – and is especially partial to those with a Kiwi or Aussie background – and the statement above indicates that little has changed.

Whether it is via three year residency rules, as with Fijian-born Nathan Hughes and Joe Cokanasiga, as well as Denny Solomona, who played Rugby League for Samoa, or family heritage, as with Brad Shields (English parents), Ben Te’o (English mother), or Willi Heinz (English grandma), Jones has shown that he is prepared to overlook English born and bred players if he thinks he has a better overseas option.

Sotutu’s father is the ex-Fiji and Auckland winger Waisake Sotutu, but the 22-year-old revealed recently that his mother has English heritage, hence the England head coach’s sudden interest in the 6ft 4ins, 16st 9lbs/106kg back row forward.

However, as Sotutu senior mulled over his son’s international options, including the All Blacks, Fiji, and England, he observed that Hoskins was not only New Zealand-born, but “has lived all his life in New Zealand”.

Ultimately, that is the heritage that should count most, because it is where he has been raised, and learned how to play Rugby Union, with Sotutu progressing through the Auckland schools system, before being selected by New Zealand at U18 and U20 levels.

Anyone looking at the first month of Super Rugby Aotearoa can see also that he is a very talented player. Sotutu’s handling skills and speed, evident in the metres he makes from the back of the scrum, have been exceptional.

However, it is only his first season in the big time with the Blues, and although Sotutu has been praised to the rafters, there is nothing that I have seen that makes him a more outstanding prospect than the Harlequins No.8 Alex Dombrandt.

Dombrandt is English qualified, having been born in Surrey, and played rugby from the age of six at Warlingham RFC, before going on to play at John Fisher School and Cardiff Metropolitan University, before signing on at The Stoop.

Pundits in New Zealand and in Britain have been in raptures about Sotutu’s long precision scoring pass off his left hand to put Blues winger Mark Telea over against the Chiefs last month, yet Dombrandt’s inter-passing and backhand offload to put Danny Care over in the Harlequins win over Saracens in January, was even better.

It is interesting that Dombrandt was not part of a Premiership club academy, and nor was he selected for any England representative sides at age group level. It would be a great pity if there were any reservations about the Quins No.8 within the England coaching hierarchy based on his talent not being spotted sooner. Jones should be aware by now that this is a regular shortcoming within the English game.

Encouraging promising home-grown players is an essential part of an England coach’s remit, while, by contrast, bringing overseas imports who have no previous connection with rugby in England – and the same applies to Scotland, Wales, Ireland, France or Italy – can be detrimental to the whole rugby fabric of that country.

The era of the ‘kilted Kiwis’, and to a lesser extent, Aussies, in Scotland from the mid-1990s up to 2010 left many young Scottish players disenchanted with the game. This was because, after working their way through the ranks, they were consistently supplanted by New Zealand imports who had been fast-tracked following determined overseas recruiting drives by Scottish Rugby Union scouts.

Virtually all of those kilted Kiwis – with the notable exception of Sean Lineen – returned to their homeland as soon as their international rugby careers ended, contributing little or nothing to the future well-being of Scottish rugby at schools or amateur level.

Sotutu has been nurtured and coached in the Kiwi system since he started playing and therefore New Zealand is his obvious allegiance, and who he should play for. Dombrandt is his English equivalent, and it would be unjustifiable if Jones, or any other coach, ignored his claims – or those of any other promising English player – for a Kiwi import.

England have enough players of their own not to plunder the stocks of other nations, and, while Jones might see a short-term gain, the RFU should look at the bigger picture and be staunchly opposed to an England coach poaching from overseas.

It is a clear sign of a lack of confidence in your own coaching and player identification systems, and if Jones has reservations about English coaching or player selection, the RFU should ask him what they are, and what measures he would advocate to make the necessary improvements.

If you want evidence of a country that has only ever selected from its own playing ranks – apart from Zimbabwe-born Tendai Mtawarira – it is South Africa. And they are the world champions.