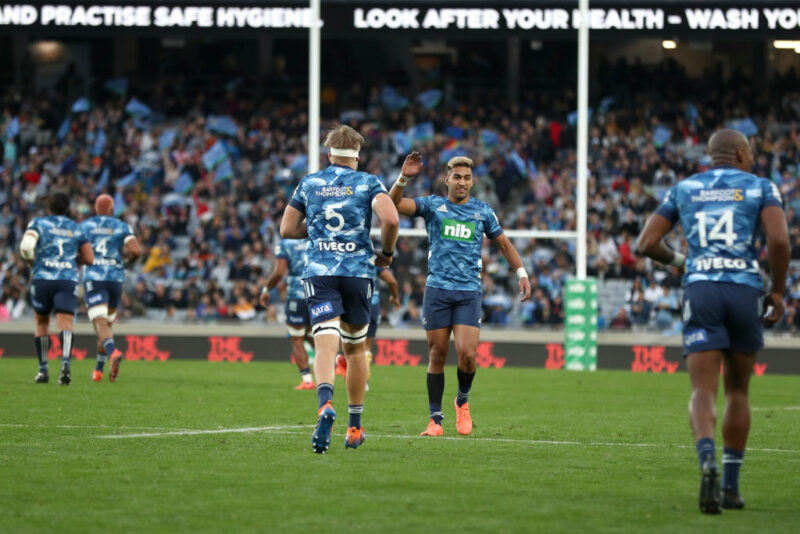 ALL those supporters from the UK and around the world who have tuned into the Super Rugby Aotearoa matches in New Zealand will feel a tinge of jealousy.

The 40,000 crowd at Eden Park, Auckland, in Round One made it look as if life was back to normal, and although it was great to see a stadium full of people enjoying themselves, chatting, eating and drinking, and acting normally, it also looked strange, especially to those in lockdown here.

I have no idea when we will see scenes like that again in this hemisphere, especially in the UK.

As far as the rugby spectacle was concerned, we saw plenty of things we’ve come to expect from skilful, accomplished New Zealand players, and the new rules introduced for the tournament produced a lot of food for thought – especially at the breakdown.

There were 30 penalties in all, with a large number given for breakdown infringements, ranging from side entry to a delayed release by the tackled player. It’s been a long time coming, and in my view that clarity should never have gone out of the way the breakdown is refereed.

We have listened to referees telling players they are infringing, and then doing nothing but warn them, for far too long. Referees got into a zone where they were coaching players rather than penalising them, and the idea that we have to reset this, rather than it already being in place, is a sign of where we have got it wrong.

This is simply refereeing the game as it should always have been. You penalise a player and then tell him why, NOT tell a player he’s getting it wrong, and then let it go.

I’m happy with the sin-bin and a red card as they are, and I’m not convinced by the new red card ruling in New Zealand which allows for a player who has been sent off to be replaced by another player after 20 minutes.

It makes sense to me that if it is a bad enough offence then the price you pay is being a man short for the duration of the game – and if you don’t like it, don’t do it. Do we give drugs cheats a second chance in Rugby Union immediately after they’ve tested positive? No, and the same should apply to a red card.

The sending-off has been there forever as a deterrent. In the past the only way referees could stop cynical infringements was to blow offenders off the park by awarding multiple penalties which punished their team on the scoreboard.

The yellow card does the same more quickly. It is a warning shot to stop serial offenders, and I believe that two yellows becoming a red if a player is deliberately killing the game is completely justified – and if it leaves you with 14 men, you deserve it. There is no defence, because you are spoiling the game deliberately for players as well as spectators.

You sense that this partial red has been introduced more to stop the impact of teams losing players because of marginal decisions over dangerous play, such as players being taken out in the air, or high tackles – but that is also what the yellow card and citing process is for, so why introduce it?

In principle, it makes the whole disciplinary process on the field more of a grey area, and will create more debate and argument.

Until now it’s all been about player welfare, but if you have got a 20 minute red card what do you do if there is an assault? Anything that is deliberate, cynical and dangerous should always be a full red card with no player from the offending side allowed back on the field.

Overall, the games were pretty entertaining, with the Bryn Gatland drop-goal to give the Hurricanes a narrow home win over his dad’s Chiefs side a nice twist. It was also interesting to see Beauden Barrett making his first appearance for the Blues at full-back. I found it a bit odd because fly-half is his best position, and I’d always want to play in my best position.

I like the cup competition format, and it was noticeable that there were not very many knock-ons or dropped balls. The Kiwis don’t seem to make many mistakes, which means that they often keep the ball until they kick it.

The only area where the players struggled to adapt quickly was at the breakdown, where the big welfare issue is players flying-in at speed and taking people out. Fortunately, we didn’t see too much of that last weekend, but I still feel that the breakdown is massively important to Rugby Union’s future.

It is essential to have clarity and a fair contest. If you were teaching a kid about good technique, you would show them how to arrive at the break- down, bridge over the tackle while staying on their feet, reach over, and pick up the ball – and if you cannot do that legally, then create a platform for other players to bind onto.

The way the opposition can clear you off the ball legally involves coming through the gate before binding on to you and driving you backwards – whereas players coming in at the side, or diving into the breakdown off their feet, are automatically penalised.

The area which is still very contentious is when the tackler does not roll away from the tackled player quickly enough. There is a lot of gamesmanship that goes on, for instance, when a scrum-half falls over the tackler on purpose in an attempt to milk a penalty.

Rolling away is sometimes impossible, but these days the tackler is almost always penalised if they have not rolled clear.

In those circumstances it is up to the referee to make the decision, and not to be distracted by a scrum-half who should be getting on with his job of clearing the ball as fast as possible. The fairest solution is usually to give a scrum to the attacking side, rather than to award a penalty.

The 30-phase flows we see so much of in the modern game are boring, and if this cleaning up of the breakdown is applied consistently it will eventually encourage quicker rugby, with more clever passing and kicking into space.

It will be intriguing to see how it works out in New Zealand, because their players have the best skillsets in the world. If they cannot adapt quickly, then no one will – but I am optimistic they will get to grips with it, and that it will be a massive positive for the game.