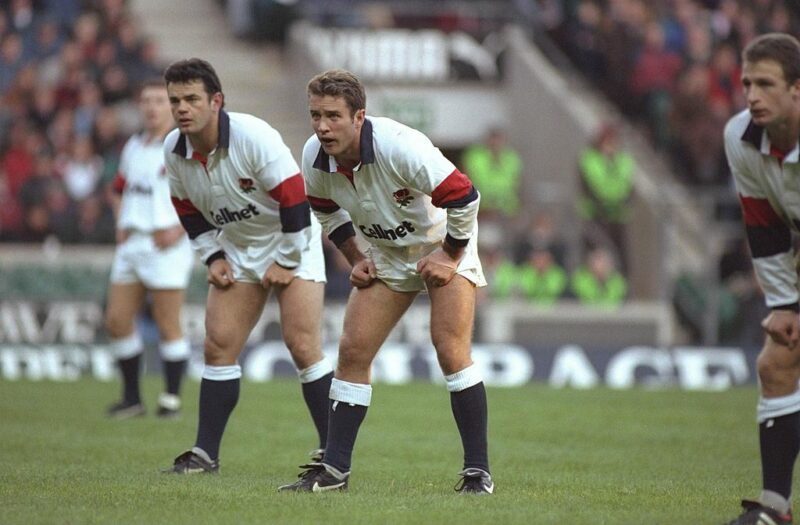 RFU board of director Phil de Glanville reflects on his rugby career which drew acclaim at club and national level with Bath and England.

I MUST admit I was just as unprepared for the madness surrounding the England captaincy as Bath had been a few months earlier in 1996 when about to face Wigan in the first leg of the Cross-Code Challenge.

Will Carling had been getting Press attention similar to Dominic Cummings at the time, with people camped on his doorstep, and seeing as I was succeeding him as England captain, it was big news.

Travelling to Twickenham in the back of the taxi, lying down in the back so no-one saw me on the day of the official announcement… stupid things like that were happening. The Press even went to the school where my wife was teaching to interview her. I thought, “woah, this is not what I expected”. It was quite a strange time and I was conscious of trying to bring the captaincy back to what it should be and away from the celebrity focus – not that Will looked for it – that it had become.

Obviously, Will had been a tremendously successful captain and a great player as well, and done a great job in the build-up to professionalism. So rugby was at a pretty high-profile stage anyway. Put it this way, he wasn’t an easy act to follow.

On the playing side, I really enjoyed being captain in that first year. We had a lot of new players – five new caps for my first match – and I really enjoyed integrating the team and getting the newcomers comfortable. Even with a new-look team, we had a very successful Six Nations in 1997 and were only four points away from a Grand Slam. The rugby we played against Ireland, over there in Dublin, was sublime: we put 40 points on them. However, we blew a 20-6 lead to lose 23-20 at home to France. I still kick myself about how we lost that match.

People talk about the season structure now but, looking back, it was crazy that we had a one-off Test against Australia at the end of that summer, a month or so after we’d drawn a series in Argentina. It also came at the end of the Lions series win in South Africa. The English guys involved with the Lions joined up with us, but they were done, physically and mentally, after such an intense experience, and we lost heavily 25-6.

I went to two World Cups with England, in 1995 and 1999. I’d been to South Africa before they hosted the tournament, as part of the first squad to tour in the post-apartheid era. It was a hell of an experience, but it was clear that a lot of work needed to be done for the old wounds to heal. To hear some of the racial abuse directed towards our black players was unbelievable. But whatever was thrown at them, in one case a Naartjies (big orange), they – Victor Ubogu, Steve Ojomoh, Paul Hull, Adedayo Adebayo – took it very well and showed what class individuals they are.

As for the rugby, I always enjoyed playing against South Africa, because you knew what you were going to get. I’d made my England debut against them in ’92, at Twickenham in November. But it was very different in ‘94. The ground was bone hard; the sun was on your back… the conditions were so much better for a running game. No-one gave us a chance, but we turned them over in the first Test in Pretoria.

For the 1999 World Cup, we prepared at a place called Couran Cove in Australia. It was a whole month of training – three times a day – and I remember that being the hardest we’d ever worked a squad. The whole nutritional and conditioning side went to another level. Feeling in better shape than ever before, I started the tournament really well with a good performance against the All Blacks in the pool stages. Again, it was a great experience – until Jannie de Beer started kicking drop-goals over our heads in Paris. I didn’t know it at the time, but that was to be my 38th and final appearance for England.

All my club rugby – just over 200 games – was played at Bath, although Bristol were the first club to show an interest.

I was at Durham Uni and got picked by England to play at the Student World Cup. One of our coaches, Bob Reeves, was a big Bristolian and, afterwards, he asked me which club I was at. When I said I didn’t have one, he invited me to trial for Bristol against Clifton in their traditional Boxing Day fixture. I touched the ball three times and wasn’t exactly impressed by the style of rugby. Luckily for me, the Bath scout, Dave Robson, was in the crowd and rang me up the next day and asked if I wanted to try out with them. I thought, ‘why not?’

My first run out was for the United second team, against Cardiff. It was an amazing game of rugby. The philosophy was so different, it was all attack, attack, attack, and by the end, I was almost begging not to have the ball.

Obviously, my decision to join Bath was one I have no regrets about. To play for and captain such a great club, at a time when we won so much silverware, was just superb. We were always searching for perfection and the closest we ever got was a midweek league game against Gloucester. Gloucester have never been anything other than decent, but we put about 70 points on them (71-21) in the 1996/97 season. We had this concept of ‘early ball’, where the ball went just before the tackle virtually every single time, and they just couldn’t live with us. Dave Sims said afterwards that every time they tried to hit us, the ball had already gone.

The year 1996 was a memorableone, and not just because I became England captain. At Bath, we’d secured the League and Cup double with a niggly win over Leicester and then it was on to uncharted waters with the League game against Wigan.

For the first time in my career I was genuinely scared before a match, because I knew how woefully unprepared we were. We’d celebrated appropriately on the Saturday night after our Cup win, had the traditional boozy BBQ around at Jack Rowell’s house on the Sunday, and then had a training match against South Wales RL side on the Bank Holiday – two days before the Wigan match! By the end of that run out, we knew we were in no shape to play under different rules against the best team in the world. In the first 20 minutes, we spent the whole time defending. They came up at us so fast and we dropped the ball virtually every time on the second carry. We got an absolute thumping (82-6) and chased shadows and made tackles all day. That said, it was a great experience, and at the end of the second Union game (Bath won 44-19), we stayed up in London and I found myself with some of the Wigan boys in a bar. There was a grudging respect from both sides; the players realised just how different the two games were.

My career highlight with Bath was the 1998 Heineken Cup win against Brive. My wife had given birth to our first son about two weeks before and there had been complications, so I ended up flying out a couple of days later than everyone else, and arrived in France on the Thursday. I rocked up and did the final team run but I didn’t really know where I was; I was in a bit of a weird state of mind.

Running out for that final, the atmosphere was amazing. Our 3,000 fans made an incredible amount of noise. The game was so nip-and-tuck, and the fact that we came out on the right side of the scoreline was superb.

Afterwards, there wasn’t any food laid on for the players so John Allen, the team manager, said ‘come on then boys, let’s go get something to eat’. The team bus pulled up in the main street in Brive and we all got out and piled into McDonalds, and he ordered 25 Big Mac meals on his credit card.

After retiring from rugby in 2001, I never really had the calling for coaching like Nigel Redman, Andy Robinson, Martin Haag, JC (Jon Callard). I went down a different path, initially working in the technology sector.

Apart from a couple of years though, I never really left rugby. Jake, my eldest, played minis and that got me back involved again at the local rugby club and my other children followed suit, with Tom now on the books at Bath. From a working point of view, I remained closely involved with rugby through my time with Sport England and Hartpury College and now, in my present position as a board member of the RFU. Who’d have thought I’d become one of the old farts Will so famously referred to back in the day!