Posted on 22nd June 2020 by admin in Dream Team, Features 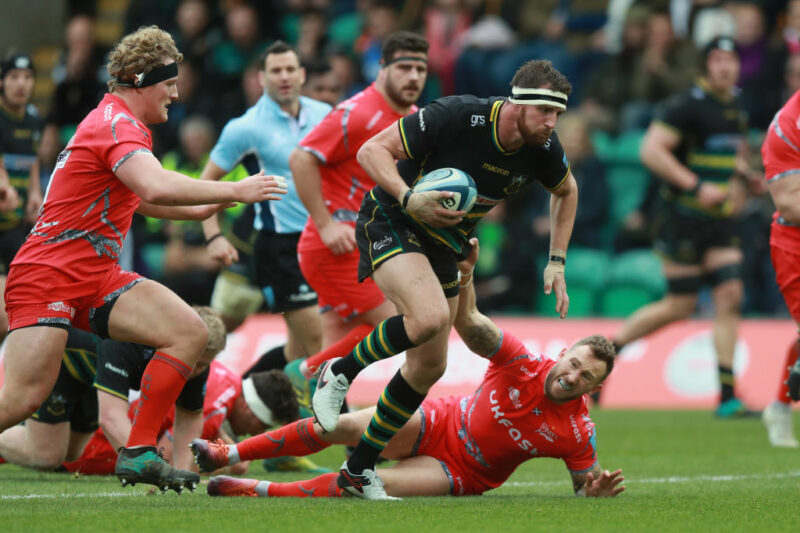 England and Northampton Saints flanker Tom Wood, formerly of Worcester Warriors and the Saxons, picks a dream XV based on the best he has played with or against.

Sticking with my old mate. Tragically not capped for England despite touring in 2014, Titanium Man is almost invincible (ironically, as I write he’s recovering from a ruptured Achilles!) and holds the record for most consecutive Premiership appearances.

Dylan has all the leadership, gravitas, toughness and career stats as Saints and England captain to go down as one of the all-time most successful men to pull on the jerseys.

Nearly went for Mikey Haywood as he’s one of the best and most committed all-round players and took his place during Dylan’s numerous weeks away with international duty, injuries and suspensions.

Mentions also for Schalk Brits and Danes Coles, two of the best footballing hookers ever.

Lucky to play alongside guys like Owen Franks and Brian Mujati at Saints but to avoid just picking all my team mates, I’m going with Carl. I don’t know him personally but used to love watching him play. Colossal man to play against.

Played with and against some amazing second rows and they’re all good for very different reasons. Big Vic was past his best by the time he arrived at Saints but he changed the game and certainly our lineout. One of my favourite players as I grew up in the game and it was a pleasure to share the field with him.

I’ve assumed I’m not picking myself in this team and am going with ‘Rig City’ Haskell – as much for off-field morale boosting as on-field performances. Great man to have in the squad, made my England debut alongside him and he has a huge amount of experience and physicality.

Could have been Heinrich Brussow, one of the best at his best, or Teimana Harrison at Saints who is as tough as they come, but I’m going with all-time legend status and hero of mine growing up, the one and only Richie. Beating NZ in 2012 is still up there as a career high.

Kieran Read, Billy Vunipola, Samu Manoa or Picamoles? Brutal decision to make. I’m going with King Louis as he was one of the most casual men in training and in the build-up to big games and barely spoke a word of English, but playing against him he was an absolute nightmare to tackle and playing with him the biggest challenge was hurdling all the bodies he’d knocked over to support him!

Loads of options again but I’m going with Cobus as he was devastating to have in your team. Scored a breakaway try for South Africa against England with raw pace and I’m fortunate to have seen him score and save multiple tries with the same pace over the last few years with Saints.

Not someone I know personally, nor have I ever been within arms’ reach of him despite playing against him numerous times. Beats players so easily and scores tries only he can score.

Arguably out of position here but I’ve got to get him on the field.

Could have been Manu here, but O’Driscoll was pretty peerless. Honourable mentions go to George Pisi, Conrad Smith and Aurelien Rougerie.

Unbelievable athlete and one of the nicest blokes in the game. Great to have in your team and someone to be very wary of when he’s with the opposition.

Sticking with my international roomy here. Billed as one of the most miserable and angry room-shares in world rugby but it worked well. So reliable under the high ball, left foot kicking option and elusive runner.