Williams column: I shudder at the way Dan Carter destroyed the Lions ’05 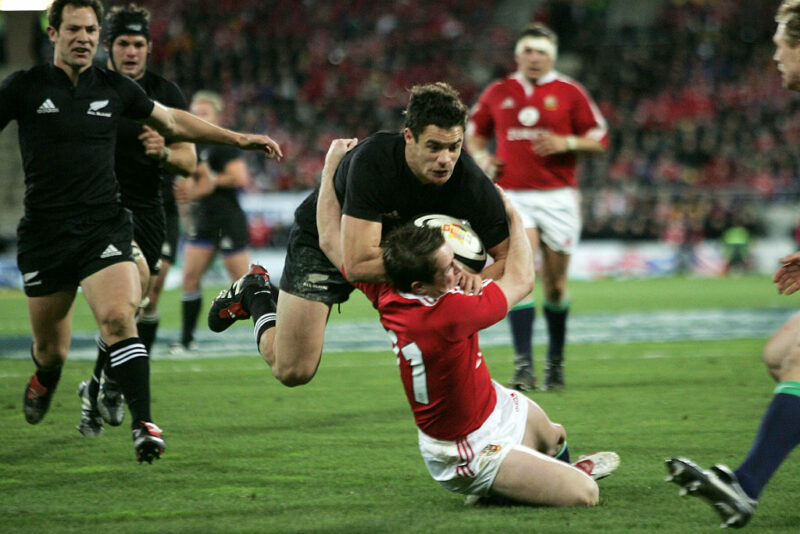 You can’t keep a good man down – and Dan Carter is one of the best men ever to play our great game! He may be 38, but the whole of the rugby world can’t wait to catch a glimpse of him playing again over the next few weeks in Super Rugby Aotearoa.

His return has promoted a lot of debate about whether he will still be able to play at the same level given his advancing age. Some say he could play on till he’s 40, others think it is just a publicity stunt. Whatever it is, I can’t wait to see him in action again.

I played against him a number of times and I still have nightmares about the way in which he completely spoiled my Test debut for the British & Irish Lions in 2005. I wasn’t selected for the first Test, but got given the nod for the next game in Wellington. What he did to us there has never left me – it was a one-man demolition job!

We went 7-0 up with a try after only two minutes and we were full of hope. By the end of the game Carter had put the boot into us and scored a record 33 points in a 48-18 victory. I’ve never seen one player so totally dominate a game. Everything he touched turned to gold – he handed off our most physical forwards, outclassed all of our backs and kicked with unerring accuracy. That’s what he was capable of in his prime and on that day he was simply unplayable.

He was quite rightly named the World Rugby Player of the Year – the first of three titles he won during his incredible international career – having ended the series against the Lions with a haul of 44 points in two games. But where is he at now, physically and mentally, 15 years on from his heyday?

The longevity of a player obviously depends on the position in which they play and the injuries they have suffered down the years. But a huge part of being able to carry on and compete at the top is down to mentality.

All the reports I’ve heard from Japan, where Carter was playing until recently, was that his approach to training and playing was exactly the same as when he was playing for the All Blacks. That doesn’t surprise me at all given the way he has always approached the game. He always believed he was the best player in the world!

But as you get older you have to become more realistic about your performance levels. If you think you can still run through a brick wall and run 100 metres in 10 seconds then you are in for a rude awakening. As I got older I found my pace dropped off, my sidestep wasn’t as sharp and I had to work even harder in training to keep up with everyone else.

When you get to that stage you have to use your experience and game craft to give you an edge. Carter won’t have any problem in that department. He has always been a master tactician. His kicking is superb, he has a devastating hand-off and can not only sniff out a gap for himself, but put players into space.

My only concern for him is that he will be coming out of a Japanese rugby environment, where he was getting an armchair ride every weekend in the top side in the league, into an ultra-competitive New Zealand competition where reputation will count for little or nothing.

I’m sure Beauden Barrett will love having his predecessor in the All Blacks No.10 jersey lining-up with him in the future and just think how young Otere Black will be feeling having the two of them alongside him in the Blues squad. Carter’s influence on those around him, even in training, will be worth the price the Blues have paid for his services alone.

So can Carter go on until he is 40? If he can survive the next few weeks then there is no reason why he cannot continue to play for as long as he wants.

I applaud Ashton Hewitt for speaking out

If that was an important statement in these difficult times, the actions of the Dragons wing Ashton Hewitt in highlighting some of the difficulties he had growing up in Newport provided an even stronger message.

I applaud him for his stance and, if I could at the moment, I’d put my arm around him and say ‘well done’ for speaking out. It is easy to say racism isn’t a problem in rugby. What we’ve seen in recent weeks with the incident at Pontarddulais rugby club, where a player suffered online abuse, proves how blasé people can be about using blatantly offensive language.

Rugby’s culture is built on respect for all, regardless of colour, creed or nationality. The game rightly champions its values, but voices like those of Ashton Hewitt need to be listened to. He is a vital and valued part of the Welsh rugby community. Respect.