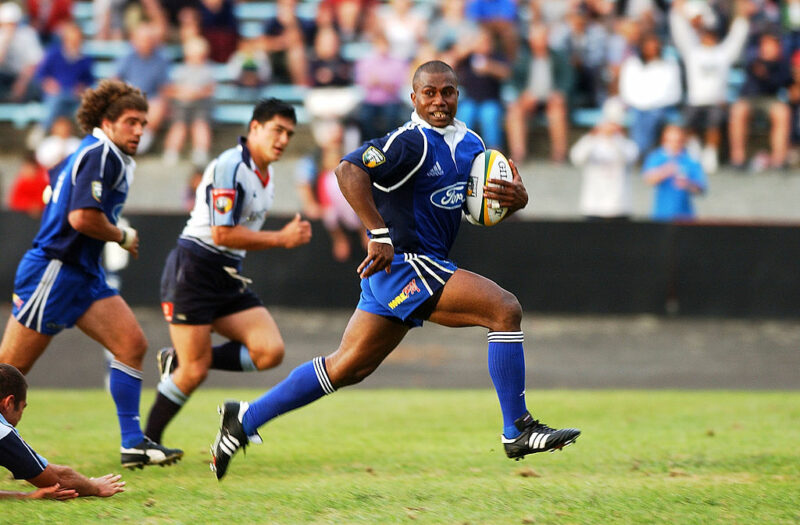 In our new Top 20 feature, Brendan Gallagher ranks the players who, for one reason or another, didn’t quite hit their peak.

Here, our countdown reaches its climax.

The magical Fijian wing who scored tries of wonder for fun but couldn’t alas really cope with life away from his Pacific paradise. Built like a prop but with 10.4 100m speed and the balance of a tightrope walker he could blast his way through, absolutely kill you for pace on the outside or tiptoe delicately along the touchline.

Any all-time Super Rugby top ten tries compilation would include four or five efforts from Caucau from his truly halcyon days with the Auckland Blues when even the likes of Doug Howlett, Mils Muliaina and Carlos Spencer took second billing to the great man.

Ditto with the Top 14 in France where he was often unstoppable for Agen. But, alas, he played just seven Tests for Fiji in eight years, scoring eight tries in the process, and one Test for the Pacific Islanders with another try. Any one of his three tries for Fiji at RWC2003 could have been a candidate for try of the tournament and the disallowed one against Scotland would have won outright. He should have been the next global rugby figure after Jonah Lomu.

In his pomp Caucau was remarkable, so much so that after impressing for Fiji on the Sevens circuit the All Blacks tried to get the IRB eligibility rules changed just so they could tempt him into their ranks.

Caucau was rugby gold dust but he could also be infuriating – ill-disciplined and badly organised. He didn’t train much, he lost his passport more than once and let club and country down on numerous occasions. He could be frustrating and unfathomable but a delightful documentary on him recently made by the Pacific Rugby Players Welfare Association showed him in a different light. A humble shy man committed to his village and family back home in Fiji, a trail blazer in terms of a Pacific Island player being courted around the world, an individual way out of his comfort zone, he made mistakes but had very little support.

In the pantheon of scrum-halves I rate this guy just behind Gareth Edwards and Joost van der Westhuizen yet he won a solitary Wales cap, against Australia in 1984 when he scored the only try against the Aussies in their Grand Slam Test tour.

The Bish had a number of things going against him. He had spent time inside for GBH at a time when a number of South Wales police personnel held high office within WRU circles, not least Wales manager Rod Morgan.

Second he played for Pontypool who were loathed and despised by many in Wales for their ruthless winning ways. Wales happily picked Pooler’s enforcers up front but pointedly ignored their backs. And third the Wales chairman of selectors Clive Rowlands was the father-in-law to Bishop’s biggest rival, Robert Jones, who was an extremely fine Test scrum-half, well worth 50 or more caps.

But The Bish was better, a one-man army. Incredibly strong and physical –he boxed for Wales – clever, canny, great pass, nose for the try-line, phenomenal kicker out of hand and at goal when needed. He’s the only nine I’ve ever seen kick a dropped goal straight from a line-out. He did it twice, against Bridgend and Newbridge. He was stardust and yes he could go over the top occasionally as with the punch on Chris Jarman, but while such incidents seemed to enhance the reputation and notoriety of some Wales players, they were always cited as evidence against picking the Bish for Wales. Eventually he turned professional with Hull.

Five England starts in total and just one in the last 12 years is an absolutely pitiful and unfairly meagre return for the most talented English playmaker of his generation.

England coaches have refused to trust him yet have consistently allowed much greater leeway and poor behaviour from other errant and less talented players. Yes, he was brash in his early years – he’s not alone there – and he attracted suspicion/envy for squiring a bevvy of beauties. There have been a couple of drink related incidents but others have escaped detection or censure for much worse as the rugby community at large well knows.

He’s the only player I have seen red carded for trying to not make a tackle, as was the case famously against Munster when even the Thomond faithful felt sorry for him. The only conclusion you can draw is that those in charge just don’t like the cut of his jib.

Since returning from his exile in Australia you can count the number of poor games for Sale, Wasps and Gloucester on the fingers of one hand. He doesn’t get involved in fights or thuggery, foul play or bad mouthing opponents like many others. He has worked on his tackling and workrate and his passing and game management can be a joy to behold. One of the few English players who, on their own, are worth the admission money.

Three Test match starts at hooker and one at No.8 in a 14-year long Test career is simply not acceptable for probably the best overseas player to play in the Premiership. What a waste and what on earth were South Africa thinking of? This man was a quite brilliant all-round rugby player and team enhancer.

OK, in 2007 John Smit was an inspiring captain and that strong scrummaging South Africa side were not going to change to accommodate one player. But Smit was past his sell-by date in 2011 when Brits should have been the first-choice hooker and had he made the place his own then greater glories might have followed in 2015. There are lesser players than Brits who have won 80 caps or more.

‘Sinbad’ was one of the most gloriously talented England wings of his generation yet somehow ended up with only ten caps with just seven starts. For a couple of years he was also the star turn at the Hong Kong Sevens where he outshone all the Fijian and Kiwi dashers culminating with a hat-trick when England beat Fiji 33-20 in the memorable 2002 final. Short but deceptively strong and powerful Simpson-Daniel had the lethal combination of great feet and long range gas. They loved him to death at Kingsholm but England didn’t reciprocate.