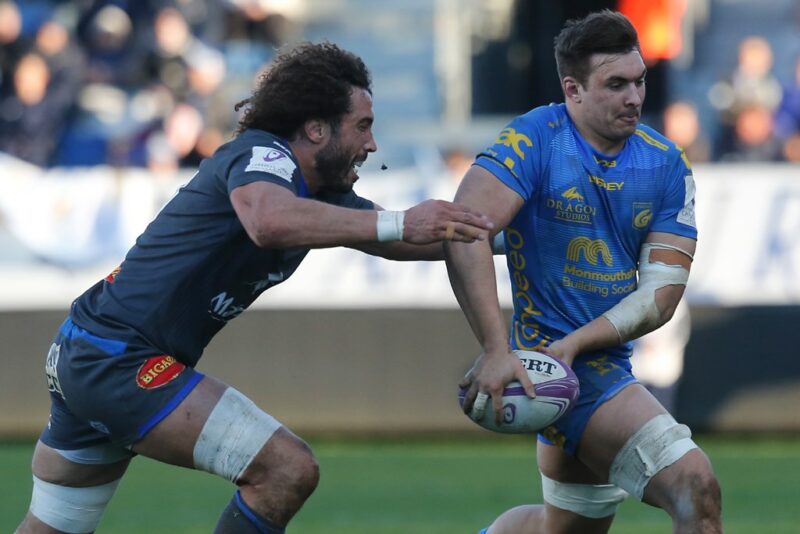 In Wales we never seem to have a problem in bringing through young players and right now it appears to be the back row which is the hottest area of the production line. To me Taine Basham looks like he has a very bright future ahead and I’m hugely excited by what he could go on to achieve in the game.

It’s remarkable really when you assess the options Wales have at flanker and also at No.8 right now and this isn’t a new situation either – it has been the status quo since the 2015 Rugby World Cup.

Basham is the latest name to break through and he must be good if he has a fan in Sam Warburton! In my media work covering the PRO14

I have watched a lot of the Dragons and Basham is someone who always seems to stand out whatever the game situation.

That is impressive because although he is playing in a team which is improving under Dean Ryan, the Dragons are often underdogs in the matches they play. For a 20-year-old to be in that situation and still produce man-of-the-match displays is remarkable. I’m sure it won’t be too long before he is rewarded with a senior Wales cap.

I don’t know Basham personally, but I’ve heard great reports on him from the Dragons set-up. You only have to see him play to realise what he can do, but my understanding is he’s very grounded and works hard at his game. That’s good to hear because the last thing you want is for young players who have the talent to succeed at Test level to get ahead of themselves too early.

Basham is all action and I love that. He’s captained Wales U20 and played Wales Sevens, and he can play across the back row too. That could be a priceless asset moving forwards.

Basham has already been rewarded for his fine regional displays with a place in the Wales squad for the Six Nations just finished. He was also involved in the squad for the game against the Barbarians at the end of last year and I’ve liked the approach Wayne Pivac has had in bringing younger players into his Wales squad. Being around senior players like Alun Wyn Jones, Ken Owens and Dan Biggar is such a priceless learning curve for the next generation.

By being around the senior Wales set-up players like Taine will have already picked up so much. To be a success at Test level it’s not just about your raw talent. Of course without that you’re not going to make it, but alongside ability you also need dedication, perseverance and a bit of single-mindedness.

And he has all the right guidance around him; in Dean he has a perfect boss at regional level. Dean has been there, seen it, and done it and he’s probably forgotten more about rugby than most of us know combined!

At Test level, Wayne is clearly a fan and with Sam in his back room team, Taine couldn’t wish for a better sounding board. When you’re trying to make your way in the game, who better to learn a thing or two from than a former Wales and British & Irish Lions captain?

I did think the planned summer Test with Japan would have been the perfect opportunity for Wales to give players like Basham a first taste of international rugby. I would have also expected guys like Louis Rees-Zammit, Dewi Lake, WillGriff John, Will Rowlands and Jarrod Evans to get a chance in that game. Of course the continuing uncertainty caused by the spread of coronavirus means we don’t know at this stage if that Japan game and the two-Test tour of New Zealand will go ahead.

I am no medical expert so won’t comment on whether they should take place or not, but if the Japan game were to be cancelled it would be a great shame for Wales’ younger players.

Clearly global health has to come ahead of any rugby match, but at the same time, there are few options available for a head coach to look at his next generation.

Japan would be one of those chances for Wayne to do just that.

Taine is getting a lot of the headlines, but he is not alone in being a talent coming through the Welsh ranks. He has enough of a job getting a start in the Dragons back row because I like Ollie Griffiths there. Ollie is a similar sort of player to Taine, but unfortunately he has had lots of injury issues to deal with in the last few years. In the backs, Rees-Zammit is the obvious young gun to mention.

I was not hugely surprised he didn’t get a run in the Six Nations. It would have been a big call to throw him straight into the cauldron of Test rugby despite his remarkable form for Gloucester.

Like I’ve said consistently, we must not heap too much pressure on our next generation. This is where I think Wayne deserves praise for his canny management.

I’m sure it would have been tempting for him to pick Louis straight away. In my opinion he did exactly the right thing in giving him a taste of the environment. Like Taine will have picked the brains of Justin Tipuric, Sam and Taulupe Faletau, Louis would have been mad not to speak to George North, Liam Williams, Leigh Halfpenny and Josh Adams about what’s required to be a back three player at Test level.

I know Wales have had a fair bit of criticism after the Six Nations, but on paper they do have a good balance between youth and experience right now. The next generation is coming and Wayne’s eagerness to bring them into the senior environment almost on an apprentice-style basis could yet prove to be a long-term masterstroke.

Sam Costelow is another one. He was superb for Wales U20 in the Six Nations. His performance against England at Kingsholm was one I’ll remember for a very long time and he’s also had a run in training with the senior boys which will have benefitted him no end and given him priceless confidence.

These are tough times at the moment with no rugby on, but whenever it does get going again we must realise how lucky we are in Wales to have such talent at our disposal.

We are a small country, but also a great rugby nation and we continue to produce fine players. Our pathway and system is working and working well. Taine – among others – is an example of that.

It might be difficult to look to the future right now, but rest assured – it looks bright for Wales.