Posted on 19th June 2019 by admin in Featured, Features, My Life in Rugby 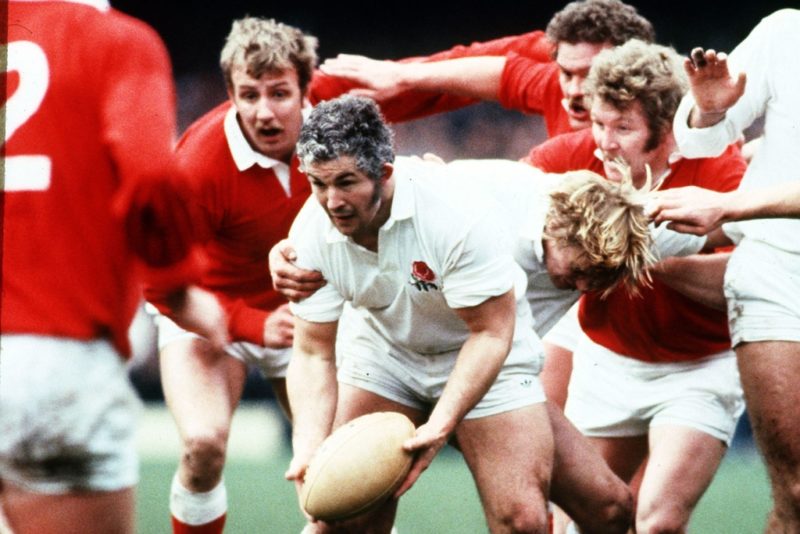 After we’d won the Grand Slam up in Scotland in 1980, England’s first for 26 years, Bill Beaumont shut the changing room door and shook all our hands and said, ‘We’ve now laid the ghost’. For some of the side that was their last game. Roger Uttley and Tony Neary were two who never played for England again.

For me, it was a case of being in the right place at the right time – my first cap was the first game against Ireland during the Slam. I got injured against the French and I didn’t realise at the time, but I’d broken my ribs near the end of the game. I was given some smelling salts which blew my ears off – they were big enough! – and the physio said, ‘walk with me to the next scrum’.

The pivotal game was the one against Wales, which we won 9-8. It wasn’t an edifying game. War broke out before the first ball had landed. The referee had called the captains, Bill Beaumont and Jeff Squire, to one side. Bill came back and said that the next player who does anything would be sent off. Wales flanker Paul Ringer’s tackle on John Horton was late and high but it wasn’t that bad, it was unfortunate he got sent off.

Friends of mine in Wales still say they should have won, and they’re right. If they’d have kick-ed their conversions, they would have. One of them said it took 15 Englishman and the referee to beat 14 Welshmen.

Thankfully, Dusty Hare, the old Hare-Bear from Leicester, slotted his kicks. My father met some Welsh supporters on the tube on the way home and they’d left before the final whistle thinking they’d won. He didn’t have the heart to tell them that we’d pipped them in the end!

For the Scotland game, I wore an American rib guard, but I got whacked in them again. As I crouched over in pain, Fran Cotton came over to me and asked what was up. I said, ‘I’m going to have to go off’, to which he replied, ‘you can’t leave the pitch now, you’re ten minutes away from history’. I told him I couldn’t run, and he said, ‘well, you haven’t for the last 70 minutes, why worry now?’ Many a team have gone up to Scotland with ambitions to win a Grand Slam and have come away having got thumped, so for us to do it was really special.

Following the Five Nations, they announced the Lions tour to South Africa and I was in it. I knew I was in trouble though with my ribs. I managed to play in one game, against a Federations XV in East London. We were winning

28-0 with five minutes to go when I came off. Fran cussed me because he’d taken his boots off and had to go back on. When I got back to Jo’burg, the x-ray showed that I’d broken my ribs, but they said it had happened before the tour. There was a bit of bone floating between two of the ribs.

I’d left my wife at home with our little daughter and a son who was six weeks old so I decided to head home. One thing I treasure greatly is the cap I received last year, even though I played only one game. The Lions started in 1888 and every player who has played for them, got a cap. I am number 559.

In my late teens I had to make a choice between modern pentathlon and rugby. I was good at the shooting, fencing and riding – I was reserve for the 1968 World Junior Games – but running and swimming weren’t my forte. Rugby was easier.

I played for Cheltenham Colts, Cheltenham 1st XV and then had 14 years at Gloucester. I think I played 140 games for the United which was about the same number that I played for the first team, on both sides of the scrum although I suppose I was probably best known as a tight-head.

When I joined Gloucester as a 19-year-old it was a sharp learning curve. Robin Cowling and Mike Burton had both played for England, and there were other fellas like Keith Richardson. I did once get picked on the wing for the Middlesex Sevens, but I was getting married on the Friday and my wife insisted I didn’t play. My marriage has lasted a lot longer than my rugby career. She has put up with me for 46 years!

Unfortunately, in 1977, I broke my neck and had to have a couple of years out of the game. I broke it on the Wednesday, played on the Saturday and found out on the Sunday. I was very lucky, really. My wife was pregnant with our daughter and she was born six weeks later. I thought broken bones were pretty tough but seeing a women have a baby, that is something else. I reckon it is a lot bloody harder than having a broken neck.

In 1982 I played in the only drawn Cup final, against Moseley. It finished 12-12. Paul Ford, who is the son of Peter Ford, kicked a penalty to take the game into extra time. It would have been interesting to have seen us old farts take part in a penalty shootout!

I’m in my late 60s now and I went to a dinner party the other day where a chap said to me, ‘did you play?’ I looked at him and said, ‘a long time ago’. Later on, some other people on the table told him my background and he was most apologetic. I told him, ‘hey, my last international was in 1985, don’t worry about it.’

It is only when you finish playing that you realise the enormity of playing alongside some of the most-capped players in their position at the time. Fran Cotton was a ‘74, ‘77 and ‘80 Lion, Peter Wheeler had gone on the ‘77 and ‘80 tours, Roger Uttley and Tony Neary both toured with the Lions in ‘74 and ‘77. Then there was John Scott who’d won 40-odd caps for England, plus Bill Beaumont and the great Maurice Colclough who is sadly no longer with us. It was easy to fit into that organisation. The team knew what they were doing, I just jogged behind them.