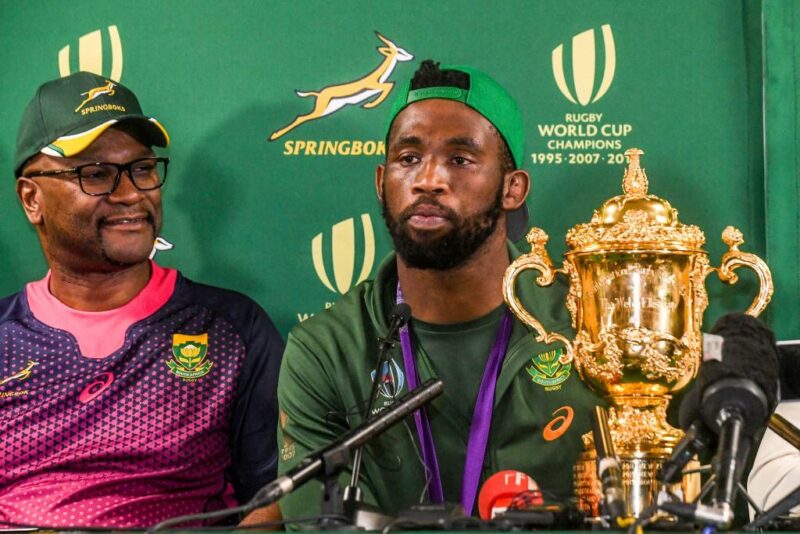 Tommy Bedford’s journey of a lifetime began 50 winters ago on the rocks of a Welsh seaside resort, a fitting image for a Springbok tour run aground by anti-apartheid demonstrations.

At the end of three troubled months, the beleaguered Boks finished up in Porthcawl, at the Seabank Hotel where the lawn rolls down to the rocks. Bedford sat there with a few friends including one of the more renowned Springbok captains, Avril Malan.

“We knew that no country could afford another tour like this,’’ Bedford said. “That was the catalyst for change in a radical way. There would have to be a political journey. Like my personal journey, it would be long and difficult, one which would get me into a lot of trouble.’’

An architect by profession, Bedford, in harness with like-minded visionaries, converted the whites-only privileged rugby landscape of South Africa into a multi-racial one with startling results.

From his vantage point at home in West London, he saw something in Yokohama he never thought he would see – a black captain of a world-beating Springbok squad.

“I went to a deserted part of the country where there are hardly any people. And there I thought about Peter Hain, Bernadette Devlin and all those anti-apartheid people who put us in this laager.

“I came to the conclusion that maybe they did have a point. The events of 50 years ago started the process of the shutters coming down but it meant finding an answer to the difficult question of how to unite South African rugby into one multi-racial sport and what my personal role would be.’’

Bedford recognised his immediate omission from the Springbok team as part of the inevitable price for taking a liberal stand.

He refused to be distracted from the pursuit of an objective which made his an invaluable presence in painstaking talks with the exiled African National Congress party.

They met in Dakar, Lusaka, London, Frankfurt and Harare, talking to future presidents in Thabo Mbeki and Cyril Ramaphosa. The late Louis Luyt, then the biggest single power-broker in South African rugby, identified Bedford as the man who had set the wheels in motion.

Bedford says: “In trying to get the black and white sports integrated, like rugby, cricket and athletics, one received a whole lot of flak especially after news got out of the Dakar talks. It took 19 years from the start of my journey in 1969 but we got there in the end.’’

Bedford, long forced by the flak to seek a more peaceful life in London, could never have imagined during that tempestuous tour of Britain and Ireland that in 50 years time his successor in the Springbok No.6 jersey would be a black man from a township and, what’s more he would be the captain.

Watching Siya Kolisi lift the World Cup towards the heavens in Yokohama three weeks ago, Bedford, lean and fit at 77, went back in his mind’s eye to where it all began.

“We’ve come a very long way from Porthcawl on the rocks and the day we agreed that if South Africa wants to play international sport, we are going to have to have change.’’

The change took longer than Bedford would have hoped but its impact has gone beyond his wildest dreams. Could he have ever imagined 50 years ago watching a Springbok team with black players on both wings, at centre, prop, hooker and in the back row with more on the bench?

Would he even have dreamt of a world-beating squad virtually one third of whom were non-white, none chosen to meet some Government quota but each and everyone chosen strictly on ability, irrespective of race?

“No, I don’t think so,’’ he said. “You’re right, they have all been picked on merit. What I tried to suggest all those years ago was that one route for black people to get to the top in South Africa would be through sport.’’

Siya Kolisi, Makazole Mapimipi and all the others would never have got there had it not been for those with the vision and courage to blaze the trail, people like Tommy Bedford.

Nobody seems to have advised Stuart Hogg of the old proverb about never judging anyone without first walking a mile in their shoes. Had he grasped its meaning, the Scottish Lion would have thought twice before making the crass remark that Sonny Bill Williams didn’t ‘care enough’ after the All Blacks knock-out by England.

Nor did Hogg find the humility to stop and count what the multi-dimensional New Zealander has achieved and compare it with his own infinitely more modest record. This, remember, is the same Sonny Bill who gave his World Cup winner’s medal to a schoolboy at Twickenham straight after the final and his boots to a Japanese boy after the third-place play-off.

Maybe in Hogg’s mean book those two gestures would fall into the ‘doesn’t-care-enough’ category.

He even had the temerity to suggest that Sonny Bill is ‘motivated by money’, a reference to his seven-figure deal with the Toronto Wolfpack Rugby League franchise.

Presumably Hogg’s summer move from Glasgow to Exeter had nothing to do with money.