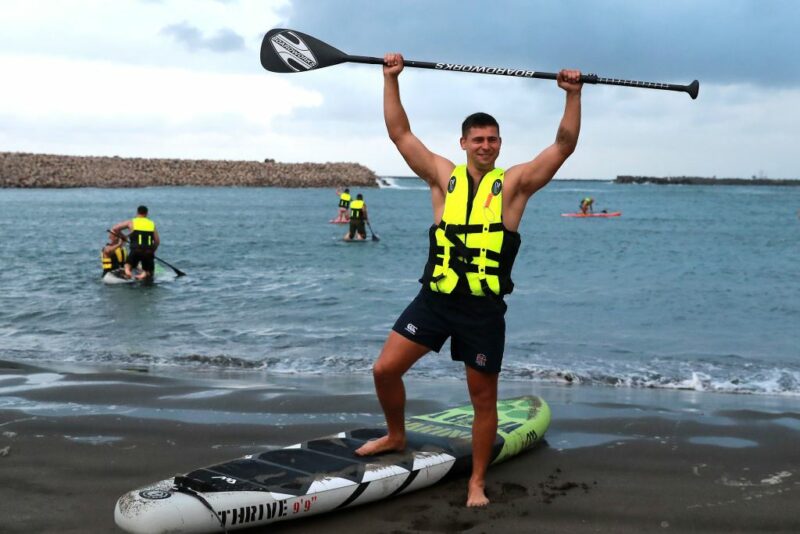 As we have a short hiatus before everybody boards the plane to Japan, these few weeks remind me of my time playing the international game of rugby.

Club rugby was a pleasure which occupied my Saturdays to escape the pressures of working all week in the family factory, making and polishing different pieces of furniture.

With an early start to a long day doing every job that needed to be done before twice a week driving halfway across London in the rush hour for training in the hope of being selected, it was all a bit hectic with little or no time to think your own thoughts.

As someone who played rugby from schooldays and was now the father of a young family, I was fortunate to have a wife who knew and understood that rugby gave me a sense of purpose and direction as I climbed the ladders of the game hoping to reach the top.

The club games were a mental break in that you had to be focused and not preoccupied with thoughts of work. With a celebratory or commiseration drink with your team mates and the opposition after, it was an ideal way to unwind from the pressures of work.

International rugby was different with a brief spell of life as a full time sportsman where all the days rolled into one with time to reflect.

Unlike the club game with the mad dash on a Saturday to get to the ground in time for kick-off, international rugby meant you stopped work on Wednesday and went to a hotel and checked into a room shared with another player.

Then training the next day, but with long breaks in the day that you somehow needed to fill either by going to the cinema or back to the hotel. A press run ( a short training run) on Friday till lunch and then some organisational team stuff and then you were on your own.

It’s during those times that you have to rely on your mental strength to give you the confidence to know, not think, you are better than the player you are playing against.

If you allow yourself the luxury of saying he is a good player but I think I am better than him, you are admitting a weakness.

In my head I always knew I was better than the player I was against, I may not have been but I knew I was, which when things go wrong gives you the confidence to carry on.

Some people may think that is arrogance but I always respected my opposition as great players but in order for us as a team to win, I knew I had to be better than them.

On a tour there is much more ‘free time’ and the constant intensity of selection forces players to confront their biggest fear, being dropped.

The hardest part of a tour is making sure the squad have enough training and match planning with a mixture of scheduled events to allow for social interaction within the squad filling all the days.

Failure to make plans can see players striking out to entertain themselves in an attempt to break the monotony of the cycle of play, train, travel, play.

A World Cup is the worst kind of tour, even when played at home, in fact probably more so, as the weight of public expectation and media speculation dissects every nuance of selection and games played.

A World Cup is also more pressured than a standard tour because if you lose, the team are sent home.

For the established players, seen as starters, it is slightly easier as they have the games to look forward to but for those new to the squad or finishers, the constant spectre of not being selected for any of the games is a major concern.

When I travelled to the first World Cup in 1987 as a non-capped player, it was my ambition to win a cap in that World Cup, particularly as England had both the USA and Japan, Tier 2 nations, in their Pool and were virtually guaranteed a place in the knockout stages.

I spent weeks training and sitting on the bench and hours alone convincing myself that when the team was announced for either the USA or Japan game I would be in it.

However, I returned to England without getting a game or my first cap, which to this day still rankles despite playing in all but one game in the ‘91 RWC.

In a country like Japan the feeling of isolation will be intense and Eddie Jones will know that in order to keep his team focused and on track, keeping them occupied will be key.

Jones has rightly got the team to Japan ASAP knowing the need for acclimatisation in such a different environment will be paramount if the team is to be successful, replicating the same sort of success you can achieve on https://freespinsbonuses.co.uk/.

As a player I was lucky to have a long playing career playing at all levels of the game but the most fun was always playing for the Barbarians. Having turned them down when I was first asked, I was surprised to be invited a second time but that game sealed a love and respect of the club and its culture, but mostly the man who embodied all aspects of that great club, Micky Steele-Bodger.

On September 4 a memorial was held for Micky at a packed St James’ church in Piccadilly, London, with many tales of Micky’s life being told by a myriad of rugby greats from across the generations and continents of the world. It was an honour to be there.

For those who never met him, it will be hard to explain the importance of his presence at the top of the game and all I can say is the world of rugby is a poorer place now he’s gone.