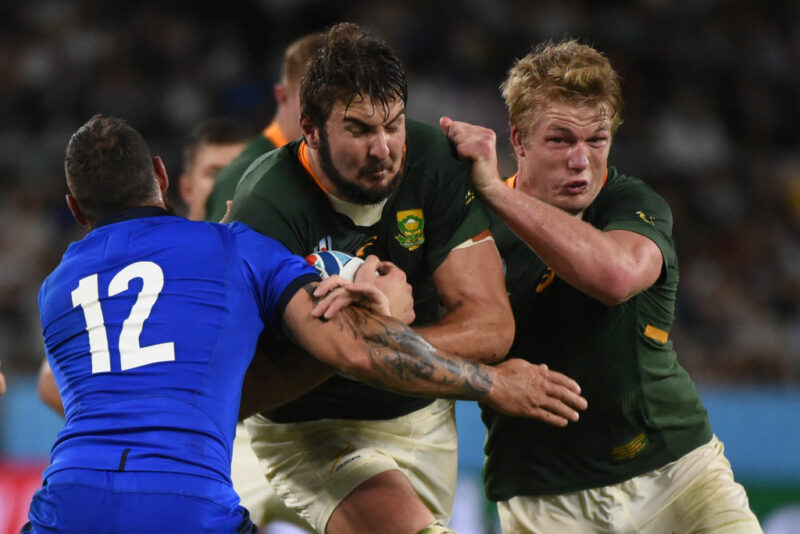 MAD keen as he is about golf, Lood de Jager can’t wait to swap the driving range for driving mauls as he prepares to make his long-awaited Sale Sharks debut.

The South African World Cup winner has come through a week’s contact training and is set to play in Friday’s home league game against London Irish.

De Jager arrived in Manchester in mid-January, following surgery on the shoulder he damaged in the World Cup final against England, and the 27-year-old can’t wait to experience the Premiership for the first time.

“I’m fired up and raring to go,” the towering lock told The Rugby Paper. “I’m excited to get out there with the lads and put a shift in, I really am. It’s been a long four months on the sidelines, but I’m settled in now.

“When you get to a new club you want to get out there and show the lads what you’re made of and that you mean business.”

De Jager believes the rigors of the Premiership will make him a better player. “I think the Premiership is the most competitive league in the world because anybody can beat anybody,” he said. “There aren’t games where you feel like you can just go and grab the points, you have to work hard for every single point.

“That can only help keep me sharp for when the international season comes around as well.”

De Jager, who has now suffered serious injuries to both his left and right shoulders in the last 12 months, wasn’t expected to return so soon from his latest setback.

“All compliments must got to the rehab staff at Sale, the physios and the conditioning coaches have done a fantastic job to get me ready,” he said. “The programme they gave me was really good. I just did what they told me.”

Now in his prime years, De Jager is keen to add to his 45 Springbok caps, and he says Sale boss Steve Diamond being fully on board with that was one of the reasons behind his decision to move to the Sharks.

“Dimes’ mentality around the whole thing is that he wants international guys coming in and the younger guys to learn from them,” adds de Jager.

“He doesn’t want to hold guys back; he wants the best for the players even if that means you’re away for a couple of weeks, because he knows a lot of experience comes with that. We’re all available for the big games: it’s a win-win for both sides.”

De Jager, though, has resisted the temptation to add further insult to injury.

“I’ve been pretty chilled. When Faf came back, it was still fresh, whereas by the time I arrived, it was two months after the final.

“There’s been one or two jokes but nothing like that. My medal is actually back home in South Africa at my parents’ house.”

Rather than play the practical joker, what little spare time De Jager has had around rehab and training has been spent enjoying the facilities on offer at the Trafford Golf Centre.

“There’s a pretty nice golf simulator here, where you can play virtual courses; I’ve really enjoyed that. It’s a bit of a treat because we don’t have a lot of them over in South Africa. I enjoy my golf, so it’s been good.

“I’m not the longest hitter, I just try to hit the ball as straight as possible, but it normally doesn’t work for me. Golf is the most difficult game in the world.”