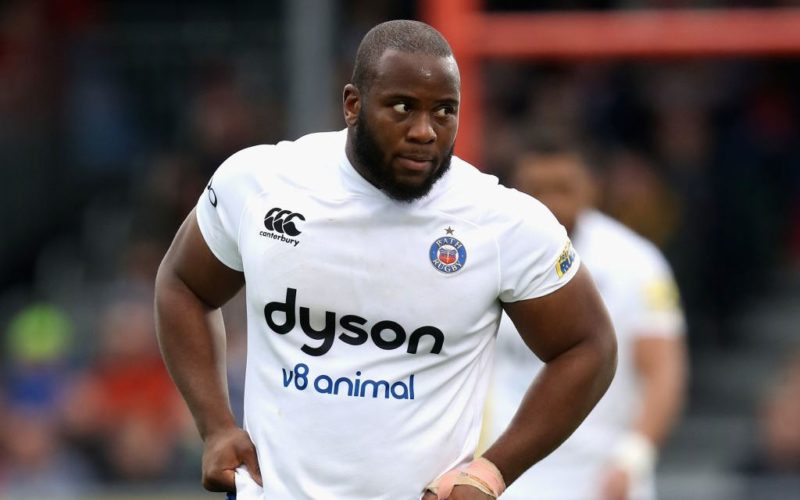 Miracle man Beno Obano can help fire Bath into the Premiership play-offs and boost his World Cup dream into the bargain, according to scrum guru Toby Booth.

Multiple knee ligament and hamstring tendon damage suffered at an England training camp last May appeared set to sideline the rumbustious prop for at least 12 months.

However, after a faster than expected recovery, Obano, 24, returned against Harlequins yesterday.

Bath coach Booth told The Rugby Paper: “Beno’s a bloke I’ve worked with a hell of a lot to get him where he wants to go and it’s great to see him back on the pitch.

“He’s come back remarkably well and the medical staff have done an unbelievable job, so he just wants to stake a claim now to get back into that international set-up.

“He’s got to gain some confidence, get fully back into the swing of it and get himself back up to speed, but he’s one hell of a player who has an awful lot to offer.

“Being in that situation where you’re getting your best players back on the pitch is what everyone wants and you really need guys like Beno to get into that shake-up.

“We’ve got Beno and Jonathan Joseph back while Anthony Watson, Sam Underhill and Tom Ellis are not far off the ball park, so that’s encouraging for the run-in.”

With his contract not being renewed by Bath this summer, Booth, below, is desperate to bow out a winner. “It would be massive,” he admits. “You can’t underestimate how tough this Premiership is and, although it’s never about me, if a few of the boys I’ve worked with can use that as an extra bit of motivation to get us into the top four, I’ll not discourage it.

“I’ll continue to do my best for the players and Bath because it’s important to leave the place and the players in a better state than when I arrived seven years ago – and I’m quite confident that will be the case because this is a good team we’re building here.”

Booth has not ruled out moving abroad or working in other sports, although he is proud of his record in rugby since joining London Irish as an assistant academy manager in 2002.

He added: “Nothing’s finalised yet but there are a few opportunities kicking around and you take each one on it’s merits, whether that’s home or abroad.

“I love coaching and working with people to make them better and I’m pretty proud of the things I’ve achieved, reaching six finals – three with London Irish and three with Bath – and helping a huge number of players become international players.

“I’m confident in my abilities and a lot of skills are transferable into other sports, so I wouldn’t rule anything out in future. I also enjoy the innovation side of sport around technology and where that can take the game, so there are opportunities there.”