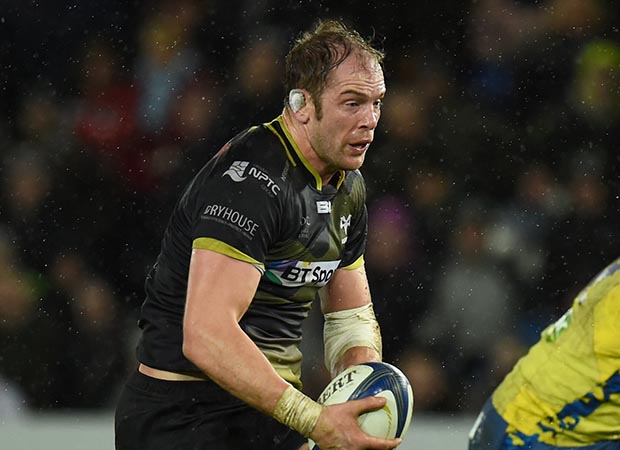 If his track record is anything to go by, Alun-Wyn Jones will pass another landmark towards the end of the coming season. His 400th competitive match is on the horizon, putting the durable Welshman on course to reach it faster than any other player of the 21st century. Nobody ought to be one bit surprised because nobody gets through games on a scale to compare with Jones.
He has averaged as close to 30 per season as makes no difference, not for one season but the last eleven. And that at a time when just about every other player contracted to his national Union plays no more than 25. Kieran Read tops the All Black list at 27.
By resisting all temptation to leave his native Swansea, Jones belongs to a breed increasingly rare in these times of mass movement.  He has stayed put since the most improbable of shotgun marriages between his home-town All Whites and the All Blacks of Neath gave birth to the Ospreys in 2003.
Since then Jones has risen from a lad likely to go to places to a second row whose worthiness as a Lion to stand comparison with Martin Johnson is beyond dispute. Over three Lions’ tours and ten largely ever-present seasons with Wales, he has never given less than a bucketful of blood and sweat for his club.
When former director of rugby Andrew Hore spoke in the hyperbolic language of professional sport about ‘dying for the jersey’, Jones was always the first name that sprang to his mind. Ospreys failure to win anything in the five years since their second PRO12 title would have offered sufficient excuse to cash in his chips and head for the supposedly greener fields of France.
Not even Paul O’Connell could resist that, wrenching himself from Munster to mine some Toulon gold before the rugby gods intervened, ensuring that the injury which ended his career protected his status of having played all his non-international rugby for teams in his native province.
O’Connell played Test rugby until 36. Nobody would bet against Jones, 32 next month, lasting that long in which event it would be but a matter of time before he overtakes Richie McCaw’s 149 Tests as the most-capped player of all.
For all that he has achieved already, Jones will not lose sight of his basic ambition to put Ospreys back on top of the extended PRO14 heap, an ambition heightened by the somewhat galling fact of that particular roost being ruled by the neighbouring Scarlets.
Jones would probably never claim to be everyone’s cup of tea. In his Mr Prickly persona, he can be an awkward interviewee even when bowled questions of the long-hop variety, but none of that matters in the grand scheme of things.
The Ospreys have made this his benefit season, rightly so because no matter how much they pay him, and it will be rather less than Neymar’s £775,000-a-week, Jones has been worth every penny. His priority will be to ensure the season benefits others and that the Ospreys benefit most of all.