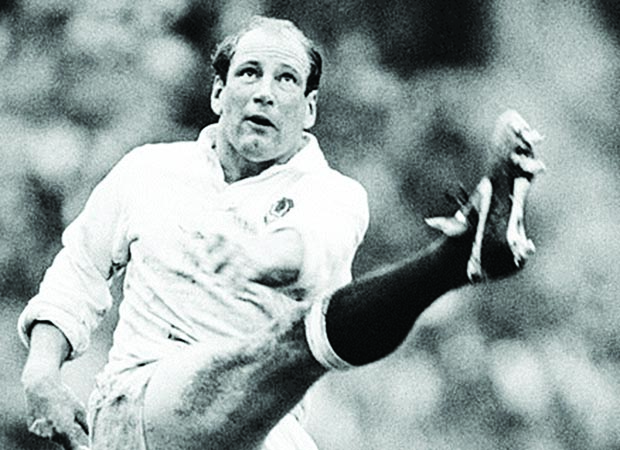 Had everything gone the way he and others planned it, Dusty Hare would never have played rugby for England. He would have captained Nottinghamshire County Cricket Club instead.
The presidium at Trent Bridge during the early Seventies thought so highly of the local boy’s tactical acumen that they put him in charge of their Second XI at the age of 20.  The previous year he had played in the same England schools’ team as a lad called Graham Gooch.
That Hare had been a rugby player, first and foremost, who happened to play a bit of cricket had always been taken as gospel. It was supposed to have been the other way round and now, before he bows out of full-time employment as Northampton’s Academy manager next month, the record can be put straight.
“I left school to be a professional cricketer, not a rugby player,” he says. “I played rugby for enjoyment when there wasn’t any cricket. I was lucky at Notts because shortly after joining the staff they saw me as a future captain and that if it went well I’d get my chance in the first team.”
The first chance, as luck would have it, emerged during a wet mid-summer’s afternoon in Glastonbury.  Somerset had Notts in trouble at 89-5 when the new boy walked out at No.7 to join probably the greatest all-rounder since the Second World War – Garry Sobers.
“He was a lovely guy and always very good with younger players. When I got to the wicket, he came down and said, ‘just play your normal game’. It was wet and the ball was moving around – not easy.”
Wisden records Hare’s dismissal at the hands of an England bowler, Tom Cartwright: lbw 3. “The umpire gave me out leg before but I wasn’t leg before.   I’d been hanging around for bit and the umpire thought it was time for me to go.”
The second chance presented itself in the next match, Yorkshire at Bradford where Hare spent hour after hour witnessing an object lesson in crease occupation by the master of the art, Geoffrey Boycott.
“It was another uncovered wicket and not even Garry Sobers could get him out. Garry was outstanding that day but then so was Boycott. He only had three shots but nobody could shift him. When it came to my turn to bat I found out for myself how difficult it was. I took more than a few blows to the body.”
For the record, Yorkshire almost doubled their first innings total from 111-9 to 219. Boycott made 129 of them and then only because he contrived to do the job for the bowlers by running himself out. Hare licked his wounds and went back to the seconds.
He had still to work his way through a testing apprenticeship towards the end of the following winter when England put him on the fastest of tracks to Twickenham. It turned out to be a classic sporting version of the tortoise and the Hare.
A season of prodigious goalkicking at Nottingham had brought him to the notice of the national selectors during the 1974 Five Nations tournament when they picked three different full-backs in as many matches – Peter Rossborough against Ireland, Tony Jorden against France, Hare against Wales.
As if that didn’t say enough about the haphazard nature of England’s selection, the fate of their newest full-back did. Choosing a goalkicking specialist when they already had one in Alan Old meant Hare was obliged to kick only out of hand, not off the ground.
He made a winning start, a 16-12 home win denying Wales the Championship albeit amid one of the more unusual controversies between the countries in that the subject matter, the non-playing of the Welsh national anthem, got an airing in the House of Commons the following Monday.
Had England lost, given the perverse behaviour of the selectors, Hare might well have found himself there to stay. Instead, despite the win, they dropped him and didn’t pick him again for four years. He didn’t need that long to realise that a serious shortage of runs would abort the grand Notts plan for their next captain.
“It didn’t work out because I wasn’t good enough, simple as that,” he said.   “I was still on the Notts staff in 1974 but by then I’d got an England cap. I’d got the taste of international rugby.
“At that time it was quite easy to combine both sports. The rugby season finished at the end of April, the cricket season in the first week of September at the latest. But all that changed from the late Seventies with annual tours and the general spread of the season.”
There was just enough time for another all-rounder to emulate Hare by playing full-back for England and county cricket – Alastair Hignell. His 11 centuries during nine years as a middle order batsman at Gloucestershire included one against the West Indies in 1976.
How the course of history would have changed had Hare made runs on a similar scale. He would have succeeded the retired Sobers and been in charge when Richard Hadlee and Clive Rice began their record-breaking double act in the late Seventies.
At the risk of sounding sacrilegious, Hare would never have joined Leicester Tigers but then here was a player destined to deal in big numbers.
A case of the right man, wrong sport as the figures for first-class matches prove in striking symmetry – 7,191 points, 7,020 fewer runs.