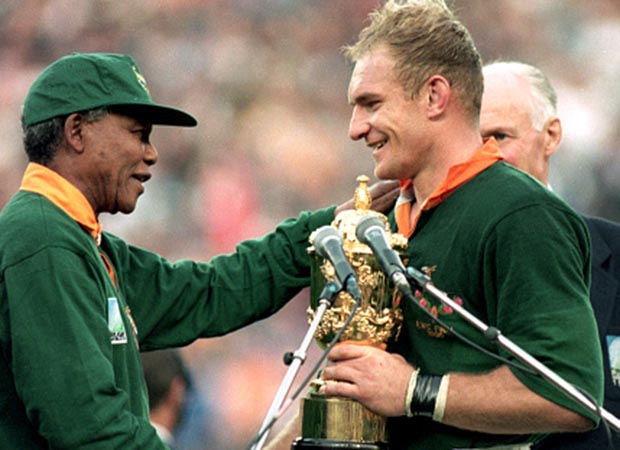 There is an old adage in journalism that news is not necessarily when it happens but when someone digs it out. Applying that principle to this column clears the way for breaking news on the World Cup front concerning the most outspoken of all the game’s British power-brokers, John Jeavons-Fellows.
It matters not that the World Cup in question took place 22 years ago, nor that South Africa won it at the first attempt but that the fearless RFU member for North Midlands threatened to disqualify the Springboks minutes before their semi-final against France.
Now it takes some nerve to warn the host nation they will be given the order of the boot unless they toe the line.     The Boks had made the cardinal sin of getting shirty with the wrong chap, one who never shied from speaking his mind, mostly for the better, occasionally for the worse.
Anyone who knew ‘JJF’, above, then a strident voice on the International Rugby Board as one of two RFU delegates, will not be surprised that he had the courage to let South Africa know that he was ready to throw the book at them.
The tournament organisers sent him to King’s Park to ensure that the rules were obeyed and that nobody pulled a fast one. In that respect, Francois
Pienaar and his Boks found a formidable Englishman blocking what many considered their pre-destined path to the final the following week.
The former Stourbridge prop gave them both barrels over the state of their jerseys. Tensions had been running high all day amid fears that a cloudburst would leave the water-logged pitch in no fit state for any game, let alone a World Cup semi-final.
An abandonment meant France would have walked into the final by virtue of a superior disciplinary record. Their chef de mission Marcel Martin, then one of the World Cup’s most senior figures, wanted the match called off, citing the surface water as a danger.
Louis Luyt, never slow to throw his considerable weight about as the dictatorial head of the Springboks, interrupted a conversation between Martin and the referee, Welshman Derek Bevan. A stand-up row ended with Luyt ordering the French official from the field.
The Springboks had to get the game on. No sooner had Bevan given the green light after a frantic mop-up operation by a battalion of Zulu women than Jeavons-Fellows was refusing to let the home team leave the dressing room.
Because it never rains in Durban in June, they had cut the sleeves of their jerseys in readiness for blue skies and high temperatures. The rain dictated that they needed long-sleeved jerseys and the only set available did not have the right numbers.
“Jeavons-Fellows appeared at the Springbok locker-room to inform us that no one would be allowed to go onto the field with any other number but the number against their names in the official programme,” Luyt said years later.    “He was simply enforcing the regulations that players had to be properly numbered.
“Morne du Plessis (South Africa’s team manager) balked. He was not going to tell the players to change jerseys once again after all that they had been through. In that case, Jeavons-
Fellows warned, South Africa would be disqualified.
“I stepped in and told Morne that we had no option. He went back into the locker room. ‘Sorry, boys, we have to comply,’ he said. There were murmurs but they made the switch back to their original jerseys.”
England’s feisty bulldog and the overweight, overbearing Johannesburg tycoon had another run-in later that summer, in Paris on the last weekend of August. Jeavons-Fellows had been mandated by the King Canutes at Twickenham to vote against the onset of professionalism.
What Luyt said at that historic IRB conference made the ever-pragmatic Worcestershire businessman defy the party line and vote for an open game.  His Afrikaaner adversary left him no choice.
Invited to speak first by the then IRB chairman, the visionary Welsh QC Vernon Pugh, Luyt said: “I am here today, Mr Chairman, to declare SARFU and South African rugby as professionals to your organisation.”
He then asked delegates from the seven other foundation members in turn whether they paid their players.    Several mealy-mouthed mumblings were enough for Luyt to boast that he had exposed the hypocrisy of shamateurism.
While some at the RFU, most notably the outgoing secretary Dudley Wood, refused to recognise the inevitability of professionalism, Jeavons-Fellows grasped the reality. He was that rare breed in rugby political circles, an opinionated figure ever-ready to speak his mind publicly on the issues of the day.
Despite being mired in the RFU’s internecine political warfare fuelled by Cliff Brittle’s divisive chairmanship, Jeavons-Fellows never lost sight of the bigger picture. A major architect of the League system, he, more than anyone, created annual matches against the Southern Hemisphere, convinced that England would never win the World Cup without regular exposure to the big three.
How right he was but there were also times when he made serious errors of judgement.  Anglo-French monopoly of the Five Nations during the Nineties prompted him to expound the idea of the big two playing their reserve teams while the first XV fried bigger fish south of the Equator.  Understandably, the Celts never forgave him.
If grubby politics cost him the presidency of the RFU, JJF would have shrugged it off as the price for speaking his mind.  He died last Tuesday at the age of 78 and it would be fair to say that in the event of a life hereafter, he will not be found in the diplomatic corps.