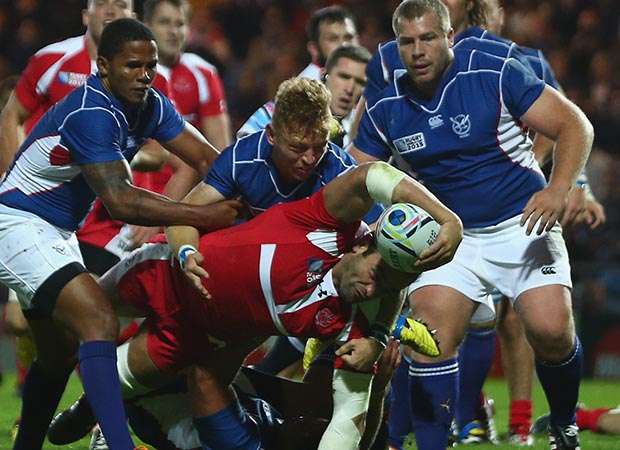 Georgia might have been mobbed at Tbilisi airport at some ungodly hour on their return from RWC2015 and, yes, a week of celebrations and partying did ensue but they have also been very quick to get their noses back to the grindstone this season in the European Nations Cup.
The success of pre-qualifying for RWC2019 and the widespread recognition of a job well done by Georgia in England has been a big boost, but now is not the time to rest on their laurels. Standards must be improved, not just maintained, if they are to again be competitive at RWC2019 and if they are finally to kick down the doors of prejudice and be allowed a place in the Six Nations.
Unlike those at the foot of the Six Nations, if ever Georgia have a bad season they will be relegated, there is no comfort zone for them.
The Lelos, who have lost just three European Nations Cup games in the last ten years, have kicked off this year’s tournament with wins over Germany (59-7), Portugal (29-3) and Spain (38-7) but the real tests come in the next fortnight when they play Russia in Sochi and entertain a strong Romania side in Tbilisi at the National Stadium, a match which is already sold out.
“The World Cup was wonderful but it’s brought a bit of of extra pressure which has taken some getting used to,” admits the Lelos New Zealand coach Milton Haig, below. “There is a lot of expectation from fans, stakeholders and the government who have made a big commitment to the game so it has been important this season to maintain momentum.
“Some observers thought we would immediately be looking to experiment and throw the youngsters in with a view to RWC2019 but I’ve always come from the school that says you must earn the shirt. And probably the worst thing that could happen for Georgian rugby now was if an experimental XV started losing a couple of games that perhaps we should have won. The Lelos fans wouldn’t be thrilled with that.”
So, other than one or two injuries and unavailabilities, Georgia have been picking from merit although, as it happens, a couple of very good youngsters have forced their way into the team.
Giorgi Melikidze is a 19-year-old prop at Stade Francais where he still plays for their junior team but is a real talent, while Beka Gorgadze has been going well in the backrow for Stade Montois in the Pro D2 and has earned a run. Already in the starting Georgian XV, of course, is Vasil Lobzhanidze, just turned 19, and one of the best young scrum-halves on display at RWC2015.
“Once we have completed this year’s European Nations campaign my plan is to use the next couple of years to expand our style of play a little,” continues Haig. “We are very well aware that to compete against the very best we need to pose a bigger threat in the wide channels and offer more of an attacking threat in our backs.
“We can get there but it won’t happen overnight. The Pumas are our model on this, the standard bearers for how a T2 nation can develop into a T1 nation. They first built up a reputation for been competitive off the back of their strong forward play which earned them a place at top table and meant nobody took them for granted.
“And then, by using their academies and getting their Junior World Cup teams to play a different brand of rugby, they have produced an enhanced pool of players capable of playing all sorts and hitting you from every direction.
“That’s what we aspire to. We can’t replicate their approach exactly – we don’t have Argentina’s nationwide academies and playing numbers – but we can adapt their template.” 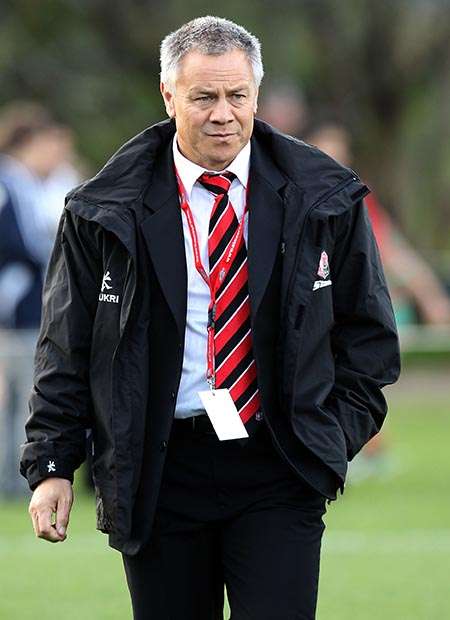 What Georgia do currently have is an exceptional U20 age group, spearheaded by Lobzhanidze, which is timely because they will be staging JWC2017 in Tbilisi next summer, possibly the biggest rugby event in Georgia’s history. Although pre-qualified as hosts, Haig has set his team of ‘qualifying’ anyway from this year’s Junior World Cup in Manchester.
“Having drawn New Zealand, Wales and Ireland in our pool that’s not going to be easy but we have a talented group of players and I believe they can place well and give us a launching pad into the 2017 tournament.
“With that in mind we have sent a large training squad over to Argentina and Uruguay, right now, to put in some hard yards and also play four games down there. The party is short of some of its more established players who are back here playing in the European Nations and we decided to leave a few others in France where they are getting plenty of quality game time, but it is still a strong party and they are learning every day.
“This kind of tour is a huge investment of resources from the Georgian Union but that’s the kind of ambition and forward planning we need now from this point onwards. In the two years leading into RWC2015 every dollar, every man hour, every thought had to be directed towards the national team and the tournament. We didn’t have the luxury of trying to change structures and blue sky thinking.
“But now we can try and get a few things put in place. The national team always take priority but we can also really focus on the juniors and we might have another look at using Sevens to identify some encouraging backs and backrow forwards.
“Again it’s clear that a good proportion of the Pumas backs played a season on the Sevens circuit as part of their pathway. It could be a good strategy for us but we need to examine exactly how it will benefit us and if we can fund such a project properly.”
Haig’s practical Kiwi streak is serving Georgia well. He’s ambitious but realistic and appreciates that in rugby, above all games, you need to have the basics in place at times. His approach to RWC2015 was completely free of sentiment, grounded on what Georgia were capable of achieving rather than what they dreamed might happen.
“In terms of the actual rugby Georgia played at RWC2015, we probably didn’t develop or evolve much. The World Cup wasn’t the time for us to experiment and bring in radical changes. Yes, we learned to win important high pressure games against unfamiliar opposition, we improved our world ranking, earned much respect and delighted many people at home and all that was great.
“But make no mistake we travelled to England on a well-defined mission. To start at 100 per cent and to win the first game, against Tonga (17-10). And then to manage out ‘talent’ and end with a win in our last game, against Namibia (17-16). By doing that we could secure our qualification for 2019. And the way to achieve all that was to maximise our forward power. Keep doing the things we do well.
“And we must still keep doing those things well, only from this point onwards we need to start doing all the other things better.”