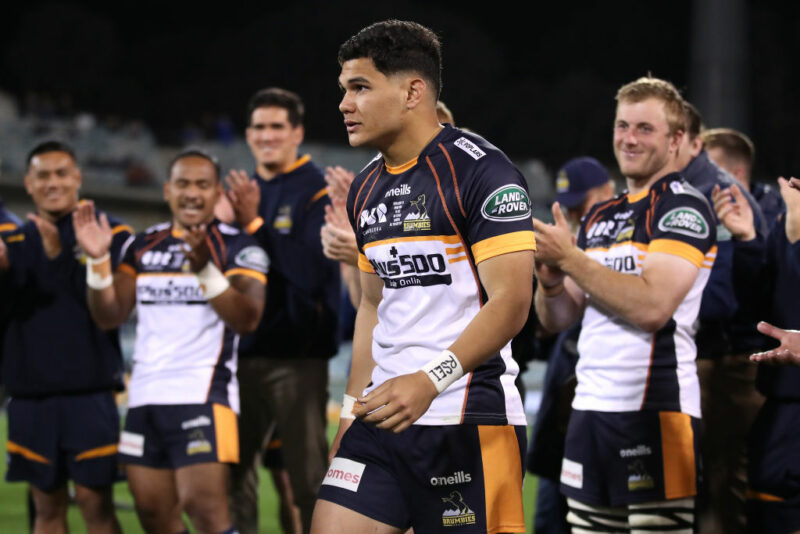 Victory in front of a home crowd in Canberra ended the Brumbies 16-year title drought that extended back to their Super Rugby final triumph over the Crusaders.

Led by 20-year-old playmaker Noah Lolesio, the hosts established their authority early on through their ever-reliable lineout-maul built by head coach Dan McKellar – the man who turned down Dave Rennie’s invitation to become his forwards coach at the Wallabies.

After penalties for Lolesio and James O’Connor put points on the board for both teams, the Brumbies gained field position with a lineout five metres out where hooker Folau Fainga’a threw to the front and rejoined the maul to dive over the line.

On 27 minutes Lolesio showcased the talents that could earn him the Wallabies No.10 shirt, drawing in two defenders before producing an offload to winger Andy Muirhead who danced to the line.

The Reds responded before half-time with O’Connor scooping a loose ball to Jordan Petaia who evaded multiple Brumbies defenders to set up No.8 Harry Wilson for a simple try, converted by O’Connor who also added a penalty.

Leading 15-13, the Brumbies extended their advantage with some slick backline passing creating space for Tom Banks to score.

Lolesio followed up a successful conversion kick by slotting a drop-goal and penalty kick as the game reached the hour mark with the Brumbies up 28-13.

The Reds fought back with an O’Connor penalty and converted Angus Blyth try to set up a tense final 15 minutes. But the Brumbies held firm in defence to lock up the victory.

“Credit to the Brumbies, they got the result and that’s fantastic for them and their home crowd there,” Reds head coach Brad Thorn said.

“We’re obviously disappointed, we came down here to get a job done and we came close.”

McKellar credited Lolesio, saying: “He was one of our best players and there were a lot of other players that stood up as well.”