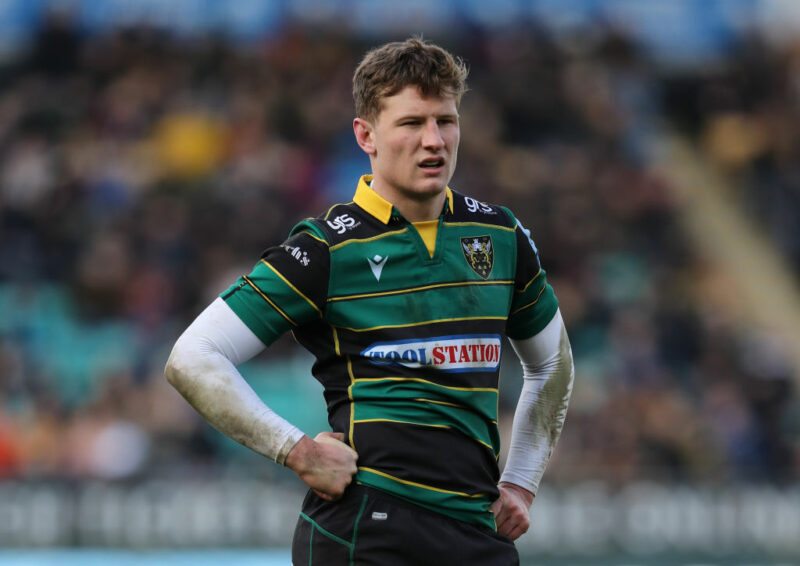 Centre Fraser Dingwall credits the impact of Northampton’s highly-rated backs coach Sam Vesty for taking him to the brink of a first England cap.

Former England U20s star Dingwall, 21, earned a shock Six Nations call-up in January and, on the back of a fulfilling experience, is determined to take the next step as Saints prepare to resume their title charge ahead of the Autumn Internationals.

Having pitted his wits in training alongside Red Rose midfield regulars Owen Farrell, Henry Slade and Manu Tuilagi earlier this year, Dingwall told The Rugby Paper: “It gave me a marker of the level it takes and it’s something I’m working towards.

“It’s my goal and by setting out and seeing what goes into a week with England and how hard those players train, what they put into it, the skill level, mental strength and everything that goes with it, it’s something you constantly strive towards.

“I’m just trying to soak up as much as possible, and I can do that at Saints as well, with the players we’ve got like Rory Hutchinson, Piers Francis, and Matt Proctor – all internationals themselves, so it’s a very strong midfield group at the club.

“We all bring something different so it means you learn off each other and push the boundaries and hopefully I’m putting my hand up.”

Dingwall has the perfect mentor in Vesty, a former high-class utility back with Leicester and Bath who has made an impressive mark in coaching.

“I would say he’s definitely one of the best coaches I’ve had in the sense of how he can break down something extremely quickly, make it clear what went well and what didn’t and what the easy fixes are to get the answers,” Dingwall added.

“He puts massive emphasis on small skills and doing things very well that lead you to the end result, and that’s something he’s helped me with massively in finding ways to get better in training rather than simply doing a skill over and over. He puts pressure on you in different ways so that you increase your level and that’s something he promotes through the whole squad.

“He’s had a massive effect at Northampton and you can probably see that in our game.”

Saints will renew hostilities in fourth place against Wasps on Sunday and Dingwall believes they have the squad to maintain a play-off place.

He said: “It’ll be interesting to see what squads look like, especially with players jumping about and new signings coming in and what impact they will have on various teams, but we’re in a very good place and have a deep enough squad.

“We’ll be able to rotate well, especially over the Saturday-Wednesday-Saturday blocks, and hopefully that will enable us to stay fresh enough to perform.

“We’re in a fortunate spot where this is pretty much like the start of a new season but we’ve already got a head-start being near the top of the table.

“We look back on a few results like Bristol and London Irish at home where we had those games in the bag and let them slip away, so that frustrates us. But we know what we’re capable of and if we perform how we can, we can beat anybody.

“Our attacking game illustrates that so hopefully we can come back hard against Wasps next week and really kick-on towards the play-offs.”

Dingwall’s ultimate aim to is to be back on England duty come late October for another shot at challenging the likes of Manu Tuilagi.

He added: “Manu’s a lovely guy and he’s very approachable. He’s always willing to pass on his experience and he’s got a lot of them, so I definitely had a few good chats with him and he passes down lots of information to younger guys.

“Since lockdown we’ve had various zoom calls as the outside backs, which Simon Amor has mainly run, and we’ve looked at areas that as a squad we could improve from the Six Nations, so they’ve been really good to be involved in as well.

“The whole England experience has been very valuable and it’s something I’m constantly trying to reflect on and take what I can from it.

“I’m not getting ahead of myself, I know I was in the Six Nations squad to be looked at, hopefully as a long-term option, but to be involved and get that recognition was massive and I’ve tried to take as much as I can from the environment.”