I don’t plan to be a two-cap England wonder, says George Furbank 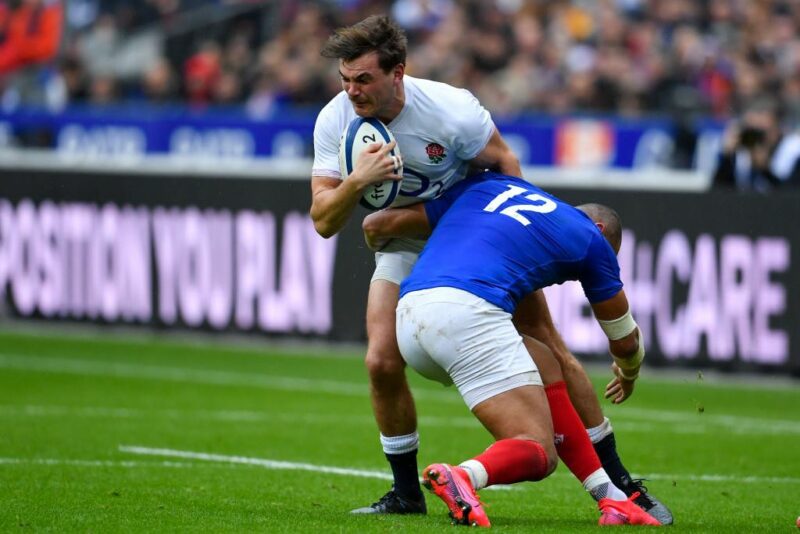 With the groin strain that curtailed his Six Nations fully healed, England and Northampton full-back George Furbank is desperate to re-establish his Test credentials.

Furbank has used lockdown to take in the enormity of his international baptism while getting his body right.

The result is a fired-up individual who knows he must overcome stiff competition in his own club before adding to the caps he won against France and Scotland.

Furbank, who has not played since enduring the Murrayfield monsoon on February 8, told The Rugby Paper: “It’s been great to be out training with the boys at Saints again, throwing a ball about and doing some serious running.

“It was an overload injury in my groin that flared-up in the Ireland Test week, so these last few months have been really good to give that a reset and do some strength work.

“I did it originally during our first Treviso week in Europe and was managing it, but I feel like I’m on top of it now and hope it stays that way when the loading increases.”

Although nearly five months have elapsed since his Test debut in Paris, Furbank, 23, admits his ascension from club player to full international still feels surreal. However, that has only hardened his determination to press for further honours.

Furbank explained: “It was a dream and even now when we’ve been doing video messages with people during lockdown and they introduce me as ‘England and Saints full-back George Furbank,’ I still find that really weird.

“It will take some time to get used to and it was an unbelievable experience, but I don’t want to be that person who’s had one good season at Saints, gets two caps and then does nothing else.

“I’ve got bigger ambitions and I really want to put my foot down again. I hope that will put me back into England contention, which is what I’ve got my mind set on, and Chris Boyd, our director of rugby, is very good at ensuring people’s feet are kept firmly on the ground.

“Both Chris and (attack coach) Sam Vesty want the guys who’ve been with England to bring what we’ve learned back to Saints so we can be even bigger voices and be more confident as players slipping into leadership roles.”

While Elliot Daly and Anthony Watson provide formidable barriers to his England ambitions, the battle for the No 15 jersey at Saints is no less intense with Harry Mallinder, over his ACL injury, Ahsee Tuala and young gun Tommy Freeman all vying.

“I love that competition, to be honest,” Furbank adds. “I roomed with Elliot for a couple of nights on England duty and he really helped me settle in, while the others are class players as well, so it’s no different to your club where the competition is very high.

“There’s Harry, ‘Ace’ (Tuala) and Tommy but that’s exciting because you know that you’ve got to be at your best to have that No.15 shirt.

“I don’t want to speak for Harry, but we’re both excited that we’re in this position. He was in good form prior to the break so hopefully we can make selection difficult for Boydy.”

Assuming Furbank picks up the baton again quickly and is in a position to win his third cap this autumn, he will be better prepared for the step up in class. He said: “On the pitch, it’s the whole intensity of international rugby and the tactical side around the kicking game and how important that is which shocks you.

“There’s a much greater emphasis on the tactical side than at club level – and then off the pitch, whereas when you’re playing for Northampton you might just have the local paper talking about you a little bit, suddenly it’s the whole country scrutinising you.

“It’s a bigger platform, a bigger stage and even my dad got interviewed.

“I wasn’t expecting that and I don’t think he was either. When you’re with England the whole thing broadens.”

Furbank added: “I’ll be better prepared now and although I haven’t heard too much from Eddie Jones since the lockdown, we’ve had Zoom calls every few weeks with Simon Amor, England’s attack coach, and the other outside backs to discuss quite a few things.

“We’ve gone through video clips looking for ways we can improve and it’s been great to try and keep pace with everything that’s been going on and learn a bit more about how England want to play when we get back.

“Simon’s had a good impact and has brought a bit of flair from 7s, so that’s enabling me to build on what I’ve learnt at Saints under Sam Vesty.”