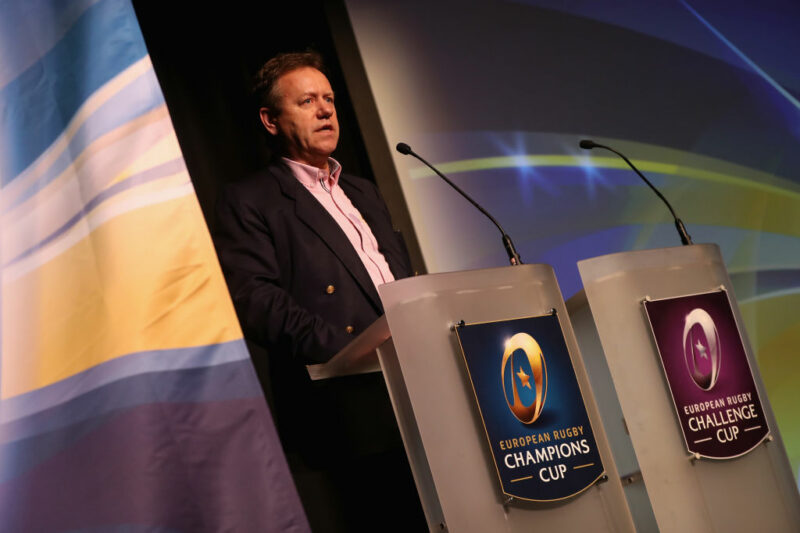 European Club Rugby chairman Simon Halliday has dismissed fears of the Heineken Champions Cup being sacrificed on the altar of Bernard Laporte’s call for it to be superseded by a world club championship.

Responding to a proposal from the French president which would effectively end Europe’s supreme club event, Halliday said: “That is not going to happen. There is no logic in what Bernard is suggesting.

“The Champions Cup will continue and once every four years the latter stages will provide the basis to create a global tournament involving the top eight teams from each hemisphere.’

Laporte, who condemned the Heineken Cup for its failure to generate enough money, is to present a detailed report to World Rugby. Halliday, England’s right wing during the 1991 World Cup final against Australia, makes it clear that the tournament will continue to be run by the clubs, not the governing body.

“Why would a club tournament be run by anyone other than the clubs?” he said. “Between us, we run about seven different competitions. We know World Rugby have looked at it (the World Club Cup) and that they have set up a working party. The whole game needs to be looked at. I thought we were trying to de-conflict and reduce overlaps.’’

Laporte had called for a World Club Cup to be played for annually, an idea which has since been rejected by the Top 14 French clubs.

“Could it happen every year?’’ Halliday said. “No.

“Can it be run by World Rugby? No.

“Huge numbers are being lost. We need to bring this to fruition as soon as possible. The first year it can happen is 2022. Why not?

“All of the clubs of Europe and all of the unions of Europe will be signatories to the new global championship. LNR, PRL, PRO14 and the six unions are signed up until 2022.

“We are working on a new heads of agreement to run for the next four years at least, if not the next eight.

“Our intention is to more than double revenue. We are discussing a model which will suit everybody. We understand the value of this competition to the world calendar.

“Nobody is going to claim that commercially we have done what we wanted to. There are a variety of reasons for that but there is a new initiative to take this to a completely different level.

“This is not about giving a massive cheque to one club but ensuring that the whole club game benefits. We are negotiating the next cycle and the French clubs have stated on numerous occasions how committed they are to Europe.”

The Champions Cup and Challenge Cup postponed from last April is due to restart with the quarter-finals in September with the final the following month in Marseilles. Organisers may opt for an alternative venue should none of the three French contenders – Toulouse, Clermont, Racing – go all the way.

The French Government’s refusal to allow crowds of above 5,000 at sporting events may change before the Top 14 starts on September 4.

If not, EPCR will have no option but to take their final elsewhere.