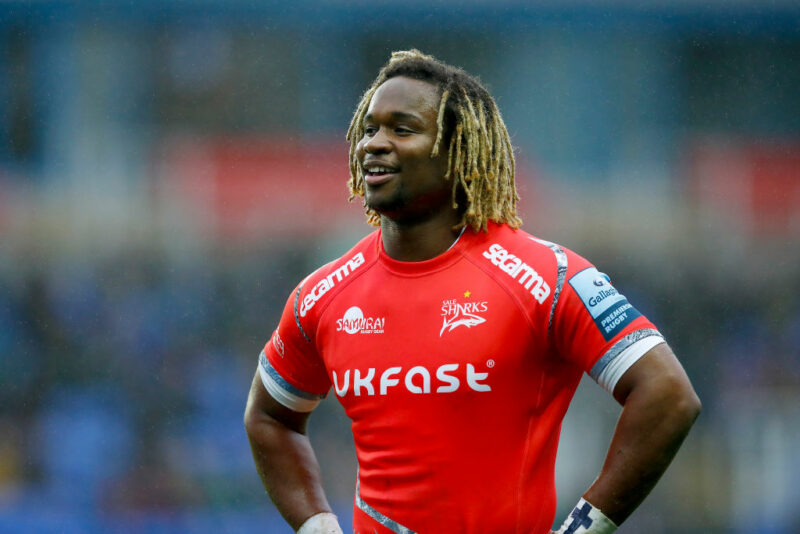 WITH a new contract signed and sealed, Marland Yarde is looking forward to picking up where he left off at Sale Sharks and potentially staying on at the north’s premier club well into his 30s.

Speaking exclusively to The Rugby Paper, the 28-year-old rubbished claims that he ever contemplated a move away from the Premiership’s second-placed team and insists there was never any prospect of a Jonny May swap deal.

“I’d just like to clarify, at no stage have I ever been in any negotiations with Leicester or Wasps. I don’t know where they got their stories that there was swap deal with Jonny May and me,” he said.

“Over the last six months I’ve been in negotiations about a new contract here and I’ve never entertained a move to another Premiership club away from Sale throughout that time.

“I actually signed the contract way back in March/April. It’s a one-year deal but, essentially, it’s a three-year deal because, in January, I have the ability to trigger a further two years.”

Yarde is confident he can be part of something special at the AJ Bell Stadium.

“I think we have the ability to achieve something great at this club. We’ve made no bones about it, we want to challenge for the title, but only 60 per cent of the games have been completed so we have got a long way to go.

“Teams that are going to finish in the top four are the teams who are the most prepared post this break. Our focus now is just to make sure we are as best prepared as we can be so that when the games begin again, we can pick up where we left off.”

Yarde joined the Sharks midway through the 2017-18 season on a three-year deal and his time in the North West started encouragingly until a major knee injury led to a year out.

The 13-cap winger returned to action last October and worked his way back into form, scoring four tries – including a hat-trick against Leicester – in his last three appearances before the break for COVID-19.

“My first year or so was brilliant, I felt I was playing my best rugby, and then the injury happened,” he said.

“The first couple of months after my recovery were difficult, I probably didn’t kick on as fast as I’d have liked, but I think in the last two months before this coronavirus started, I was getting back in the groove and showing everyone what I could do again.”

A QPR fan, Yarde watched with interest as the Premier League returned in midweek.

Players from all Premiers League teams have taken a knee in support of the Black Lives Matter movement before kick-off.

Yarde, who was born in St Lucia before moving to England as a youngster, says he’d like to see that replicated in rugby when the season resumes.

“I’ve experienced racism throughout my childhood in games, and I experienced it on my England debut (in 2013) in Argentina. There were monkey noises and abusive tweets post-game,” he revealed.

“It is not as frequent an occurrence in rugby as it is in football, but it is something I’ve experienced two or three times throughout my career, and it is something that definitely needs to be addressed.”

Yarde admits he has pulled back in the past from taking a more prominent stance against racism, but that attitude is now changing as the BLM movement gathers momentum.

“I’ve been guilty of being ignorant in terms of feeling that it is a losing battle sometimes, and turning a blind eye,” he said. “You see documentaries where you’ve got white supremacy and all that sort of stuff. It turns my stomach sometimes when people are adamant that one race is superior to another.

“Another reason I was not too vocal in the past is because people can make out you are trying to play the victim. But now I do feel I need to embrace it more.”

Yarde added: “It is atrocious that people are losing their lives over the colour of their skin. That is really upsetting to see being a black person.

“But it is great to see people of all different cultures and races actually supporting the Black Lives Matter movement.

“Although there is still that minority that will continue to be ignorant to the fact we are all equal.”