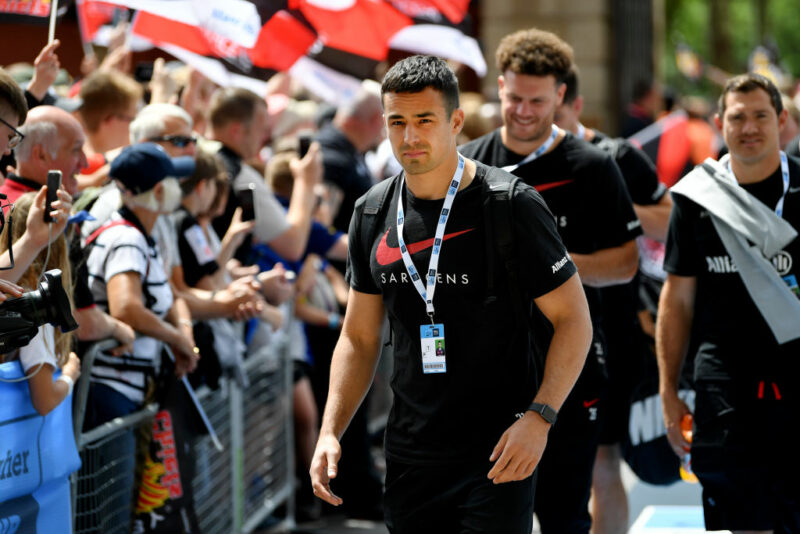 ALEX LOZOWSKI is looking to follow the lead of Chris Ashton and regain his England place once his spell in France is over.

The centre, who turns 27 in a fortnight, has joined Top 14 outfit Montpellier on loan for the 2020/21 season after signing a new two-year deal with Saracens.

Lozowski’s decision to cross the Channel makes him unavailable for national team selection under current RFU home-based player rules, but the Londoner hopes to be able to add to his five caps when he returns next summer.

Ashton found himself in international exile but worked his way back into favour after swapping Toulon for Sale, winning five caps during his time with the Sharks.

Lozowski said: “I’ve looked at the likes of Chris Ashton, who went away to France and played really well and came back and played for England.

“Hopefully if I can do that for Montpellier, I’ll put myself in a position to be pushing again for England when I get back. I still have huge ambitions on that front and in club rugby with Saracens.”

Lozowski revealed that passing up on the chance to play for England for at least one season was the only option available to him.

“First, I’m really happy to have secured my future with Saracens, which is what I wanted the most. I regard it as my club now, and I can’t really see myself playing for any other team in England,” he said.

“It was always a case of finding a solution for the coming season, where I can play in a top division against top players, for the sake of my career.

“Coming by one-year loan deals were difficult, there weren’t actually any in England for me, so I started looking abroad even with everything that comes with that in terms of playing for England.

“There were a few clubs that probably would have taken me on a permanent deal with two or three-year contracts, but I was always looking for one season away on loan so that I could come back to Sarries.

“I guess it’s something that I probably didn’t see myself doing at the age I’m at but I’m going to throw myself into it and enjoy it. To find somewhere to play for a season, with a club as good as Montpellier, is a great result.”

The former Wasps and Leeds man also revealed the current COVID-19 situation played a part in his decision-making.

“France are ahead of the game in terms of getting their season started compared to the Premiership, so that is something I thought about as well. I just want to play rugby as soon as possible.

Montpellier’s pre-season starts on July 1, the day after his birthday and Lozowski is keen to catch up with Springbok fly-half Handre Pollard in person.

“I’ve chatted to him a little bit on the phone about Montpellier and how things are going there and what a great place it is,” he said.

“To be playing in a team with the likes of him and Cobus Reinach is really exciting.

“They’ve got a lot of good players, Jan Serfontein is a great player in midfield, Arthur Vincent is another really good young French player in midfield as well, and then there’s Anthony Bouthier, the France full-back, and Vincent Rattez on the wing. It looks like a really good back line and, hopefully, I can fit in well and contribute.”

A season on the Mediterranean coast is not a bad way for Lozowski to while away the time while his team-mates slug it out in the Championship.

And the classy footballer is confident they can get the job done and secure promotion back to the Premiership.

“But I have faith and belief in the lads, and the squad that we’ve got, to do really well and come straight back up.”