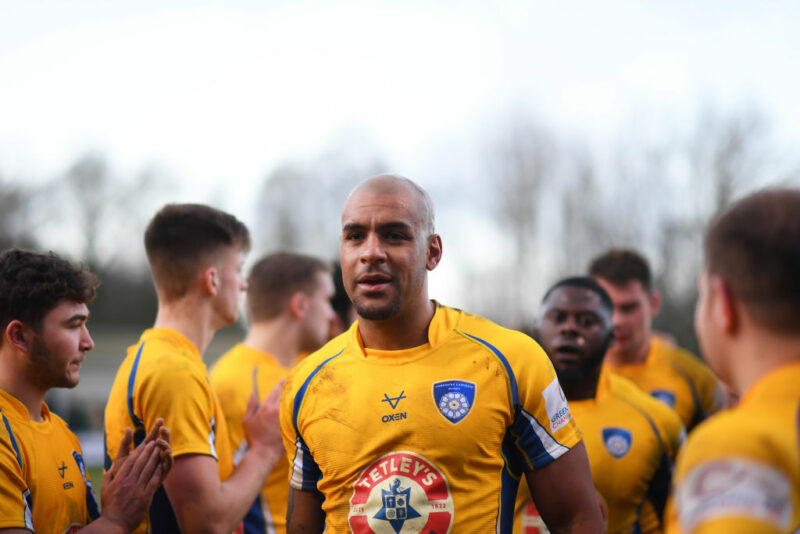 DURING 15 years as a professional Tom Varndell has helped himself to more ‘meat pies’ than panic-buyers at Morrison’s.

Still the Premiership’s record try-scorer with 92 from 180 appearances, primarily from spells at Leicester and Wasps – two of the most successful clubs in the modern era – the 34-year-old looks to have played his last game.

While not officially retired, it would be a surprise if Varndell opted to carry on playing alongside his role as a client manager with Elite Sports Management, given the trials and tribulations of this season at Yorkshire Carnegie, the Championship’s punch-drunk cellar dwellers.

If so, a 73-26 home defeat against London Scottish earlier this month was certainly not the fairytale ending the speedster would have imagined when he first started terrorising Premiership defences with the Tigers back in 2004/05.

“It was a spanking but if it was my last game, I’m happy I finished off with a try,” he told TRP.

“It wasn’t the way I wanted to sign off and it is definitely not how I started my career, but you just have to go with it.

“I’ll look back at the positives I’ve had throughout my career and the friendships I’ve made. It’s been good fun, and we’ll have to see what happens next.”

In November 2004, in only his second appearance with the Tigers senior side, Varndell recorded the fastest hat-trick of tries in Premiership history, doing so in a 13-minute span against Worcester.

He continued to leave opponents in his wake and went on to win four England caps, scoring three tries.

The Premiership record, held by Mark Cueto was broken while playing for Bristol, in February 2017, but by then his best days were behind him.

“I had six seasons at Leicester – seven if you include the second stint I had – seven seasons at Wasps, and I would’ve stayed there longer but I had a young family and the West Country was very appealing and I went for it,” he pointed out.

“I left Bristol after they were promoted to the Premiership because I wanted to try something different, so I went over to France but I did not like France, at all. The rugby was not for me, the lifestyle was not for me, and my family were miserable.

“It may feel like I’ve been at hundreds of clubs, but I had two very long stints at two very successful clubs.

“The last couple of years have been more about life experience and seeing a bit more of the world. I think it was good for me, even though things didn’t always work out how I’d have hoped, and good for my next chapter because going into a sports agency I wanted to get a full spectrum of what it was like being at different clubs and being in different environments. It’s going to stand me in good stead for the various relationships I’ll have with players all over the world.”

Varndell arrived in France with nowhere to live for the first few weeks and then, when the club did find him a flat, it had no electricity or water. Things never really picked up from there, and he’s determined that players under his wing don’t suffer the same bad experiences.

“One of the reasons I got involved with Elite Sports Management is that their USP is player welfare.

“Being an agent doesn’t just mean tapping into you once every six months or even once every year. It’s about helping with extra training – nutrition and mental health and things like that – or just being on the other end of a phone if the player needs someone to talk to.”

Varndell was ready to call it a day after his Asian adventure but then Carnegie came in for him.

While getting beaten by 50-plus points most weeks has been a chastening experience, Varndell doesn’t have any regrets.

“I love rugby, I absolutely love it. It’s a game I have played since I was eight years old,” he said.

“I’ve played on different types of pitches, from some of the biggest stadiums in the world to places like West Park on a Sunday afternoon. It’s fun scoring tries; I don’t care where I am doing it.

“It has been bloody hard this season; I’m not going to lie, and it hasn’t been exactly how I expected it to be.”

Surrounded by a load of student team-mates at Carnegie and hampered by niggling injuries, Varndell has felt all of his 34 years this past season.

“The majority of the team are 18/19 years old; they’ve got very little experience and are just starting out in their careers. This season, although they have taken an absolute spanking week in, week out, and there’s no hiding behind that, what they’ve gained in experience is going to be massive for them.

“I do believe that a good handful of them will go on to play at another Championship team or the Premiership or even higher.

“Unfortunately for people like myself and Joe Carlisle our best days are behind us. I think Joe’s knees are fused together, and my top end speed has gone. Rugby takes its toll on you. After 15 years of professional rugby, your body is not the same as when you are 18.”