I’ll stay as long as Saracens want me to, says Alex Goode 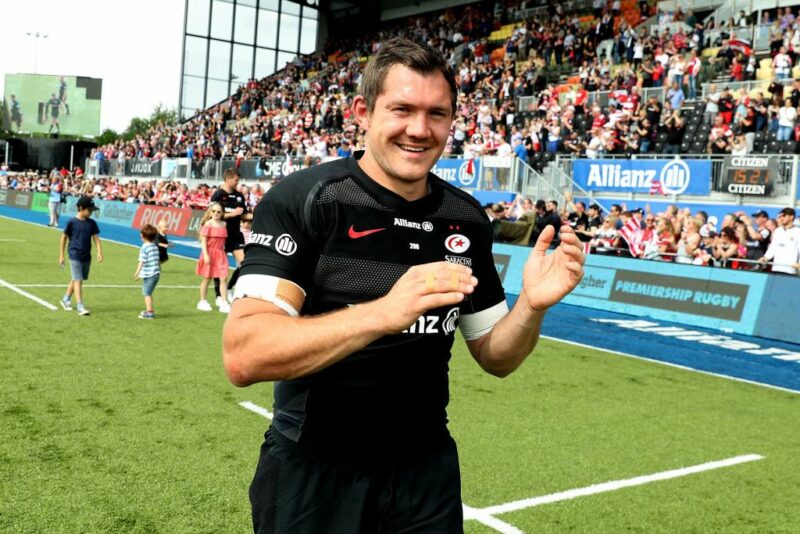 Saracens full-back Alex Goode wants to finish his career at Saracens and has mounted a staunch defence of former owner Nigel Wray, comparing the abuse he has received in the wake of the salary cap scandal to that of a mass-murderer.

Wray cut all ties with the club last month, first resigning as chairman before quitting as a director of Saracens and parent company Premier Team holdings after the club were fined £5.4m, docked 105 points and relegated to the Championship for salary cap abuse over the last three seasons.

Long-time sponsors Allianz are withdrawing their support while players and coaches face an uncertain future. However, Goode told The Rugby Paper: “I’m a professional rugby player and for someone who’s been here for so long, knowing we’ll be playing in the league below is tough to take.

“But it’s also tough to see so much criticism of a man I know and respect in Nigel – it’s a huge shame and no man deserves the level of abuse he’s been getting.

“He’s not a mass-murderer but in today’s world, with social media and everything else, it’s been free license to attack him like one. But for everyone in the club, we understand how much he’s given to Saracens over 25 years of professionalism, so for us we’re thankful to him as an owner.

“That doesn’t change over this and, personally, I’m just sad for him that with all the love he has had, and still has for the club, he has to leave that behind and will no longer be our chairman.”

Having signed a three-year contract extension at the end of last season, Goode is committed to honouring that in the Championship, although he admits he still has international ambitions.

Goode, 31, explained: “As far as I’m concerned, I’ve got two more years at Saracens and I’d like to finish my career here. Whether the club want me here next year or not is up to them to an extent but I love this club, it’s pretty much where I’ve always been and I’d rather stay for the long-term.

“It is tricky at the same time because I’m very competitive. I’m not with England at the moment – I’m not saying that’s right or wrong – but Saracens have always been in semi-finals and finals and competing at the highest level in Europe, so those are massive games that I cherish and not having that next season is something I’m going to have to get to grips with.”

With relegation already assured, the temptation is to dismiss the rest of Saracens’ league campaign as meaningless. However, Goode, recently returned from a pectoral injury, insists the carrot of April’s Champions Cup quarter-final against Leinster ensures the season is anything but dead.

“We’re not here to down tools,” he adds. “Coming back from injury and the fact we’ve got that Champions Cup quarter-final, which is huge for us as it’s what we’re playing for over the rest of the season, means you’re always working towards a common goal.

“I certainly want to keep playing hard and never want to let myself, my family or any of my teammates down. Any time you put the shirt on, guys want to do well.”