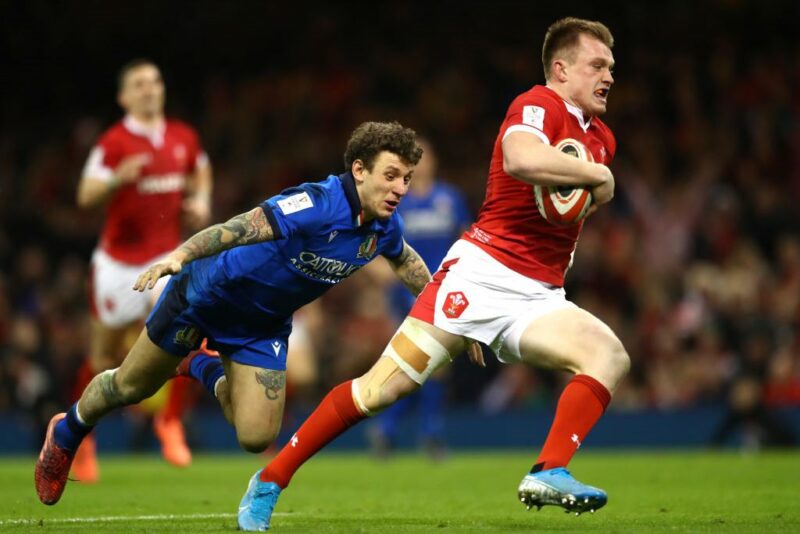 Centre Nick Tompkins will make his first start for Wales against Ireland in Dublin this weekend after impressing on debut.

Scoring a try in the 42-0 win over Italy, the Saracens back has been promoted into the starting line-up for the trip to the Aviva Stadium and will start outside of Hadleigh Parkes.

It means an end to the experiment of George North playing at outside centre, with the Ospreys wing shifting over to his natural position on the right wing in place of Johnny McNicholl.

That is the only change made by Wales head coach Wayne Pivac, who made clear he is keen to see more of Tompkins on the Test stage.

“I thought Nick played very, very well and we think he deserves a chance, so that’s what he’s getting,” Pivac said.

“So George moves out to the wing. We’re also pleased with George’s game. Johnny McNicholl is the one that’s the casualty – he will get an opportunity off the bench.

“Overall we got what we wanted out of the Italy – five points and there was some good play there and some parts of our game need to be looked at, which we’ve done this week.

“Hopefully there will be a marked improvement, so we got what we needed out of the game and now we move forward, keeping that nucleus as it is to help us achieve that.”

Joining McNicholl, a debutant himself last weekend, among the replacements is fully fit scrum-half Gareth Davies.

The 51-cap back has been sidelined with a groin injury and will get his chance to return off the bench with Pivac appearing to hold Tomos Williams as his preferred No.9.

Also making a comeback for Wales is fly-half Owen Williams, chosen as fly-half cover to Dan Biggar over Jarrod Evans.

In the same fixture two years ago, Ireland inched themselves closer to the Grand Slam they would go on to win by beating Wales 37-27 in Dublin.

Announcing his team on Wednesday, Ireland head coach Andy Farrell confirmed Peter O’Mahony would come in for the injured Caelen Doris. This after the Leinster No.8’s debut came to an end early with concussion.

O’Mahony’s inclusion sees man of the match CJ Stander revert to his usual position at the rear of the scrum.

The hand injury picked up by centre Garry Ringrose allows Robbie Henshaw to partner former Connacht teammate Bundee Aki in the midfield, while Conor Murray and Johnny Sexton continue as the half-back pairing.