GEORGE Ford kicked three penalties in the final 25 minutes to haul Leicester over the line and make it four from four to return to the top of the table.

The fly-half, recently omitted from England’s training squad, redeemed himself for one first-half howler by hitting Irish three times and his 78th minute score put the nail in the hosts’ coffin.

This is the first time Leicester have won four games at the start of a league season since 2000-01 when they were led by Martin Johnson and coached by Dean Richards. They won the Premiership and the Heineken Cup that year but on this evidence you wouldn’t be backing this pack of Tigers to do a similar double. If you are having a flutter this season, here are some handy rugby betting tips.

They got home even if Irish, for whom Paddy Jackson at fly-half was a stand-out, are entitled to feel aggrieved not to get more than a bonus point. Irish have not won a league game in ten attempts now despite drawing with Sale and running Northampton close recently.

There is something brewing in Brentford. At the moment results are not going their way but someone will be on the end of a good beating at this new stadium some time and where there is Jackson there is hope. 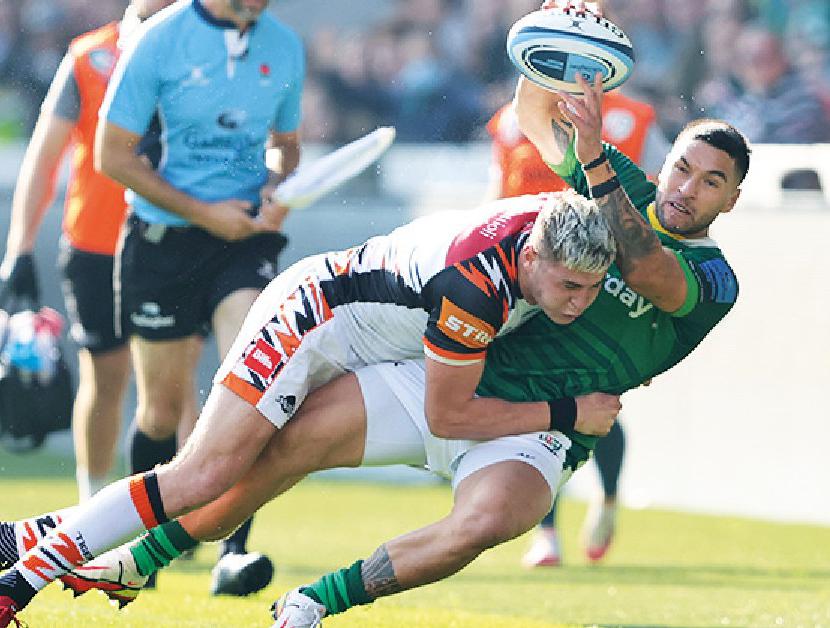 Jackson’s early 50/22 set up a promising position for Irish and once Curtis Rona had burst through midfield Leicester’s defence was stretched. But lock Adam Coleman’s attempted pass to wing Ollie Hassell-Collins was knocked on by Tigers’ fullback Freddie Steward in the tackle and the Leicester man survived the video stewards’ inquiry.

The visitors were misfiring in attack, Ben Youngs bungled a couple of moves, and it was left to man of the moment, hooker Nic Dolly, to get the board clicking on 19 minutes. The hooker was last man up after a lineout drive to give him his fourth try in four games.

Youngs redeemed himself by halting an Irish attack shortly afterwards, sweeping up a loose ball on his try line, but Jackson got the Exiles on the board with a 35m penalty to pull it back to 5-3.

Flanker Ben Donnell gifted Tigers what seemed a certain three-pointer when he came in at the side of a maul but somehow Ford poked it wide from almost in front of the posts.

Jackson nudged Irish in front just before the break, the first time this season they have led at half-time. Then the fly-half showed Ford how it should be done from almost the same spot five minutes after the break to put Irish into a four point lead.

Jackson was then penalised for a deliberate knock on that stopped Hanro Liebenberg’s ball reaching wing Nemani Nadolo and when Ford kicked the penalty to touch the old Leicester lineout drive was out again and the No.8 went over.

Irish flanker Sean O’Brien came off the bench to add his weight to the Irish pack and helped shift them up the pitch before they showed Leicester they could play the driving game.

Jackson turned down a shot at goal and punted to touch, Irish won the lineout and hooker Agustin Creevy came up smiling. But Ford got to work with his boot and Leicester were out of jail.