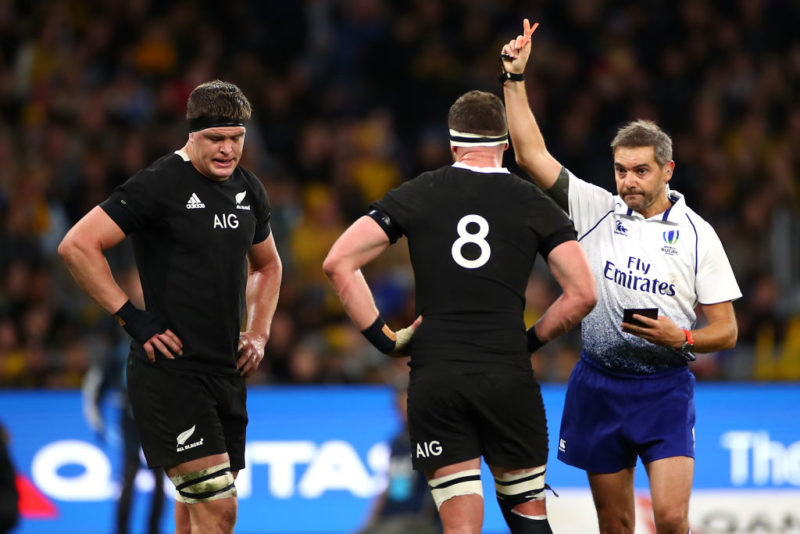 World Cup referees are under renewed instruction to throw the book at players guilty of head hits even if it means a spate of red cards, after All Blacks lock Scott Barrett was sent off for a high tackle in the Bledisloe Cup.

The 25-year-old’s dismissal in Perth on Saturday came only days after World Rugby took action aimed at ensuring a united front throughout the six-week tournament in Japan.

The Rugby Paper understands that a world-wide conference call on the issue involved every aspect of the disciplinary process, citing commissioners, TMO’s and members of the judiciary composed of former referees, coaches and players.

The zero-tolerance attitude, as demonstrated by Jerome Garces’ fearless action during Australia’s 47-26 Bledisloe Cup beating of the World Cup holders, will apply to the barrage of warm-up matches, all 63 of them. Offenders run a severe risk of sitting out the World Cup in a state of suspension.

For all the criticism levelled at him by certain ex-internationals, Garces ought to be applauded for enforcing the law as spelt out in World Rugby’s latest directive on the subject entitlted ‘Decision-making framework for high tackles’.

Referees are told that head contact causing a ‘high degree of danger’ requires a red card, yellow for a low degree.

Garces had seen Barrett’s shoulder-elbow strike Australia flanker Michael Hooper on the side of the head before calling for a video replay.

“It’s clearly dangerous to the head-neck,’’ Garces said. “I have a clear picture (of what happened). He never uses his arm. It’s direct with force.  I have no choice but to give a red card to No. 4 (Barrett).’’

The hard-line policy is under the supervision of World Rugby’s high performance referees’ manager, Alain Rolland.

The Irishman has been at the sharp end, most controversially when he sent Sam Warburton off for a tip-tackle on Vincent Clerc during the 2011 Wales-France semi-final in Auckland.

Warburton was banned for three weeks but Barrett was subject to a ban twice as long.

He is only the fourth All Black to be sent off in a Test in almost 100 years, following Cyril Brownlie (1925), Colin Meads (1964) and Sonny Bill Williams during the last Lions’ series.

The alarming rise in concussion has forced World Rugby to take what they hope will be pre-emptive steps in protecting the game’s showpiece global event from being marred by head injuries as a result of illegal tackles.

Garces is one of 12 World Cup referees and seven assistant referees, all of whom will be in action over the next four weeks before the tournament begins on September 19.