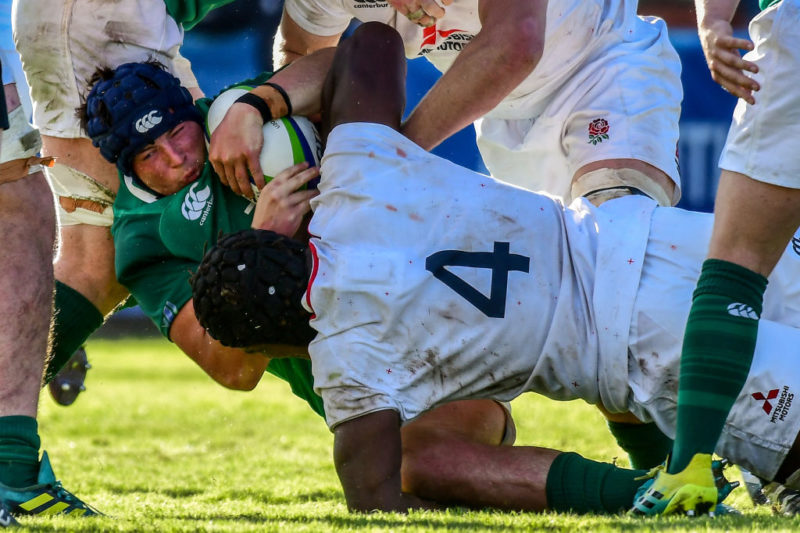 England U20s were sent down to their second defeat to Ireland in 2019, losing 42-26 in their U20 World Championship opener.

A red card to Alfie Barbeary set the tone for ill-discipline to cost England dearly in Santa Fe, Argentina.

They made a bright start against the Six Nations Grand Slam-winners through Northampton Saints wing Ollie Sleightholme to find themselves 10-0 up after 8 minutes.

But in a display of Irish grit, fly-half Jake Flannery and Stewart Moore crossed later in the first-half to hand the 11th seed a narrow 14-13 lead at the break.

Hampered either side of half-time by sin bins to flanker Aaron Hinkley and fly-half Manu Vunipola – both for dangerous tackles – England persevered with a second try for Sleightholme.

But in a tit-for-tat match Ireland responded as three tries were scored during Vunipola’s time in the bin.

Reaching the final in the past six U20 Championships, England trailed Ireland 28-26 when replacement hooker Alfie Barbeary was shown a red card.

The Wasps forward, who has starred in displays for England U18s, sent off for an illegal clearout at the ruck which saw Ireland flanker John Hodnett lifted up and dumped over the horizontal.

Ireland profited from the numerical advantage with replacement fly-half Bean Healy diving over from a scrum and Sean French able to be the extra man needed to make a try-saving tackle on England’s Joel Kpoku.

Hodnett added a try late on for the Emerald isle as Ireland wrapped up victory with 14 unanswered points against the 14 men of England.