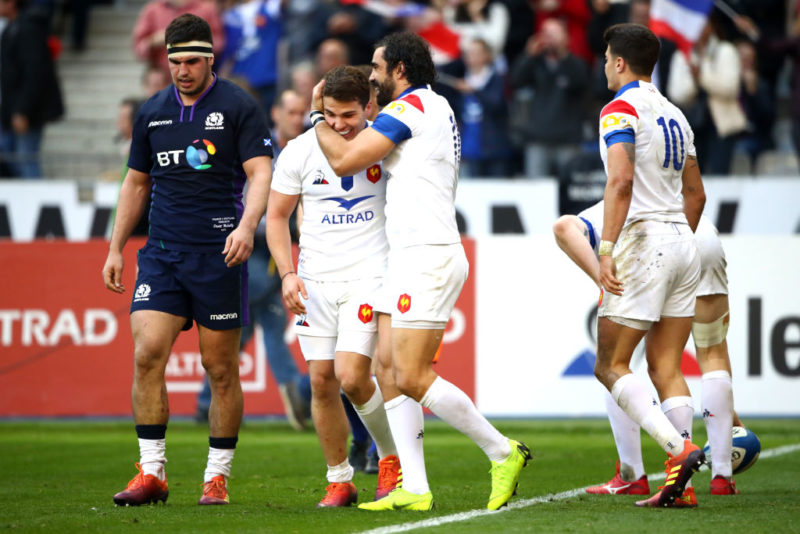 France head coach Jacques Brunel has retained the same squad which delivered a 27-10 bonus-point win against Scotland for Sunday’s trip to face Ireland.

Keeping the faith in young half-back duo Antoine Dupont and Romain Ntamack, Brunel levelled responsibility squarely on the shoulders his forwards for taking the pressure off the pair who have 15 international caps between them.

Going head-to-head against the expected Ireland combination of Conor Murray and Johnny Sexton, Brunel threw down the gauntlet to his pack.

“The context will be different and I hope our pack will put the half-backs in good conditions,” said Brunel.

“We work on our kick defence every week,” Brunel added. “The Irish know how to put you under pressure with high kicks, notably with Murray. We worked on this specifically.”

Tries from Ntamack, Yoann Huget and a double for Gregory Alldritt at the Stade de France gave a vital boost to a France squad who had endured two wretched defeats to Wales and England to begin the Six Nations.

With the kicking game occupying much attention in the lead up to the clash, La Rochelle full-back Thomas Ramos will continue in a back three which includes Huget and Damian Penaud on the wings.

France captain Guillem Guirado is one of only five players who started in the same fixture last year, the others being prop Jefferson Poirot, lock Sebastien Vahaamahina, and flankers Wenceslas Lauret and Arthur Iturria.