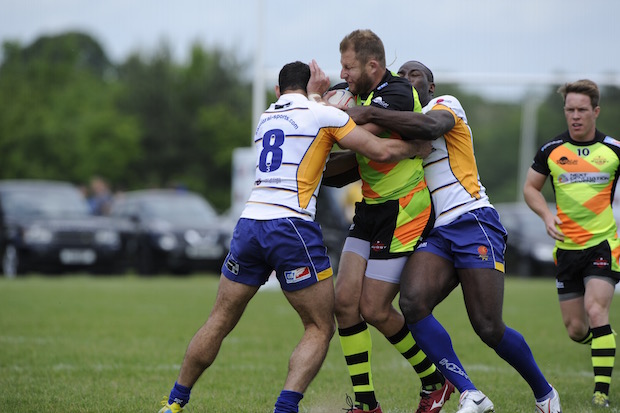 Apache clinched victory in the second round of the GB7s series in dramatic fashion with a kick in the final second to see off reigning champions Samurai.
After falling 14-0 behind in the final at Broadstreet RFC, Adam Hurst’s side looked to be staring at defeat but second half tries from Joe Robinson and Gavin Dampies drew them level before a last gasp Ryan Jeffery penalty secured victory.
It was an emotional day for head coach Hurst who saw his side clinch their first tournament victory during his 18 year reign at the club.
He said: “I set the team up with my brother in 1998 – it’s our 18th season and this is the biggest tournament we have won.
“We’ve been in lots of finals at mid and low level tournaments but it’s the first one we have won.  To get that monkey off our back and to break that duck in such style here to win a GB7s series round is a great feeling.
“It’s very emotional for me to get that big win.”
In the final Samurai started in determined fashion and broke their opponents’ defence seconds before half-time when Chris Banfield ran over.
They seemed to have sealed victory when they went 14-0 ahead through Tom James mid-way through the second half before Robinson pulled a try back for Apache.
Dampies ran over his sides’ second try to set up a grandstand finish which saw the final claxon blow before a last gasp penalty was awarded metres from the posts and Jeffery slotted over the winner to the relief of his coach.
In the third place play-off Irish Wolfhounds beat England IPF 31-7 thanks to tries from Ciaran Wardle, Alex Kane, Terry Kennedy, Eoghan Grace and Ian Fitzpatrick with Jack Barnard scoring in reply.
It was Wailers who clinched the Plate Final with a 33-26 thanks to an emphatic display by leading try scorer for the day Dan Rundle who scored a hat-trick in the final and eight on the day.
The Coventry player who has just signed a two-year contract helped his side come back from 12-7 down with two tries in quick succession.
The result means five sides are in with a chance of lifting the 2015 title when the GB7s Tour concludes in Colwyn Bay on Saturday.