Posted on 15th February 2017 by Nick Verdier in Young Gun 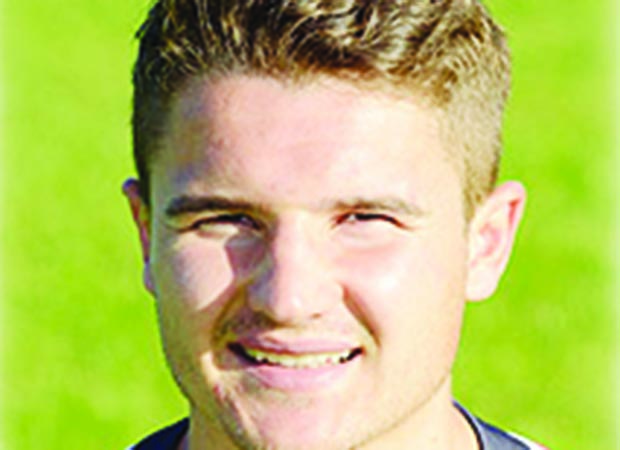 It is but we’re preparing it like any other game really. The weather forecast is giving downpours of rain so we’ll have to make sure our kicking game is on point.

Does it add pressure on you then?

I guess so but it makes decision making easier in a way because you’ve only got two options. You either kick the ball or play a pragmatic one-pass game. There’s no way you’d play too much in those conditions.

That’s the thing about the Championship. It’s very close and there are a lot of teams competing for the play-offs. You can win two games and be in there or lose a couple and end up tenth. You’ve got to concentrate on each game.

No risk of looking too far ahead then?

You do think about what lies ahead at times. But you just have to look at the next game – your focus quickly shifts back to the here and now.

What do you expect from Scottish?

They’re not scared to play with ball at pace. But when we played them earlier this season they kicked the ball a lot to us so we’ll be ready for both scenarios.

How do you assess your season so far?

It’s been quite consistent. We started really well but then had a patch of narrow losses which hampered our record. We’ve never been beaten heavily and that’s a good thing.

We’ve got to play for the full 80 minutes. We lost three games by a point after leading at half-time. If we keep our intensity and physicality all-game long we’re pretty confident we’ll win more than we lose.

Good or bad to have had a week off after your game against London Welsh was cancelled?

I don’t know really but it’s very sad that London Welsh are no more. They’re a very historic club. We only found out on the Wednesday that the game wasn’t going to happen so it didn’t change much for us.

Did you know any of the London Welsh players?

Personally I didn’t but some of the boys at the club did and it was a bit of a shock for them. I just hope they’ll be able to find a new club for the end of the season.

Does it make you think about your own situation?

A little I guess. I’m currently doing an Open University course just in case anything happens. The future looked bleak at Pirates for a while, but we’ve got new investors and things are definitely on the up.

Yes, and it should be ready in a couple of years. The new plan for the club is very exciting.

Could we see the Pirates in the Premiership?

That’s the dream. We’ve got to build a good squad now and be prepared for the big charge once everything is in place.

How good would it be for Cornwall?

It would be massive. Cornwall is a hotbed for rugby and there is a lot of talent. It’d be great to make sure we retain the best players in the county.

How do you look back at your time with Exeter?

I was there for a year in the academy but played for the Pirates on loan. The Chiefs didn’t renew my contract so I made the move to Penzance permanent.

Any regrets about the Chiefs?

Not at all. They’re very successful and it opened my eyes to professionalism. I really enjoy playing for the Pirates now and a lot of what they’re trying to do is similar to Exeter.

Planning for life after rugby already?

I’ve been studying Estate Management for over two years now and I’ve got another two years. It’s a bit of a graft but it’s worth doing.

I try to stick to the nutritionist’s plan but I do like a barbecue chicken pizza.

Best and worst banter at Pirates?

I hate to say it, and he’s going to love reading this, but Alex Day is pretty good. Rob Elloway is the worst, though.

Tom Channon is the best but I’ll give worst to Jack Arnott.