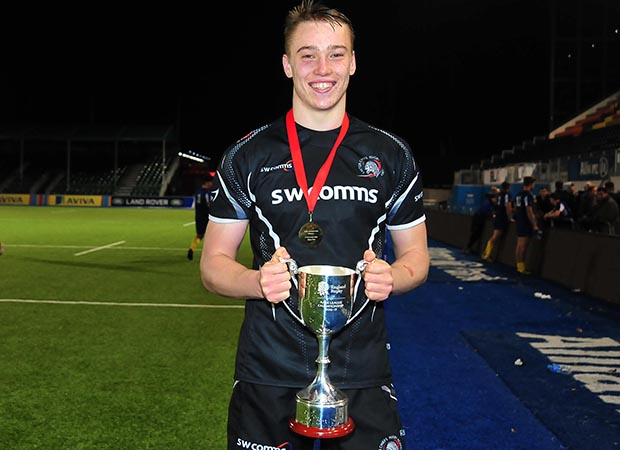 Richard Capstick will not join the Exeter academy full-time for another year but he is not going to wait until then to start conducting his aspiring career like a true professional.
Still aged 16, the back rower has one year left at Exeter College before he links up with the Chiefs and rugby becomes his daily routine.
But breeding players is what helped Exeter climb to the top of English rugby and they’re offering plenty of support to their youngsters with the help of seasoned professionals from their first team squad.
Capstick has already discussed nutrition with Jack Nowell and he is now looking forward to be mentored by England lock Geoff Parling in the New Year.
“I’ve met Geoff a couple of times before but it’ll be great to speak to him one on one and pick his brain to further my knowledge,” he told The Rugby Paper.
“I’m a bit of a lineout geek so I can wait to see how he breaks it down.
“I’m quite a rangy back-rower like Don Armand. I’m quite tall at 6ft 5in but I’m quite light at 96kg. I’m looking to put on a few kilos but not too much so that I can keep my mobility.
“It might seem a bit young to be taking rugby so seriously but that’s what I want to do and Exeter are brilliant in supporting us so we can get a taste of a professional rugby player’s lifestyle.
“To be honest I’m quite driven anyway and I’m desperate to do whatever I can to one day play for the Chiefs’ first team.
“Seeing Jack Maunder, who’s only two years older than me, play in the Champions Cup this season is very motivating for all the youngsters at the club.
“We know that, if we’re good enough, we’ll play.
“I should be at the club full-time once I finish college and then I’ll do my best to be ready to play at senior level as early as I can.”
Capstick has already enjoyed success this season helping Exeter College claim the AASE League title earlier this month and he is now setting his mind to the Premiership Academy league with the Chiefs before potential international honours.
He added: “Winning the AASE League was brilliant. We lost to Hartpury in a very close game but they lost the following week which sent us to the final where we beat the Gosforth Academy.
“That game at Allianz Park was by far the biggest game I’ve ever played in.
“It’s a great stadium and the game was live on YouTube which gave us a taste of how the professionals approach games.
“Hopefully, I can keep my spot in the Chiefs team and maybe get involved in training with the first team when I can.
“We’ve got the academy season coming up and after that I’m hoping to get involved with England U17s.
“We’ve got a game in France which would be a great opportunity for me.”